An inadequate dietary intake of a vitamin, its impaired absorption, or insufficient utilization of an adequate intake, increased dietary requirements, for example in pregnancy, without a corresponding increased intake or an increased excretion of a vitamin give rise to hypovitaminoses.

An inadequate dietary intake of a vitamin, its impaired absorption, or insufficient utilization of an adequate intake, increased dietary requirements, for example in pregnancy, without a corresponding increased intake or an increased excretion of a vitamin give rise tohypovitaminoses. In many cases, the symptoms of a hypovitaminosis can be correlated with the known functions of the vitamin, although in other cases they are rather generalized. Hypovitaminoses often develop over an extended period. Initially there is depletion of body stores with a biochemical impairment, that is a subclinical deficiency. This eventually results in an overt deficiency with frank signs and symptoms and is usually accompanied by other evidence of malnutrition, for example PEM. A covert deficiency does not present with clinical features under normal conditions, but any trauma or stress may precipitate the hypovitaminosis. Starving individuals will suffer from multiple vitamin deficiencies. At the other extreme, an excess of the vitamin can be toxic and may result in a hypervitaminosis.

A deficiency of vitamin B1 or thiamin in some developing countries is common because of the high consumption of foods, such as polished rice, where the vitamin is lost during milling, and in chronic alcoholics, who often have a poor diet. The consequences of a deficiency are depression, irritability, defective memory, peripheral neuropathy and beriberi. Beriberi, which literally means ‘I cannot, I cannot’ in Singhalese, occurs in two forms, which affect different body systems. Dry beriberi mainly affects the nervous system, wet beriberi the heart and circulation; both types usually occur in the same patient but one set of symptoms predominates. Patients with the dry form may present late, with polyneuropathy and Wernicke-Korsakoff syndrome. The polyneuropathy is characterized initially by heavy, stiff legs, then weakness, numbness and paresthesia and absent ankle jerks. Later stages involve the trunk and arms. Wet beriberi, also known as shoshin, from the Japanese for acute heart damage, is less common and characterized by edema. Symptoms appear rapidly with acute heart failure in addition to the polyneuropathy. It is highly fatal and known to cause sudden deaths in young migrant laborers in Asia whose diet consists of white rice.

Vitamin B2 (riboflavin) deficiency is rare in the developed world and usually only seen in alcoholics who normally have diets lacking other nutrients or suffer malabsorption. However, it is a major problem globally affecting some 200 million people, especially children, in developing countries. Other susceptible people include the elderly with a poor diet and regular laxative users. The main metabolic effects are on lipid metabolism, which leads to clinical features of weakness, dermatitis, glossitis, insomnia and sensitivity to bright light, normochromic and normocytic anemia. A deficiency of vitamin B2 is rarely fatal because it is present in most foods, which provide adequate amounts to maintain function, and there is efficient reutilization of the vitamin during the turnover of flavoproteins, so that little is lost.

A deficiency of niacin causes pellagra, where the patients present with weight loss, anemia, dementia, dermatitis and diarrhea. Pellagra can be primary when the diet is deficient in nicotinic acid, such as when maize is the staple, but it can be secondary, where other diseases interfere with absorption. Causes of secondary pellagra include prolonged diarrhea, cirrhosis of the liver, alcoholism and use of isoniazid (Figure 10.29) to treat TB. Isoniazid reacts with vitamin B6 to form an inactive hydrazone and can lead to a deficiency. 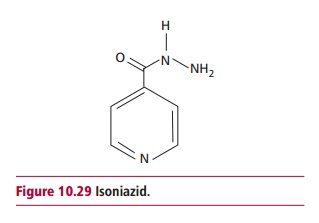 A deficiency of vitamin B5 (pantothenic acid) is rare but has been induced experimentally in animals by feeding a diet virtually devoid of the vitamin or by giving metabolic antagonists, such as V methylpantothenic acid. Symptoms included irritability, fatigue, malaise, GIT problems, muscle cramps and paresthesia. Historically, pantothenic acid deficiency has been implicated in the ‘burning feet’ syndrome experienced by severely malnourished prisoners of war.

A deficiency of vitamin B6 impairs the synthesis of F aminobutyric acid and amino acid metabolism and may be implicated in the development of some cancers . Clinical features associated with a deficiency of vitamin B6 include peripheral neuropathy. However, deficiencies are uncommon because it is widely available. Cases have been reported in infants fed overheated and inadequately fortified milk formula who developed severe symptoms: irritability, opisthotonos, which is an arching of the head, neck and spine backwards, and convulsions that were relieved by vitamin B6 supplements.

A deficiency of vitamin B12 causes megaloblastic anemia and degeneration of the spinal cord. However, deficiencies are generally uncommon, even in cases of severe malabsorption , since considerable amounts of the vitamin are stored in the liver. Deficiencies can occur in strict vegetarians since sources are animal products. When a deficiency does occur, it is seen most commonly in pernicious anemia, an autoimmune disease characterized by lack of intrinsic factor required for absorption of the vitamin from the GIT. Bacterial overgrowth in the GIT or diseases affecting the small intestine, such as Crohn’s disease , can also lead to a deficiency. Elderly people with atrophic gastritis absorb vitamin B12 poorly. However, the first sign of this is neuropathy because the anemia is hidden by folic acid intakes.

Folic acid deficiency is relatively common and occurs because of an inadequate dietary intake in alcoholics and the elderly or because of increased requirements, for example pregnancy and diseases associated with increased cell and nucleic acid turnover, such as leukemia. The deficiency can also arise because of malabsorption and because some drugs affect folic acid metabolism, for example anticonvulsant drugs interfere with its absorption. The major clinical feature of folic acid deficiency is megaloblastic anemia . An increased intake of folic acid before and during pregnancy is associated with a decreased risk of the fetus developing neural tube defects. Taking supplements of folic acid before conception and in the first three months of pregnancy reduces the incidence of spina bifida by more than 20%. In women who have already had a pregnancy affected by a neural tube defect, taking a daily folic acid supplement reduces their chances of a similarly affected pregnancy by approximately 70%. Folic acid supplements are associated with decreased amounts of homocysteine in the plasma with a reduced risk of cardiovascular disease .

Patients suffering a lack of only vitamin H (biotin) are extremely rare. They tend to be individuals who consume extremely large amounts of raw eggs, since the white contains the protein avidin, which binds tightly to biotin (Figure 10.30). The vitamin is not released unless the egg is cooked; 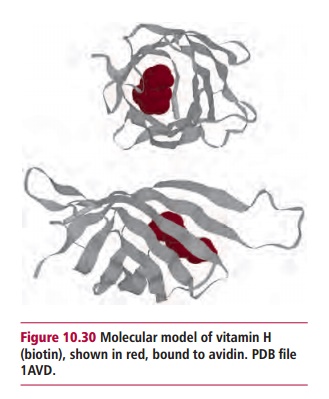 however, more than 20 raw eggs must be consumed daily for this to become a serious problem. Biotin deficiency occasionally occurs in hospital patients on parenteral nutrition and leads to anorexia, nausea, dermatitis and depression.

A lack of vitamin C causes scurvy. Inadequate dietary intake occurs in infants aged six to 12 months who receive processed milk without vitamin C supplements and in the elderly who have vitamin C deficient diets. The clinical features of scurvy include skinpapules, petechial and muscle hemorrhages, poor wound healing, gum disease, anemia and osteoporosis. It has been suggested that vitamin C reduces the incidence, duration and severity of the common cold without any side effects, but there is no scientific evidence for these claims. 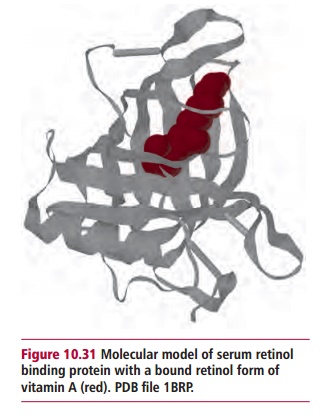 A deficiency of vitamin A is rare in the developed world; indeed, large amounts are stored in the liver and transported around the body bound to retinol-binding protein in the plasma (Figure 10.31). In contrast, deficiencies are major health issues in parts of Africa and South-East Asia. In pregnant women, vitamin A deficiency not only causes night blindness but may increase the risk of maternal mortality. Affected patients may present with anemia and disorders of ectodermal tissues and increased risk of disease and death from severe infections. 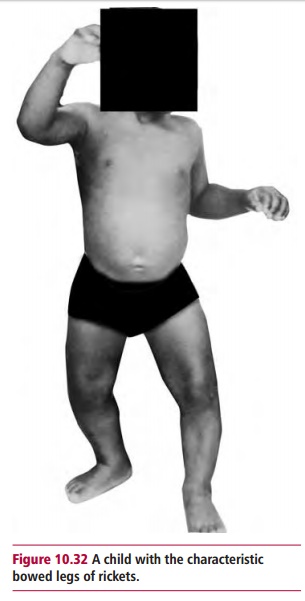 A deficiency of vitamin D impairs mineralization of bone matrix causing rickets in children (Figure 10.32) and osteomalacia in adults. Rickets results in deformities of the legs that bow due to the weight of the body, skull, rib cage and pelvis. During the 1950s, rickets was virtually eradicated in the UK by fortification of infant foods with vitamin D. Unfortunately, some susceptible children suffered vitamin D toxicity and developed hypercalcemia. As a consequence, the amount of vitamin D added to foods was reducedand rickets reappeared. Overt rickets is now rare in the UK, although subclinical rickets affects about 10% of young children. Osteomalacia causes pain in the bones, especially of the pelvis and legs, and there is an increased susceptibility to fractures of the long bones following minor trauma. It is not uncommon in the UK, especially among women of some ethnic origins because of their lack of exposure to sunlight during purdah and the wearing of traditional clothes.

Vitamin E deficiency is rare. When it does occur, it is most likely in newborn children because transfer of vitamin E across the placenta is poor and these children also have less adipose tissue, where most of the vitamin is stored. Deficiencies of vitamin E can occur with long-term parenteral nutrition and in prolonged and severe steatorrhea . Vitamin E deficiency in children causes irritability, edema, hemolytic anemia and neurological dysfunction. Decreased concentrations of plasma vitamin E have been associated with progression of atherosclerosis and growth of some tumors. Other symptoms such as ataxia, dysarthria, sensory loss and paresthesia have been described in adults.

The clinical effects of vitamin K deficiency include a prolonged clotting time and a bleeding tendency as described. A maternal deficiency can lead to serious bone defects in the fetus. Vitamin K deficiency is most common in neonates because it cannot cross the placenta and milk is a poor dietary source so the baby is at risk of bleeding. Newly born babies lack bacteria in their GIT that can synthesize vitamin K, although the significance of intestinal synthesis by bacteria is debatable anyway. For this reason, it has been recommended that all neonates are given a single prophylactic dose of vitamin K. In adults, a deficiency may be seen in fat malabsorption or in people using antibiotics that reduce intestinal bacteria. An inadequate intake may reduce the density of bone and increase the risk of osteoporosis and associated fractures, particularly in postmenopausal women.

Hypervitaminoses are relatively rare compared with deficiencies. An excess of vitamins B6 and niacin can be toxic and is usually associated with excessive intake of vitamin supplements. Large doses of niacin are associated with a variety of clinical problems, including abnormalities of liver functions, hyperglycemia, an increase in plasma uric acid and vasodilation. Daily doses of vitamin B6greater than 500 mg over an extended period can cause a sensory neuropathy.

Most examples of hypervitaminoses are associated with vitamins A and D. Vitamin A is stored in the liver and excessive dietary intake over prolonged periods can lead to a toxic overload. Typical symptoms are pain in the bones, a scaly dermatitis, nausea and diarrhea with enlargements of the liver and spleen. Most cases of vitamin A toxicity are caused by patients overdosing with vitamin supplements. The only natural food known to contain dangerous levels of the vitamin is polar bear liver; not a common dietary item in most societies! Animal studies have shown that vitamin A can produce teratogenic effects when administered in high doses. The consumption of excessively large amounts of vitamin A during pregnancy may increase the risk of congenital malformations.

Excess of vitamin D is, again, largely associated with the overconsumption of vitamin supplements. Toxicity is due to overstimulation of calcium absorption from the gut and excessive resorption from bone which results in its demineralization. The weakening of the bone and hypercalcemia promote metastatic calcification and a tendency in the patient to formkidney stones. 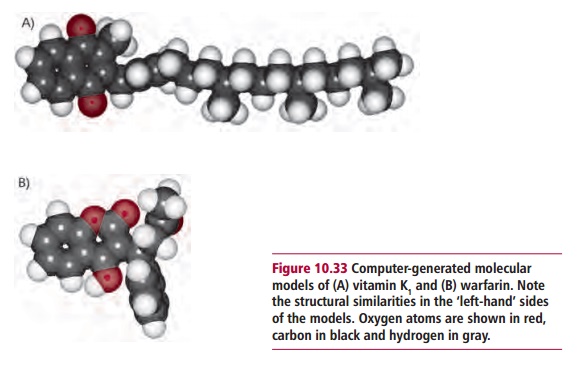