Minerals and trace elements are inorganic dietary substances required to maintain good health. Minerals include calcium, magnesium, sodium, potassium, phosphate, chloride and sulfate. They are present in the body in amounts larger than 5 g and some are required in dietary quantities of more than 100 mg per day and are provided by a variety of foods (Table 10.4). 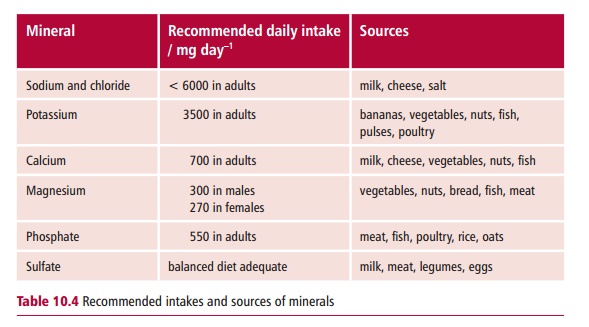 Both groups have diverse functions. Minerals play roles in promoting growth and are important constituents of body tissues such as bone, teeth, hair, skin and nails, and as cofactors in some enzymes and other proteins. Sodium, potassium and chloride are required to maintain the electrolyte and osmotic composition of intra- and extracellular fluids, generate electrochemical gradients across plasma membranes and for nerve conductance and muscle contraction. Calcium is an essential component of bone and teeth, is required for muscle contraction and is a second messenger for some hormones and neurotransmitters. Magnesium is a cofactor for many enzymes, especially those utilizing nucleotides involved in energy metabolism and nucleic acid synthesis. Like calcium, phosphate is needed for bone and teeth formation and is also a component of nucleic acids and phospholipids. It activates a number of enzymes, especially some involved in energy metabolism and is an important renal buffer. Sulfate is required for the synthesis of cartilage and other components of the extracellular matrix. 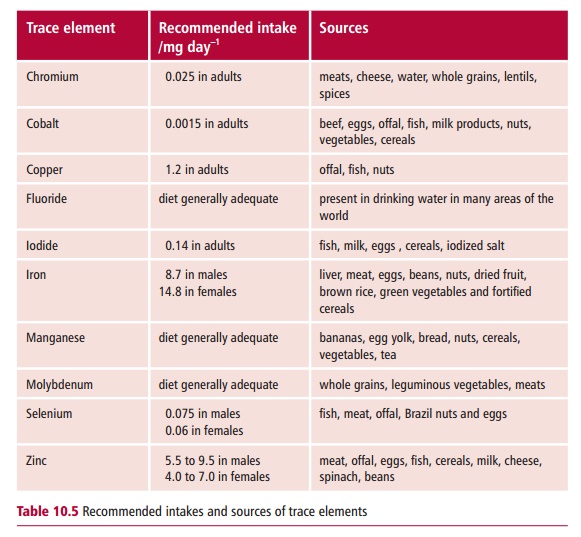 Compared with minerals, trace elements are required in much smaller quantities, but like them are supplied by a variety of foods (Table 10.5). Trace elements include iron, cobalt, copper, molybdenum, chromium, manganese, zinc, selenium, iodide and fluoride. They are present in the body at concentrations less than 100 parts per million and are required in milligrams or even micrograms per day and a number are toxic in excess.

Trace elements have specific and diverse functions. Chromium helps maintain blood glucose concentration by acting as a cofactor for insulin activity. The role of cobalt as a component of vitamin B12, has already been mentioned. Copper is also an essential cofactor for a number of enzymes, including those involved in collagen and elastin synthesis and some redox proteins. Copper is also required for iron absorption and metabolism and hemoglobin synthesis. Fluoride is necessary for the ‘hardening’ of bone and teeth. All the thyroid hormones contain iodine as described. Iron is a component of the prosthetic group, heme found in hemoglobin and myoglobin, where it maintains its oxidation state and binds a dioxygen molecule. Iron is also found in the heme of cytochromes and in nonheme iron proteins involved in electron transfer, where, of course, its oxidation state does alter. Manganese is essential for the activities of a number of enzymes. For example, pyruvate carboxylase and phosphoenolpyruvate carboxykinase function in gluconeogenesis; arginase is a key enzyme of the urea cycle that detoxifies ammonia produced during amino acid metabolism and superoxide dismutase is a major antioxidant defence. Enzymes that contain molybdenum are common and catalyze several reactions in purine metabolism, for example xanthine oxidase, and maintains the synthesis of sex hormones. Selenium is a cofactor in, for example, glutathione peroxidases, and zinc in carbonic anhydrase and RNA polymerase.