Protein-energy malnutrition (PEM) is the name for a spectrum of disorders that arise due to lack of food.

Nutritional disorders can arise from a deficiency or excess of nutrients and may affect growth or cause specific diseases and even death. They are proving to be major health issues. Nutritional disorders can arise from an inadequate intake of food, such as protein-energy malnutrition, or an excessive intake, for example obesity, or due to an inadequate amount of a specific dietary nutrient, such as scurvy in vitamin C deficiency.

Protein-energy malnutrition (PEM) is the name for a spectrum of disorders that arise due to lack of food. Despite the name, affected individuals may not be suffering from a lack of protein, however, because of their deficiency of total energy, dietary proteins that would normally be used for tissue repair or growth are used as a fuel. In addition, vitamin and mineral intakes are usually inadequate. In the developed world, PEM is rare and is usually associated with solitary elderly patients who are malnourished or with children suffering from neglect. The clinical features of PEM vary depending upon the severity, from the merely underweight to two major conditions, marasmus and kwashiorkor (Margin Note 10.2 and Table 10.6). Protein-energy malnutrition can also be life threatening in that it increases susceptibility to infectious diseases that would not normally be lethal. 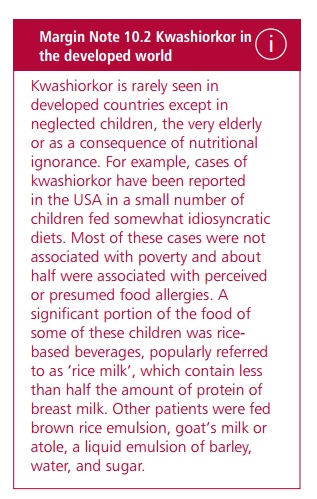 Marasmus is a chronic disorder that develops over a period of months to years and is caused by an inadequate energy intake (Figure 10.21). It occurs 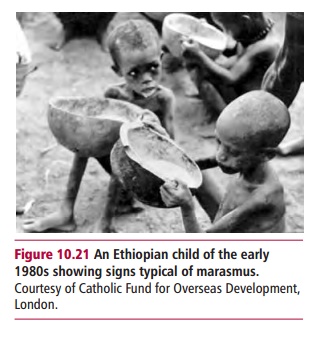 in epidemics due to famine and is endemic in many areas of Africa, Asia and South America, and in patients with long-term illnesses, such as chronic pulmonary disease and anorexia nervosa (see later). Children with marasmus fail to thrive, are emaciated and lack subcutaneous fat. Cachexia, muscle wastage associated with some chronic infections, such as tuberculosis , or the severe and prolonged weight loss seen in some cancers produces similar clinical features to marasmus but the etiologies are different. 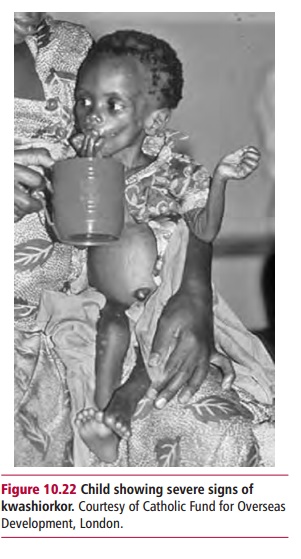 The name, kwashiorkor is derived from one of the Kwa languages of Ghana and means ‘the one who is displaced’ and reflects the development of a nutritional condition in children typically three to five years old who have been abruptly weaned when a new sibling is born (Figure 10.22). Kwashiorkoris common in parts of the world affected by famine and where there is poor education and knowledge of nutrition. In the original description of kwashiorkor in children of the Gambia reported in 1932, Williams (1894– 1992) implied that a deficiency of protein was its major cause, even when the energy input was adequate. Since then, a number of explanations for the development of kwashiorkor have been proposed. Environmental toxins, such as aflatoxins from moldy foods, general conditions of overcrowding and poverty, a lack of other key nutrients and high rates of disease have all been implicated. A combined protein and energy deficiency, although important, is not the key factor and it is generally accepted that the condition is likely to be due to deficiency of one of several nutrients, including copper, selenium, zinc and the vitamins folic acid, C, A, Acarotene and E that are associated with oxidative stress management. It is likely that infectious diseases are the precipitating factor because children with reduced antioxidant status exposed to the stress of an infection are most liable to develop kwashiorkor. Further, kwashiorkor usually occurs following infectious conditions, such as diarrhea, or diseases, for example measles, indicating that its causes are not purely nutritional. Invading pathogens trigger a macrophage respiratory burst  that considerably increases the total free radical load of the patient and this may be the start of events that result in kwashiorkor. Unfortunately, its causes are still not fully known; siblings in the same household and on the same type of diet may develop marasmus or kwashiorkor. However, lower concentrations of the antioxidants A carotene, glutathione and vitamin E are observed in children suffering from kwashiorkor than in those affected by marasmus; both of course, have reduced levels compared with healthy children.

A significant feature of kwashiorkor is a large protruding abdomen due to edema and an enlarged liver. The edema is traditionally thought to occur because an inadequate intake of protein leads to a reduced plasma albumin concentration, which in turn causes edema, although electrolyte disturbances, such as potassium deficiency and sodium retention, are also thought to play a role. The hepatomegaly occurs from a large infusion of fats into the liver; the cause of which is unknown. Early features of kwashiorkor include fatigue, irritability, lethargy, stunted growth, muscular wasting, edema in the lower limbs and impaired neurological development. The skin may be affected by dermatitis and have areas of hypo- or hyperpigmentation and thin, brittle, light colored hair that is easily pluckable. The patients may also present with delayed wound healing and anemia. If untreated, kwashiorkor can result in shock, coma and death, with a mortality rate as high as 60%. In the long term, it can lead to impaired physical and mental development.