Minerals and trace elements are necessary for numerous and diverse metabolic activities. Clinical disorders arising from deficiencies in the dietary intakes of minerals are not uncommon and a number are described.

Minerals and trace elements are necessary for numerous and diverse metabolic activities. Clinical disorders arising from deficiencies in the dietary intakes of minerals are not uncommon and a number are described. Conditions caused by excessive mineral ingestion are less common but several are also outlined.

The total quantity of any one trace element in the body is usually less than 5 g and these elements are often required in quantities of less than 20 mg per day, hence dietary deficiencies are uncommon. Chromium deficiency can occur in patients on parenteral nutrition without adequate supplementation and leads to glucose intolerance. An excess of chromium (II) has no known symptoms, although chromium (III) and especially chromium (VI) compounds are toxic. A deficiency of cobalt is rare and causes indigestion, diarrhea, weight loss and a loss of memory. An excess of cobalt is not associated with any known symptoms, although a high intake over a prolonged period may lead to infertility in men. In addition, there are occasional reports of cobalt cardiomyopathy following occupational exposure.

Copper deficiency is uncommon, except in patients on synthetic oral or on long-term parenteral nutrition. It can occur in infants because of malnutrition, malabsorption, chronic diarrhea or prolonged feeding with low copper milk diets. Premature infants are particularly susceptible because of their low copper stores in the liver. Copper deficiency causes neutropenia and hypochromic anemia in the early stages, both of which respond to dietary copper but not iron. This is followed by bone abnormalities such as osteoporosis, decreased pigmentation of the skin, pallor and neurological abnormalities in the later stages. A dietary excess of copper is rare but occasionally happens following food contamination and causes salivation, stomach pain, nausea, vomiting and diarrhea. 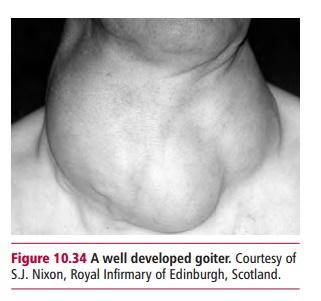 Nearly half of dietary fluoride is taken up by bone and can influence its mechanical properties. The incorporation of fluoride in tooth enamel as fluorapatite makes teeth more resistant to dental caries as it resists breakdown by acids. Fluoride deficiency leads to impaired bone formation and dental defects.

Iodine deficiency causes an enlargement of the thyroid gland called goiter (Figure 10.34), while a prolonged deficiency in children can lead to cretinism . Iodine deficiency is commonest in upland areas with thin limestone soil because minerals, such as iodine are easily leached from these types of soils and plants in the area are iodine deficient. The situation is exacerbated if commercial iodized salt is not available. In some areas of Africa, Brazil and the Himalayas, more than 90% of the population may develop goiter due to iodine deficiency. Excessive intake of dietary iodide can also lead to goiter. This is most commonly seen in Japanese communities who have a high dietary intake of seaweed.

A lack of iron leads to anemia, which is described. Increased intake of dietary, medicinal or transfused iron can cause  hemosiderosis, characterized by deposits of iron compounds in organs such as the liver and heart. Acute ingestion of large doses of ferrous salts can be fatal, particularly in children under the age of two. Manganese deficiency is rare but is believed to cause ataxia, hearing loss and dizziness. Inhalation of dust from mining and other industrial sources can lead to manganese toxicity and causes severe neurological dysfunction, similar to Parkinson’s disease . A dietary deficiency of molybdenum has not been reported. However, molybdenum deficiency was noted in a patient on parenteral nutrition who suffered from mental disturbances that progressed to coma. Supplementation of molybdenum improved the patient’s clinical condition. Levels of manganese in food and water must exceed 100 mg kg–1 body weight to produce manganese toxicity. However, few data are available but the major signs include diarrhea and anemia. The high concentrations are thought to stimulate xanthine oxidase, leading to increased serum uric acid and gout .

Selenium deficiency results from a low dietary intake in parts of the world with soils of low selenium content and has been reported in patients on long-term parenteral nutrition. A deficiency of selenium may lead to a cardiomyopathy. In China, this is called Keshan’s disease and affects young women and children in selenium deficient regions and although selenium deficiency is a basic factor in Keshan’s disease, its occurrence is seasonal and it is associated with viral infections that cause inflammation of the heart. Prophylactic selenium prevents the disease developing but selenium supplements do not reverse heart muscle damage. A large intake of selenium causes selenosis, a condition characterized by loss of hair, skin and nails.

Zinc deficiency is relatively common in populations in rural areas of the Middle East and subtropical and tropical areas where unleavened whole wheat bread can provide up to 75% of the energy intake. The little zinc in wheat is bound by the relatively large amounts of phytic acid and fiber present that inhibit its absorption. This is not a problem in leavened bread, as yeasts produce phytases that inactivate the phytic acid. Zinc deficiency also occurs during prolonged parenteral nutrition if inadequate amounts are provided. A deficiency is associated with a period of severe catabolism, as would occur in PEM. A severe deficiency occurs in the skin condition acrodermatitis enteropathica, where there is an inherited defect in GIT zinc absorption. A deficiency of zinc delays the onset of puberty. High doses of zinc reduce the amount of copper the body can absorb causing anemia and weakness of the bones.