Vitamins are organic substances that the body cannot synthesize or can make only from chemically closely related compounds.

Vitamins are organic substances that the body cannot synthesize or can make only from chemically closely related compounds. They are needed in the diet but only in relatively small amounts (Table 10.3). 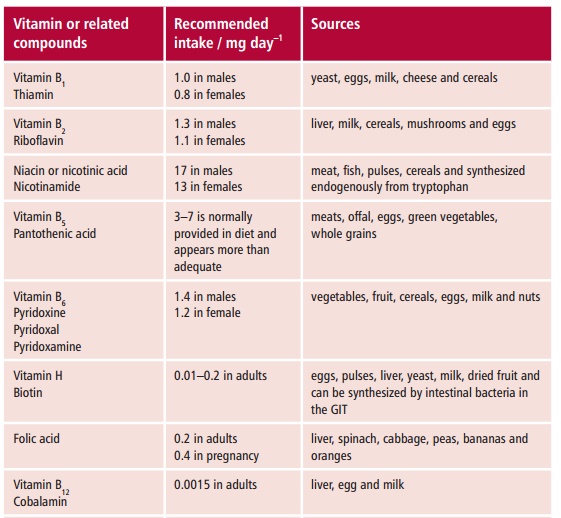 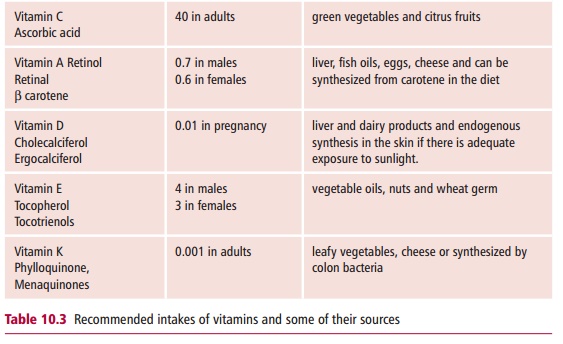 Vitamins may be classified as water soluble, such as the B group and vitamin C (Figure 10.9) and fat soluble, such as the vitamins A, D, E and K. Some of the B vitamins and, in general, each fat soluble vitamin comprise a group of closely related compounds called vitamers. In such cases, the name of the vitamin is used as a collective descriptor. Vitamins have specific biochemical roles and are essential for normal metabolism, growth and good health. 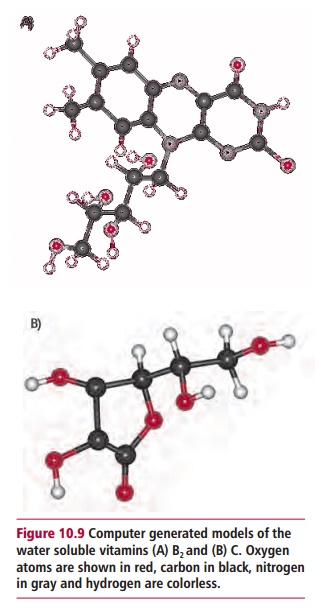 Vitamin B1 or thiamin is an essential component of the coenzyme or prosthetic group, thiamin pyrophosphate (TPP, Figure 10.10). This is necessary for the actions of some enzymes, for example transketolase activity of the pentose phosphate pathway for oxidizing glucose and oxidative decarboxylations catalyzed by pyruvate and 2-oxoglutarate dehydrogenases in carbohydrate metabolism. Thiamin is therefore necessary for the metabolic formation of ATP, the major energy carrier in metabolism, and NADPH. Thiamin pyrophosphate is also known to function in nerve conductance. Vitamin B2 or riboflavin is also required to form coenzymes or prosthetic groups, in this case flavin mononucleotide (FMN, Figure 10.11 (A)) and flavin dinucleotide (FAD, Figure10.11 (B)), which function as electron carriers in flavoproteins. The flavoproteinsare extremely numerous and include renal L-amino acid oxidase, NADH reductase, 2-hydroxyacid oxidase (FMN) and D- and L-amino acid oxidases, succinate dehydrogenase and glutathione reductases (FAD). Hence riboflavin is essential to many oxidation and reduction reactions in, for example, the TCA cycle, electron transport and the oxidation of fatty acids in mitochondria. 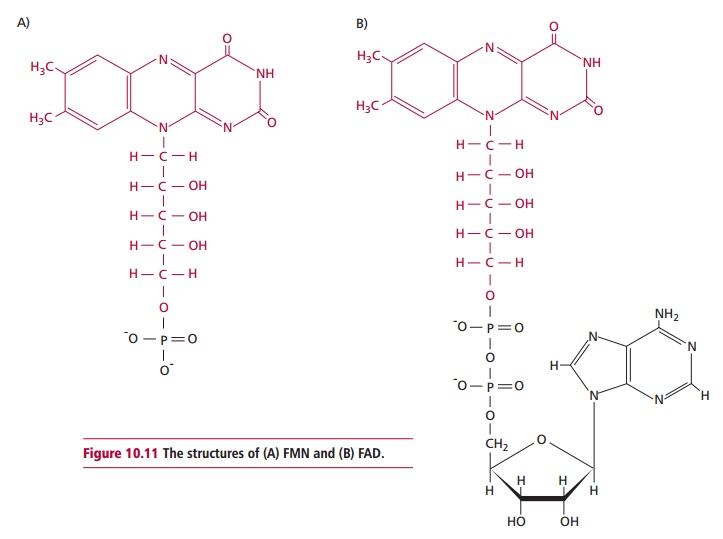 Nicotinic acid and nicotinamide are vitamers of niacin, which strictly is not a vitamin since limited amounts of it can be synthesized from tryptophan. Niacin is required to form coenzymes NAD+ and NADP+ (Figure 10.12) whichare electron and hydrogen carriers. The former is crucial in electron transport associated with oxidative phosphorylation and ATP formation, the reduced form of NADPH is essential to the biosynthesis of, for example sugars, lipids, amino acids and nucleotides. 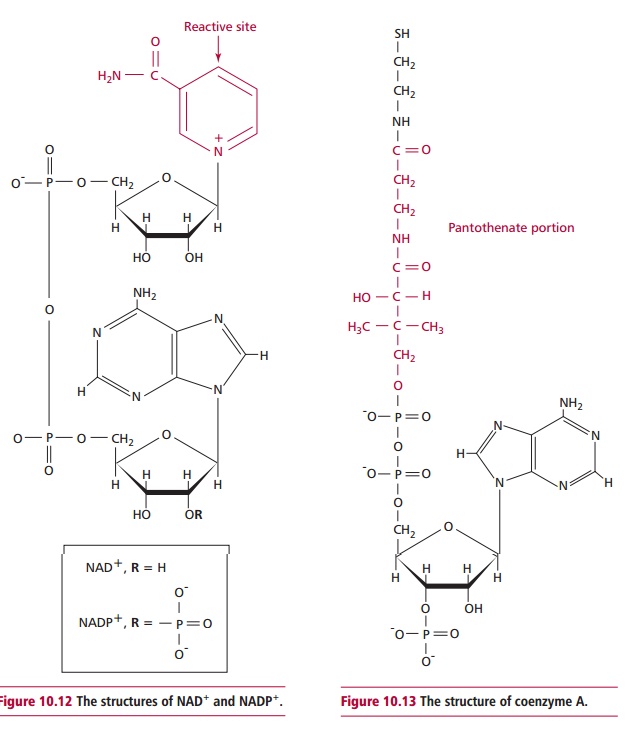 Vitamin B5 or pantothenic acid is an essential part of coenzyme A (Figure 10.13), which is the major carrier of metabolically active acyl (fatty acid residues) in metabolism. Thus it is essential to many of the reactions involved in the oxidation of lipids and in the synthesis of lipids including steroid hormones, some neurotransmitters and hemoglobin.

The vitamers pyridoxine, pyridoxal and pyridoxamine all have vitamin B6 activity (Figure 10.14), forming pyridoxal 5-phosphate, which is a cofactor for a number of enzymes. These include glutamate decarboxylase that catalyzes the formation of F aminobutyric acid, a neurotransmitter of the central nervous system, and enzymes that catalyze transamination and decarboxylation reactions of amino acids. Vitamin B6 is therefore essential for the synthesis of nonessential amino acids and in the catabolism of amino acids. Pyridoxal 5-phosphate is also a cofactor for glycogen phosphorylase of liver and muscle tissues and helps regulate the actions of steroid hormones by participating in the dissociation of hormone–receptor complexes from DNA. 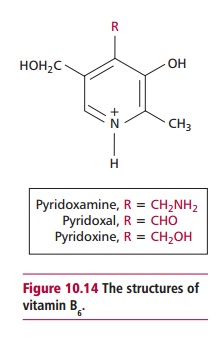 Vitamin B12 or cobalamin is an unusual molecule in that it contains an organometallic bond between cobalt and carbon (Figure 13.18 (A)). A close relationship exists between the functions of vitamin B12 and folic acid and, to some extent at least, they depend on each other for activation. Organic one carbon groups, for example methyl (CH3–), methylene (–CH2-), methenyl (–CH=), formyl (–CHO), formate (–COO–) and formino (–CHNH), are generally toxic. In metabolism, they are bound to carriers derived from vitamin B12 and folic acid, which allows them to be converted to different oxidation states and used in a variety of different reactions in a nontoxic manner. These reactions are necessary for the catabolism of some amino acids, for the formation of a number of proteins and the synthesis of purine and pyrimidine bases and therefore nucleotides and nucleic acids. Unlike vitamin B12 and folic acid that carry organic one carbon compounds, vitamin H or biotin (Figure 10.15) is required to form the prosthetic group that carries CO2 in a number of enzymes. These include acetyl CoA carboxylase and pyruvate decarboxylase which are key enzymes of fatty acid synthesis and gluconeogenesis, the production of glucose from noncarbohydrate precursors. 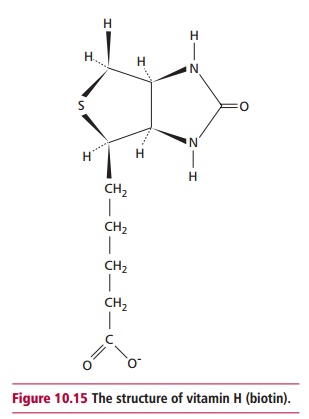 Vitamin C or ascorbic acid (Figure 10.16) is required to reduce metal ions in a number of enzymes following catalysis. Prolyl and lysyl hydroxylases contain Fe2+(II) which is oxidized to Fe3+(III) during hydroxylation reactions involved in cross-linking collagen molecules, which adds strength to connective tissues. Ascorbate reduces their iron back to the ferrous state, regenerating an active enzyme. Similarly, the Cu2+(II) in enzymes involved in synthesis of catecholamine hormones is returned to the Cu+(I) state following the oxidation of the copper during catalysis. The antioxidant properties of ascorbic acid, in association with vitamin E, help protect lipids in the cell membranes and blood lipoproteins from oxidative damage. It also enhances the absorption of iron and regulates the absorption of copper from the GIT. 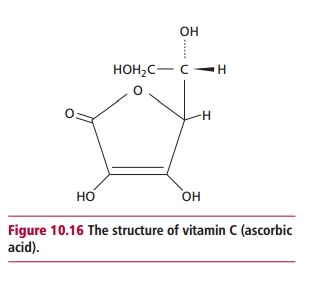 Several vitamers, retinol, retinaldehyde or retinal and retinoic acid, show vitamin A activities. Retinol (Figure 10.17 (A)) can be metabolically converted to retinaldehyde, which, in turn can be oxidized to retinoic acid. In addition, the provitamin A carotenoids, for example A carotene (Figure 10.17 (B)), can be converted to active forms in the liver. Retinoic acid helps regulate the proliferation and development of cells in a tissue specific manner that resembles the actions of steroid hormones . It binds to nuclear receptors, which then interact with DNA and activate specific genes. Vitamin A is associated with the development of epithelial cells, such as the skin and the mucosal membranes that cover internal and external surfaces of the body and have numerous functions, for example, as structural barriers that

prevent microorganisms from entering the body . Retinaldehyde is necessary for vision and functions as the prosthetic group (visual pigments) of opsin proteins in light-sensitive retinal cells. Vitamin A is a weak antioxidant that can protect against free radical damage. There is some evidence that A carotene reduces the incidence of cardiovascular disease and some forms of cancer.

The usual dietary form of vitamin D is cholecalciferol (Figure 10.18), although this is not strictly a vitamin since it can be formed by ultraviolet irradiation of the skin from 7-dehydrocholesterol. Foods are sometimes fortified with the synthetic ergocalciferol, which has the same biological activity as cholecalciferol. Enzyme-catalyzed hydroxylations yield the active metabolites 1@, 25 dihydroxycholecalciferol and calcitriol respectively. Vitamin D mainly functions in the homeostasis of calcium as described. 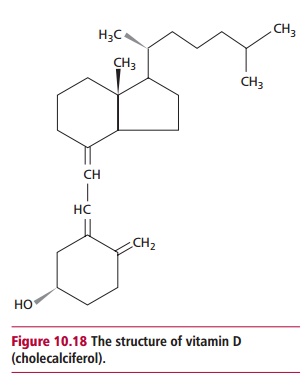 Vitamin E is generally used to describe the tocopherols and tocotrienols that comprise a number of vitamers of differing biological potencies, of which the most active is @ tocopherol (Figure 10.19 (A) and (B)). Like vitamins A and D, vitamin E also has a role in regulating gene expression, although a receptor has yet to be found, and also in signal transduction. A major function generally ascribed to vitamin E is to protect cellular membranes against free radicals  and prevent the oxidation of plasma lipoproteins, especially low density lipoproteins . The corresponding reduction of the vitamin produces a relatively unreactive and therefore less damaging tocopheroxyl radical. This is also relatively long lived and so persists sufficiently long to be reoxidized back to the active form by vitamin C or glutathione peroxidases. However, the utility of this mechanism has been challenged and it has been suggested that the antioxidant role is more restricted and arises from an inhibition of NADPH oxidase and so reduces the production of radicals, such as superoxide. 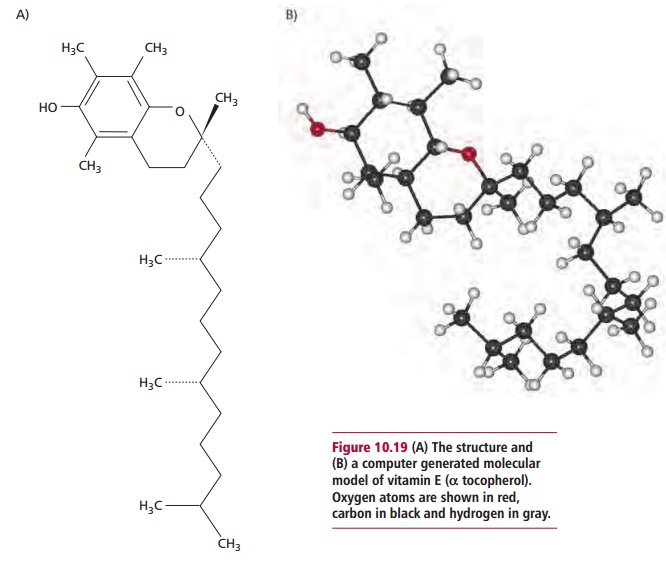 A number of compounds are possible vitamers of vitamin K, including phylloquinone and the menaquinones. The first is the normal dietary source, while the menaquinones are a group of compounds with similar structures synthesized by GIT bacteria. Phylloquinone (Figure 10.20) is metabolically necessary for the conversion of glutamate residues in some proteins to F carboxyglutamates. This is necessary for the synthesis of some blood clotting factors, which are described, and some proteins of the bone matrix. The ability of menaquinones to function as vitamin K is unclear; they may partially satisfy the human requirements for vitamin K but their contribution is probably much less than previously thought.