Each of the cell organelles mentioned in the preceding section has a specific function in cell metabolism.

Each of the cell organelles mentioned in the preceding section has a specific function in cell metabolism. The interplay of the metabolic processes in the various compartments requires a transfer of substances across the mem-branes of these cell organelles as well as between the different cells. This transfer of compounds takes place in various ways: by specific translocators, channels, pores, via vesicle transport, and in a few cases (e.g., CO2 or O2) by non-specific diffusion through membranes. The vesicle transport and the function of the plasmodesmata have already been described. 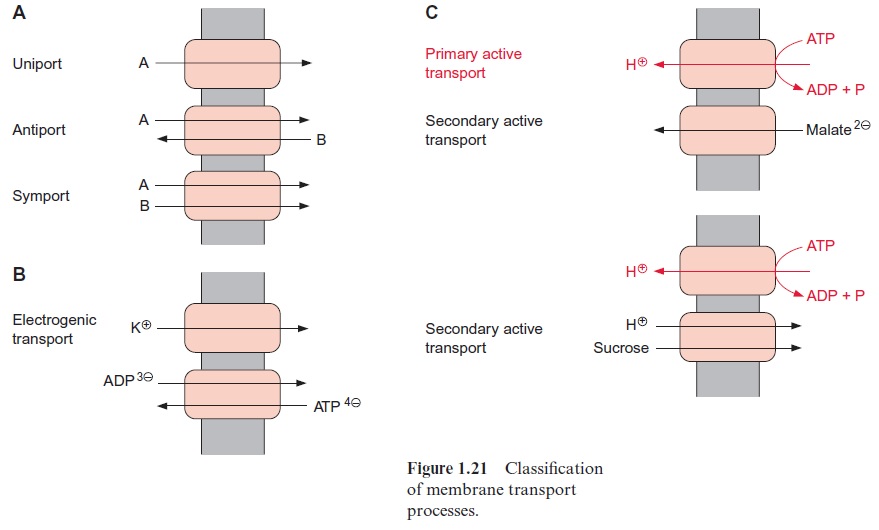 Figure 1.21 illustrates various types of transport processes according to formal criteria. When a molecule moves across a membrane independent of the transport of other molecules, the process is called uniport, and when counter-exchange of molecules is involved, it is called antiport. The manda-tory simultaneous transport of two substances in the same direction is called symport. A transport via uniport, antiport, or symport, in which a charge is simultaneously moved, is termed electrogenic transport. A vectorial trans-port, which is coupled to a chemical or photochemical reaction, is named active or primary active transport. Examples of active transport are the trans-port of protons driven by the electron transfer of the photosynthetic electron transport chain  or the respiratory chain  or by the consumption of ATP (Fig. 1.21C). Such proton transport is electrogenic; the transfer of a positive charge results in the formation of a membrane poten-tial. Another example of primary active transport is the ATP-dependent transport of glutathione conjugates into vacuoles.