Peroxisomes, also termed microbodies, are small, spherical organelles with a diameter of 0.5 to 1.5 μm.

Peroxisomes, also termed microbodies, are small, spherical organelles with a diameter of 0.5 to 1.5 μm (Fig. 1.14), which, in contrast to plastids and mitochondria, are enclosed by only a single membrane. The peroxisomal matrix represents a specialized compartment for reactions in which toxic intermediates are formed. Thus peroxisomes contain enzymes catalyzing the oxidation of substances accompanied by the formation of H2O2, and also contain catalase, which immediately degrades H2O2. Peroxisomes are a common constituent of eukaryotic cells. In plants perox-isomes occur in two important differentiated organelle types: the leaf per-oxisomes(Fig. 1.14A), which participate in photorespiration ; and the glyoxysomes (Fig. 1.14B), which are present in seeds containing oils (triacylglycerols) and play a role in the conversion of triacylglycerols to carbohydrates. They contain all the enzymes for fatty acid β- oxidation. Peroxisomes multiply by division, but it has also been observed that they can be generated de novo from vesicles of the endoplasmic reticulum. Since peroxisomes do not have a genome of their own, it seems rather improbable that they descend from a prokaryotic endosymbiont like mitochondria and chloroplasts. Phylogenetic analyses suggest that peroxi-somes are derived from the endoplasmic reticulum of an early eukaryote. 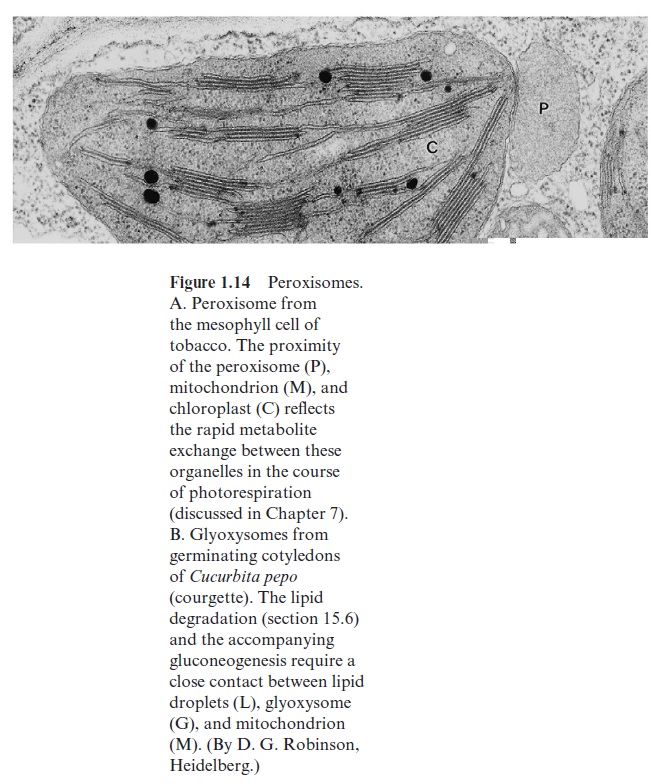