Plastids have evolved from cyanobacteria

Plastids are cell organelles which occur only in plant cells. They multiply by division and in most cases are maternally inherited.

Plastids have evolved from cyanobacteria

Plastids are cell organelles which occur only in plant cells. They multiply by division and in most cases are maternally inherited. This means that all the plastids in a plant usually have descended from the proplastids in the egg cell. During cell differentiation, the proplastids can differentiate into green chloroplasts, colored chromoplasts, and colorless leucoplasts. Plastids possess their own genome, of which many copies are present in each plas-tid. The plastid genome (plastome) has properties similar to that of the prokaryotic genome, e.g., of cyanobacteria, but encodes only a minor part of the plastid proteins; most of the chloroplast proteins are encoded in the nucleus and are subsequently transported into the plastids. The proteins encoded by the plastome comprise enzymes for replication, gene expres-sion, and protein synthesis, and part of the proteins of the photosynthetic electron transport chain and of the ATP synthase. 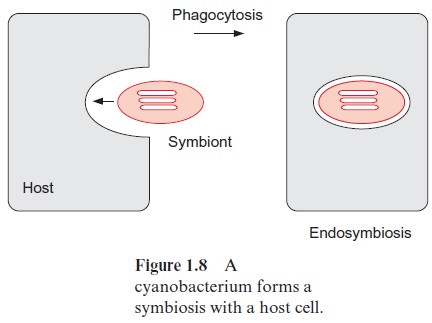 As early as 1883 the botanist Andreas Schimper postulated that plas-tids are evolutionary descendants of intracellular symbionts, thus founding the basis for the endosymbiont hypothesis. According to this hypothesis, the plastids descend from cyanobacteria, which were taken up by phagocy-tosis into a host cell (Fig. 1.8) and lived there in a symbiotic relationship. Through time these endosymbionts lost the ability to live independently because a large portion of the genetic information of the plastid genome was transferred to the nucleus. Comparative DNA sequence analyses of proteins from chloroplasts and from early forms of cyanobacteria allow the conclusion that all chloroplasts of the plant kingdom derive from a symbi-otic event. Therefore it is justified to speak of theendosymbiotic theory.

Proplastids (Fig. 1.9A) are very small organelles (diameter 1 to 1.5  µm). They are undifferentiated plastids found in the meristematic cells of the shoot and the root. They, like all other plastids, are enclosed by two membranes forming an envelope. According to the endosymbiont theory, the inner enve-lope membrane derives from the plasma membrane of the protochlorophyte and the outer envelope membrane from plasma membrane of the host cell. 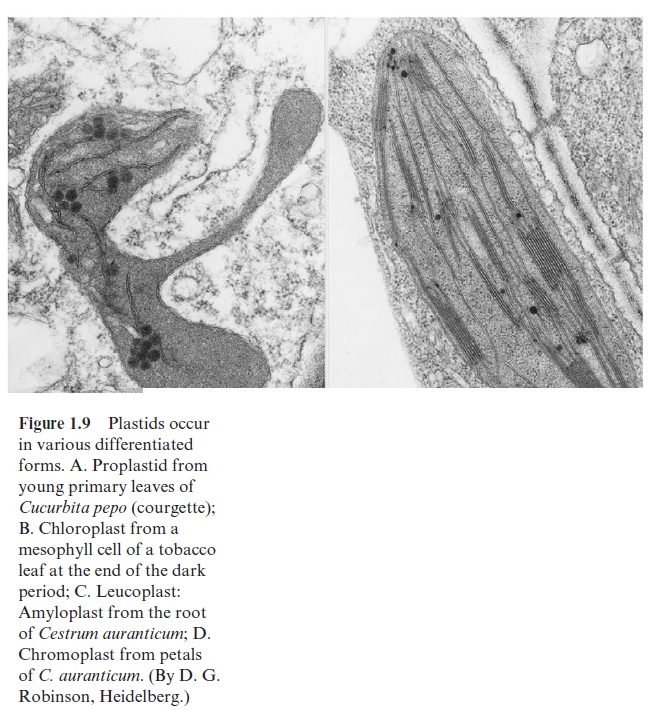 Chloroplasts (Fig. 1.9B) are formed by differentiation of the proplastids (Fig. 1.10). In greening leaves etioplasts are formed as intermediates during this differentiation. A mature mesophyll cell contains about 50 to 100 chlo-roplasts. By definition chloroplasts contain chlorophyll. However, they are not always green. In blue and brown algae, other pigments mask the green color of the chlorophyll. Chloroplasts are lens-shaped and can adjust their position within the cell to receive an optimal amount of light. In higher plants their length is 3 to 10  µm. The two envelope membranes enclose the stroma. The stroma contains a system of membranes arranged as flattened sacks (Fig. 1.11), which were given the name thylakoids (in Greek, sac-like) by Wilhelm Menke in 1960. During differentiation of the chloroplasts, the inner envelope membrane invaginates to form thylakoids, which are sub-sequently sealed off. In this way a large membrane area is provided for the photosynthesis apparatus . The thylakoids are connected to each other by tube-like structures, forming a continuous compartment. Many of the thylakoid membranes are squeezed very closely together; they are said to be stacked. These stacks can be seen by light microscopy as small particles within the chloroplasts and have been named grana. 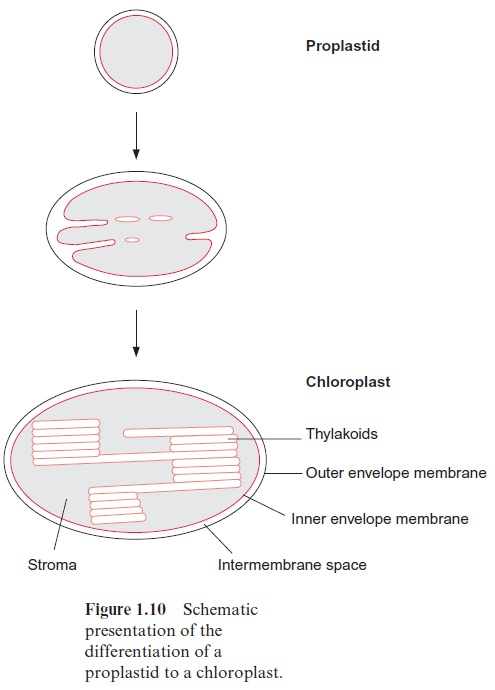 The stroma of chloroplasts contains starch grains. This starch serves mainly as a diurnal carbohydrate stock, the starch formed during the day being a reserve for the following night. Therefore at the end of the day the starch grains in the chloroplasts are usually very large and their sizes decrease during the following night. The formation of starch in plants always takes place in plastids.

Often structures that are not surrounded by a membrane are found inside the stroma. They are known as plastoglobuli and contain, among other substances, lipids and plastoquinone. A particularly high amount of plastoglobuli is found in the plastids of senescent leaves, containing degraded products of the thylakoid membrane. About 10 to 100 identical plastid genomes are localized in a special region of the stroma known as the nucleoide. The ribosomes present in the chloroplasts are either free in the stroma or bound to the surface of the thylakoid membranes. 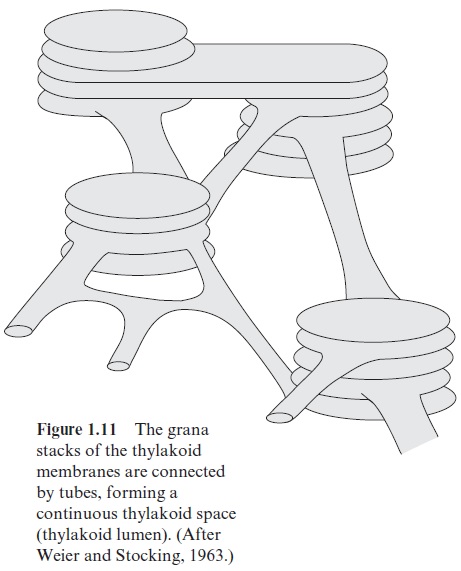 In leaves grown in the dark (etiolation), e.g., developing in the soil, the plastids are yellow and are termed etioplasts. These etioplasts contain some, but not all, of the chloroplast proteins. The lipids and membranes form prolammelar bodies (PLB) which exhibit pseudo crystalline struc-tures. The PLB function as precursors for the synthesis of thylakoid mem-branes and grana stacks. Carotenoides give the etioplasts the yellow color. Illumination induces the conversion from etioplasts to chloroplasts; chlo-rophyll is synthesized from precursor molecules (protochlorophyllide) and thylakoids are formed.

Leucoplasts (Fig. 1.9C) are a group of plastids that include many dif-ferentiated colorless organelles with very different functions (e.g., the amy-loplasts), which act as a store for starch in non-green tissues such as roots, tubers, or seeds . Leucoplasts are also the site of lipid biosyn-thesis in non-green tissues. Lipid synthesis in plants is generally located in plastids. The reduction of nitrite to ammonia, a partial step of nitrate assimilation , is also always located in plastids. When nitrate assimilation takes place in the roots, leucoplasts are the site of nitrite reduction.

Chromoplasts (Fig. 1.9D) are plastids that, due to their high carotenoid content (Fig. 2.9), are colored red, orange, or yellow. In addition to the cytosol, chromoplasts are the site of isoprenoid biosynthesis, including the synthesis of carotenoids . Lycopene, for instance, gives toma-toes their red color.