The difference between plant cells and animal cells is that plant cells have a cell wall. This wall limits the volume of the plant cell.

The difference between plant cells and animal cells is that plant cells have a cell wall. This wall limits the volume of the plant cell. The water taken up into the cell by osmosis presses the plasma membrane against the inside of the cell wall, thus giving the cell mechanical stability. The cell walls are very complex structures; inArabidopsis about 1,000 genes were found to be involved in its synthesis. Cell walls also protect against infections.

The cell wall consists mainly of carbohydrates and proteins

The cell wall of a higher plant is made up of about 90% carbohydrates and 10% proteins. The main carbohydrate constituent is cellulose. Cellulose is an unbranched polymer consisting of D-glucose

molecules, which are con-nected to each other by β-1,4 glycosidic linkages (Fig. 1.3A). Each glucose unit is rotated by 180° from its neighbor, so that very long straight chains can be formed with a chain length of 2,000 to 25,000 glucose residues. About 36 cellulose chains are associated by interchain hydrogen bonds to a crystalline lattice structure known as a microfibril. These crystalline regions are impermeable to water. The microfibrils have an unusually high tensile strength, are very resistant to chemical and biological degradations, and are in fact so stable that they are very difficult to hydrolyze. However, many bacteria and fungi have cellulose-hydrolyzing enzymes (cellulases). These bacteria can be found in the digestive tract of some animals (e.g., ruminants), thus enabling them to digest grass and straw. It is interesting to note that cellulose is the most abundant organic substance on earth, repre-senting about half of the total organically bound carbon.

Hemicelluloses are also important constituents of the cell wall. They are defined as those polysaccharides that can be extracted by alkaline solutions. The name is derived from an initial belief, which later turned out to be incor-rect, that hemicelluloses are precursors of cellulose. Hemicelluloses con-sist of a variety of polysaccharides that contain, in addition to D-glucose, other carbohydrates such as the hexoses D-mannose, D-galactose, D-fucose, and the pentoses D-xylose and L-arabinose. Figure 1.3Bshows xylogly-can as an example of a hemicellulose. The basic structure is a β-1,4-glucan chain to which xylose residues are bound via α-1,6 glycosidic linkages, which in part are linked to D-galactose and D-fucose. In addition to this, L-arabinose residues are linked to the 2’ OH group of the glucose. 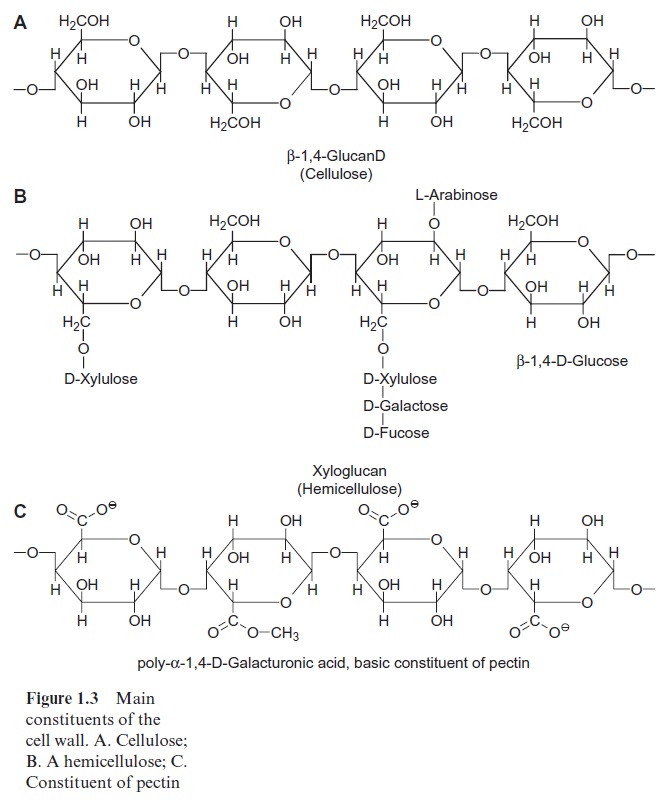 Another major constituent of the cell wall is pectin, a mixture of poly-mers from sugar acids, such as D-galacturonic acid, which are connected by α-1,4 glycosidic links (Fig. 1.3C). Some of the carboxyl groups are ester-ified by methyl groups. The free carboxyl groups of adjacent chains are linked by Ca++ and Mg++ ions (Fig. 1.4). When Mg++ and Ca++ ions are absent, pectin is a soluble compound. The Ca++ /Mg++ salt of pectin forms an amorphous, deformable gel that is able to swell. Pectins function like glue in sticking neighboring cells together, but these cells can be detached again during plant growth. The food industry makes use of this property of pectin when preparing jellies and jams. 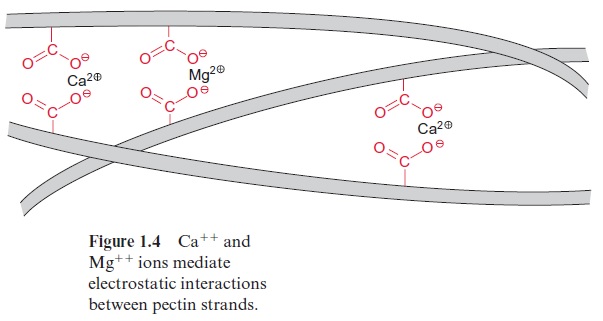 The structural proteins of the cell wall are connected by glycosidic linkages to the branched polysaccharide chains and belong to the class of proteins known asglycoproteins. The carbohydrate portion of these glyco-proteins varies from 50% to over 90%. 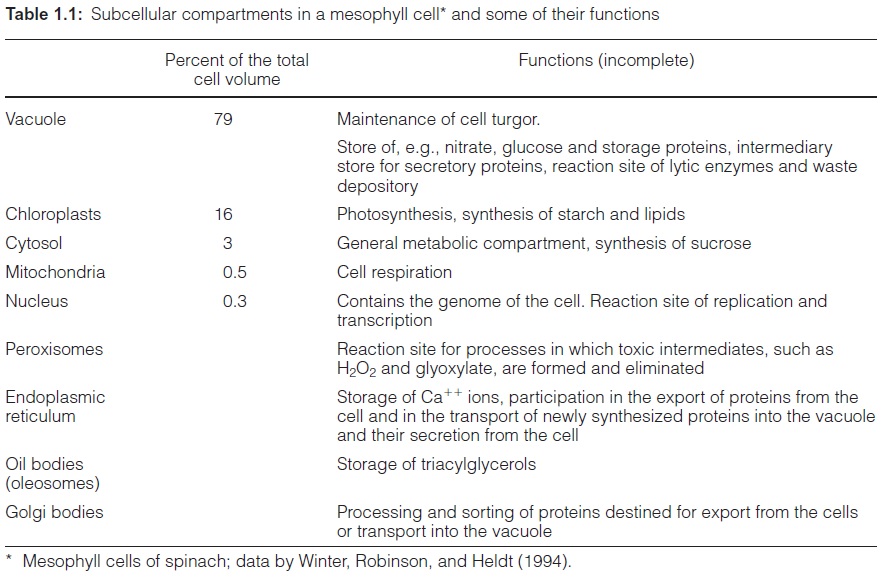 For a plant cell to grow, the very rigid cell wall has to be loosened in a precisely controlled way. This is facilitated by the protein expansin, which occurs in growing tissues of all flowering plants. It probably functions by breaking hydrogen bonds between cellulose microfibrils and cross-link-ing polysaccharides. Cell walls also contain waxes ,cutin, and suberin .

In a monocot plant, the primary wall (i.e., the wall initially formed after the growth of the cell) consists of 20% to 30% cellulose, 25% hemicellulose, 30% pectin, and 5% to 10% glycoprotein. It is permeable for water. Pectin makes the wall elastic and, together with the glycoproteins and the hemi-cellulose, forms the matrix in which the cellulose microfibrils are embed-ded. When the cell has reached its final size and shape, another layer, the secondary wall, which consists mainly of cellulose, is added to the primary wall. The microfibrils in the secondary wall are arranged in a layered struc-ture like plywood (Fig. 1.5). 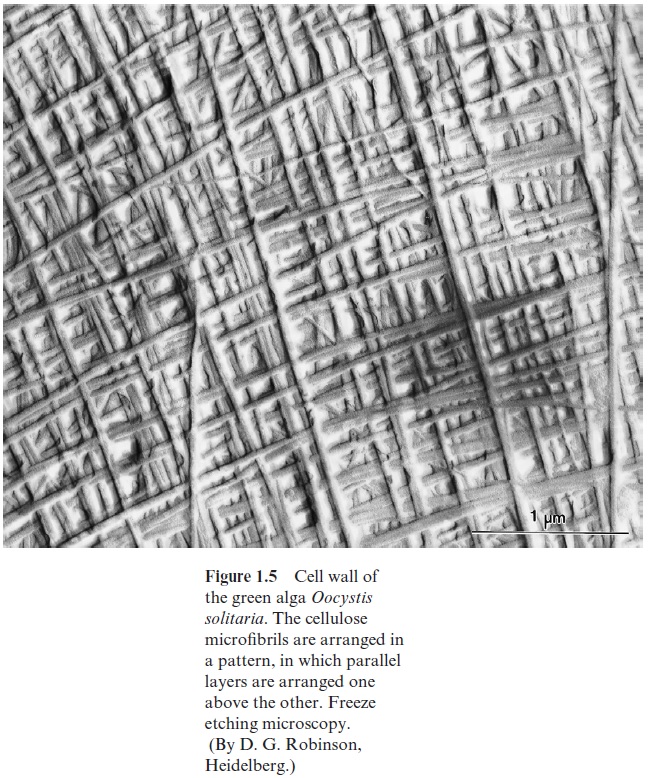 The incorporation of lignin in the secondary wall causes the lignification of plant parts and the corresponding cells die, leaving the dead cells with only a supporting function (e.g., forming the branches and twigs of trees or the stems of herbaceous plants). Lignin is formed by the polymerization of the phenylpropane derivativescumaryl alcohol, coniferyl alcohol, and sinapyl alcohol, resulting in a very solid structure . Dry wood consists of about 30% lignin, 40% cellulose, and 30% hemicellulose. After cellulose, lignin is the most abundant natural compound on earth.

Neighboring cells are normally connected by plasmodesmata thrusting through the cell walls. Plant cells often contain 1,000–10,000 plasmodes-mata. In its basic structure plasmodesmata allow the passage of molecules up to a molecular mass of 800 to 1,200 Dalton, but, by mechanisms to be discussed in the following, plasmodesmata can be widened to allow the pas-sage of much larger molecules. Plasmodesmata connect many plant cells to form a single large metabolic compartment where the metabolites in the cytosol can move between the various cells by diffusion. This continuous compartment formed by different plant cells (Fig. 1.6) is called the symplast. In contrast, the spaces between cells, which are often continuous, are termed the extracellular space or the apoplast (Figs. 1.2, 1.6). 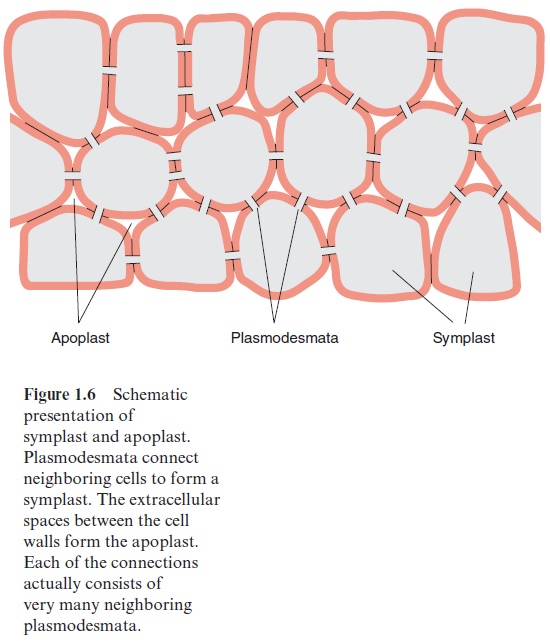 Figure 1.7 shows a schematic presentation of a plasmodesm. The tube like opening through the cell wall is lined by the plasma membrane, which is continuous between the neighboring cells. In the interior of this tube there is another tube-like membrane structure, which is part of the endoplasmatic reticulum (ER) of the neighboring cells. In this way the ER system of the entire symplast represents a continuous compartment. The space between the plasma membrane and the ER membrane forms the diffusion pathway between the cytosol of neighboring cells. There are probably two mechanisms for increasing this opening of the plasmodesmata. A gated pathway widens the plasmodesmata to allow the unspecific passage of mol-ecules with a mass of up to 20,000 Dalton. The details of the regulation of this gated pathway remain to be elucidated. In the selective trafficking the widening is caused by helper proteins, which are able to bind specifi-cally macromolecules such as RNAs in order to guide these through the plasmodesm. This was first observed with virus movement proteins encoded by viruses, which form complexes with virus RNAs to facilitate their pas-sage across the plasmodesm and in this way enable the spreading of the viruses over the entire symplast. By now many of these virus movement proteins have been identified, and it was also observed that plants produce movement proteins that guide macromolecules through plasmodesmata. Apparently this represents a general transport process of which the viruses take advantage. It is presumed that the cell’s own movement proteins, upon the consumption of ATP, facilitate the transfer of macromolecules, such as RNA and proteins, from one cell to the next via the plasmodesmata. In this way transcription factors may be distributed in a regulated mode as signals via the symplast, which might play an important role during defense reac-tions against pathogen infections. 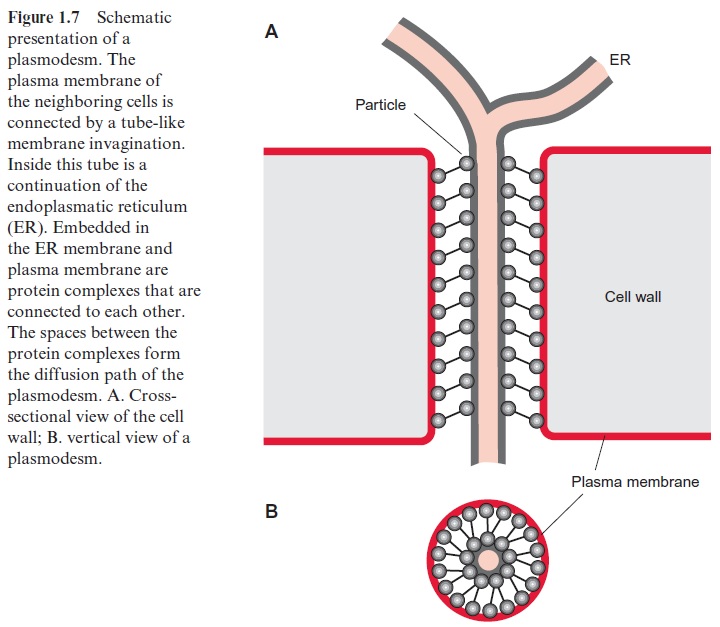 The plant cell wall, which is very rigid and resistant, can be lysed by cellulose and pectin hydrolyzing enzymes obtained from microorgan-isms. When leaf pieces are incubated with these enzymes, plant cells can be obtained without the cell wall. These naked cells are called protoplasts. Protoplasts, however, are stable only in anisotonic medium in which the osmotic pressure corresponds to the osmotic pressure of the cell fluid. In pure water the protoplasts, as they have no cell wall, swell so much that they burst. In appropriate media, the protoplasts of many plants are viable, they can be propagated in cell culture, and they can be stimulated to form a cell wall and even to regenerate a whole new plant.