The chloroplast trioseP-P translocator mentioned previously has a turnover number of 80 s -1 at 25°C, which means that it transports 80 substrate molecules per second.

The chloroplast trioseP-P translocator mentioned previously has a turnover number of 80 s -1 at 25°C, which means that it transports 80 substrate molecules per second. The turnover numbers of other translocators are in the range of 10 to 1,000 s -1. Membranes also contain proteins which form ion chan-nels that transport various ions at least three orders of magnitude faster than translocators (106 to 108 ions per second). They differ from the translocators in having a pore open to both sides at the same time. The flux of ions through the ion channel is so large that it is possible to determine the transport capac-ity of a single channel from the measurement of electrical conductivity. 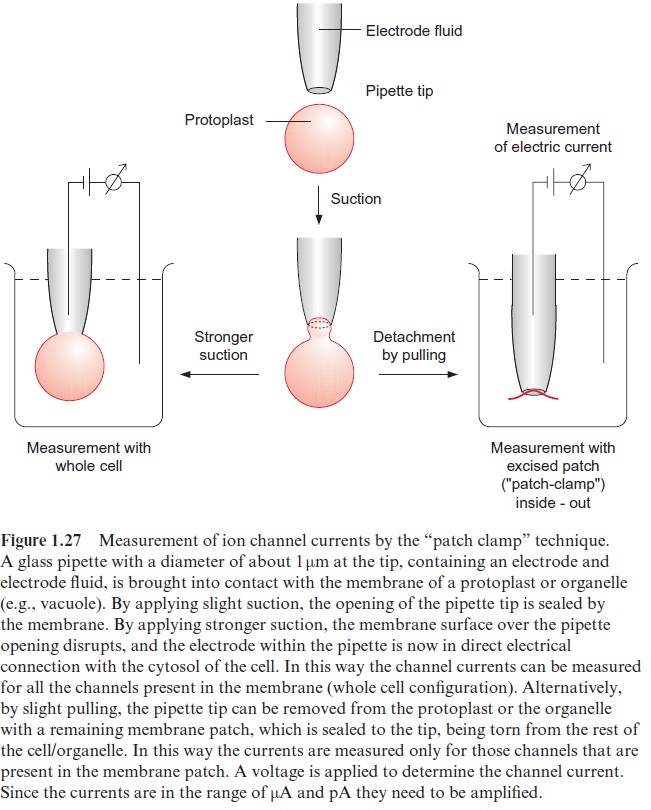 The procedure for such single channel measurements, called the patch clamp technique, was developed by two German scientists, Erwin Neher and Bert Sakmann, who were awarded the Nobel Prize in Medicine and Physiology in 1991 for this research. The set-up for this measurement (Fig. 1.27) consists of a glass pipette that contains an electrode filled with an elec-trolyte fluid. The very thin tip of this pipette (diameter about 1  m) is sealed tightly by a membrane patch. The number of ions transported through this patch per unit time can be determined by measuring the electrical current (usually expressed as conductivity in Siemens (S)). Figure 1.28 shows an example of the measurement of the single channel currents with the plasma membrane of broad bean guard cells. As shown from the recording of the current, the channel opens for various lengths of time and then closes. This principle of stochastic switchingbetween a non-conductive state and a defined conductive state is a typical property of ion channels. In the open state various channels have different conductivities, which can range from between a few pS and several hundred pS. Moreover, various channels have characteristic mean open and close times, which, depending on the channel, can last from a few milliseconds to seconds. The transport capacity of the channel per unit time therefore depends on the conductivity of the opened channel as well as on the mean duration of the open state.

Many ion channels have been characterized that are more or less spe-cific for certain ions. Plants contain highly selective cation channels for H+ , K+ , Na+ and Ca++ and also selective anion channels for Cl- and dicar-boxylates, such as malate. The opening of many ion channels is regulated by the electric membrane potential. This means that membranes have a very important function in the electrical regulation of ion fluxes. Thus, in guard cells  the hyperpolarization of the plasma membrane (>100 mV) opens a channel that allows potassium ions to flow into the cell (K+ inward channel), whereas depolarization opens another channel by which potassium ions can leave the cell (K+ outward channel). In addition, the opening of many ion channels is controlled by ligands such as Ca++ ions, protons, or by phosphorylation of the channel protein. This enables regulation of the channel activity by metabolic processes and by messenger substances .

Up to now the amino acid sequences of many channel proteins have been determined. It emerged that certain channels (e.g., those for K+ ions in bacteria, animals, and plants) are very similar. Roderick MacKinnon and coworkers from the Rockefeller University in New York resolved the three-dimensional structure of the K+ channel for the bacterium Streptomyces lividans using X-ray structure analysis . These pioneering results, for which Roderick MacKinnon was awarded the Nobel Prize in Chemistry in 2003, have made it possible to recognize for the first time the molecular function of an ion channel. It has long been known that the chan-nel protein is built from two identical subunits, each of which has two trans- membrane helices connected by a sequence of about 30 amino acids (loop) (Fig. 1.29A). This loop is responsible for the ion selectivity of the channel. Structure analysis showed that a K+ channel is built of four of these subu-nits (Fig. 1.29B, C). One helix of each subunit (the inner one) lines the chan-nel while the other (outer) helix is directed towards the lipid membrane. The pore’s interior consists of a channel filled with water, which is separated from the outside by a selectivity filter. This filter is formed from the loops of the four subunits. The channel has such a small pore that the K+ ions first have to strip off their hydrate coat before they can pass through. In order to compensate for the large amount of energy required to dehydrate the K+ ions, the pore is lined with a circular array of oxygen atoms that act as a “water substitute” and form a complex with the K+ ions. The pore is also negatively charged to bind the cations. The new K+ ions that enter the pore push those ions that are already bound through the pore to the other side of the filter. Na+ ions are too small to be complexed in the pore’s selection filter; they are unable to strip off their hydrate coat and therefore their pas-sage through the filter is blocked. This explains the K+ channel’s ion selec-tivity. The aforementioned loops between the transmembrane helices acting as a selectivity filter appear to be a common characteristic of K+ ion chan-nels in microorganisms, animals and plants. Studies with K+ channels from plants revealed that a decisive factor in the K+ selectivity is the presence of glycine residues in the four loops of the selectivity filter. Analogous results were obtained from the analysis of the three-dimensional structure of chlo-ride channels from the bacteria Salmonella and E. coli(belonging to a large family of anion channels from prokaryotic and eukaryotic organisms). These channels, formed from transmembrane helices, also contain in their interior loops, which function as selectivity filters by electrostatic interac-tion and coordinated binding of the chloride anion. It appears now that the features the K+ channel of Streptomyces reveals a general mechanistic prin-ciple by which specific ion channels function.

There are similarities between the basic structure of ion channels and translocators. Translocators, such as the mitochondrial aspartate-gluta-mate translocator, can be converted by the action of chemical agents (e.g., organic mercury compounds reacting with -SH groups) into a channel, which is simultaneously open to both sides, and has an ion conductivity similar to the ion channels discussed above. The functional differences between translocators and ion channels can be explained by differences in the outfit of the pore by peptide chains. In metabolite translocators the substrate binding site is at a given time only accessible from one side, and the transport involves a conformational change configurating the channel as a gate, whereas in open ion channels the aqueous pore is simultaneously open to both sides.