Types of Mutations That Generate Oncogenes

The mutations that create oncogenes are dominant and result in increased cell division. This is because oncogenic mutations do not result from loss of activity but from increased activity of the product encoded by the oncogene.

TYPES OF MUTATIONS THAT GENERATE ONCOGENES 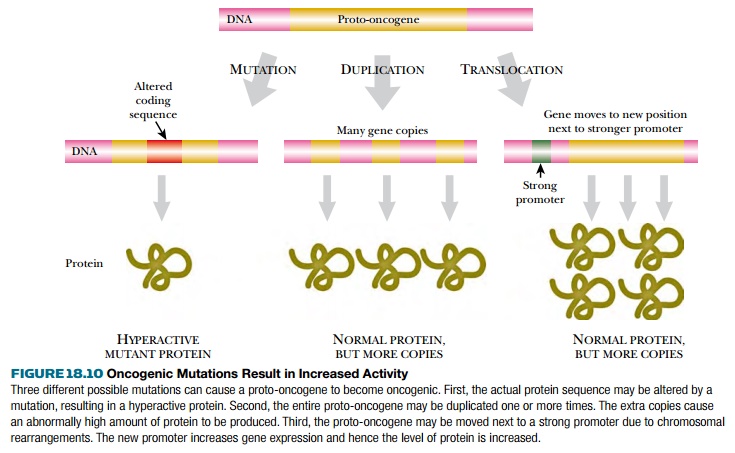 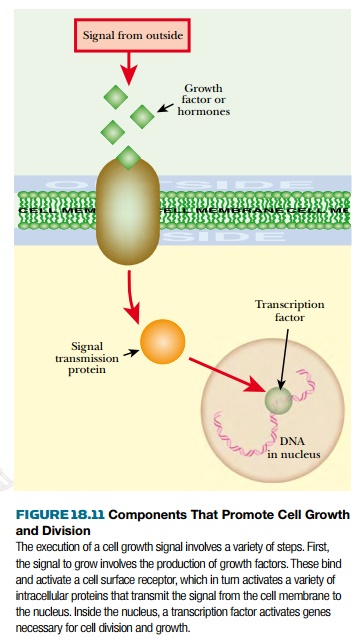 The pathway for activating cell growth and division has several stages, and proto-oncogenes encode the proteins taking part in this scheme (Fig. 18.11). Not surprisingly, mutations that result in hyperactivation of any of these components can turn proto-oncogenes into oncogenes. The major components involved in cell division are:

1.           Growth factors: These are proteins or other chemical messengers circulating in the blood that carry signals for promoting growth to the cell surface.

2.            Cell surface receptors: These proteins are found in the cell membrane where they receive chemical messages from outside the cell. They pass the signal on, often by activating other proteins, such as G-proteins.

3.            Signal transduction proteins: These pass on the signal from outside the cell to proteins or genes involved in cell division. Many of these are protein kinases that activate or inactivate other proteins by addition of a phosphate group.

4.            Transcription factors: These proteins bind to and switch on genes in the cell nucleus. This results in the synthesis of new proteins, as opposed to the activation of those already present.