Cancer Is Genetic in Origin

CANCER IS GENETIC IN ORIGIN

Both inherited diseases and cancers are genetic in origin. Inherited diseases are genetic defects that are passed on from one individual to another via the germline. Mutations must occur in the germline cells, which give rise to the eggs and sperm, to be passed on to the descendants of a multicellular organism. In contrast, each occurrence of cancer is limited to a single multicellular organism and is not passed on to the next generation. If a mutation does occur in somatic cells—those making up the rest of the body—a variety of possibilities may result (Fig. 18.1).

A mutation that occurs early on in embryonic development may be highly detrimental, because each cell of the embryo gives rise to many cells during development. If the single precursor cell for a major organ or tissue suffers a serious mutation, the results may be serious or fatal. Most somatic mutations occurring later in development will affect only one or a few cells and willbe of little major significance. 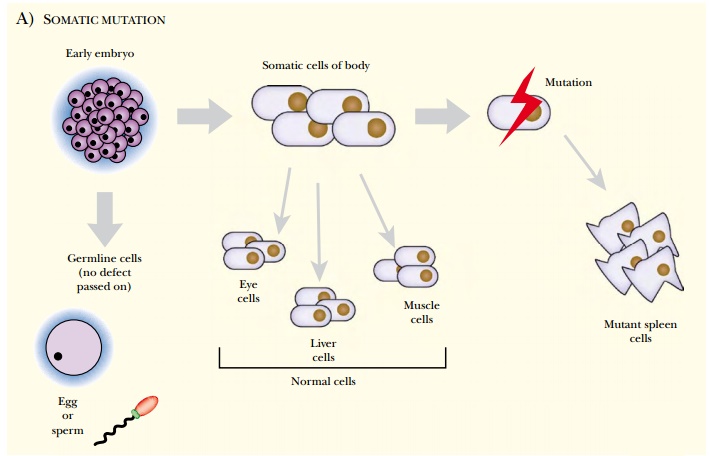 Some somatic mutations occurring after the organism has reached maturity are still dangerous. Cancers are the result of somatic mutations that damage the regulatory system controlling cell growth and division. Cancer often starts with a single cell starting to grow and divide again, long after it is supposed to have ceased (Fig. 18.1). Cancers develop in several stages and require multiple mutations. First, a cell’s normal control of cell division is lost. Second, the abnormal (mutant) cell divides to form a microtumor. Many microtumors are formed throughout our bodies. Most of these are destroyed by the immune system, whereas others lie quiescent for many months to years.

Small microtumors of about a million cells lie dormant because they have no way of obtaining nutrients. But if further mutations occur, the tumor may begin to acquire blood vessels. The mutant cancer cells emit signaling molecules to the surrounding tissues, attracting vascular endothelial cells to organize into blood vessels, a process called angiogenesis. Once the microtumor gets its own blood supply, the tumor can continue to grow into a large mass. If this stays in one place, it is known as a benign tumor and can often be cut out by a surgeon, resulting in complete recovery. Finally, as a result of further mutations, a cancer may gain the ability to invade other tissues and form secondary tumors and is then said to be malignant. Cancers that have spread are much more difficult to cure.