Although retroviruses that cause cancer in chickens and mice were important in the discovery of oncogenes, few human cancers are due to retroviruses.

Although retroviruses that cause cancer in chickens and mice were important in the discovery of oncogenes, few human cancers are due to retroviruses. The most famous human retrovirus is AIDS. Although some AIDS patients die of cancers, the AIDS virus does not cause cancer directly. What it does is cripple the immune system that would otherwise kill off most cancer cells before they get too far out of control. Kaposi’s sarcoma, often seen in AIDS patients, is caused by secondary infection with another virus, human herpesvirus 8 (HHV8) .

The first genuine cancer-causing retrovirus to be discovered was Rous sarcoma virus (RSV) . Long ago, the ancestor of this virus picked up a copy of the chicken src oncogene . The genome inside a retrovirus particle is RNA. When RSV infects chickens the RNA is converted into a DNA copy by reverse transcriptase. The viral DNA is then integrated into the host cell DNA along with the src oncogene that it carries. Expression of this copy of the src oncogene causes muscle tumors, known as sarcomas.

Only about 15% of human cancers are due to viruses, and most of these are due to DNA viruses ( papillomaviruses and herpesviruses ). The major human cancer-causing viruses are listed in Table 18.1 . Simian virus 40 (SV40) , which causes cancer in monkeys, has been studied most. Such DNA tumor viruses act by blocking the cell’s tumor-suppressor genes. Firstthe DNA tumor virus integrates its DNA into the host cell’s chromosome. Second, it makes a virus protein that binds to the cell’s Rb and p53 proteins ( Fig. 18.23 ). This activates cell division and may lead to a tumor. 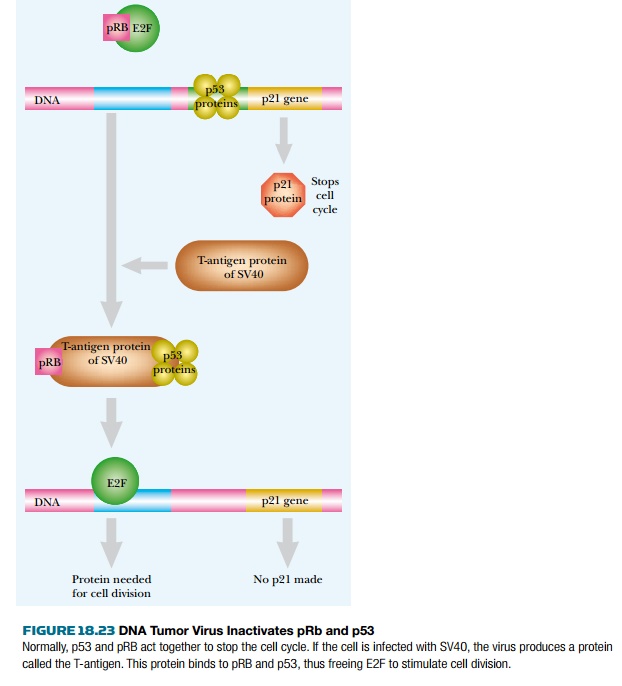