Best known of the human anti-oncogenes is the infamous p53 gene , found on the short arm of chromosome 17.

Best known of the human anti-oncogenes is the infamous p53 gene , found on the short arm of chromosome 17. The p53 protein (also known as TP53) is a DNA binding protein that, together with proteins p16 and p21, acts as an emergency braking system for the cell cycle. The p53 gene is involved in a very large number of diverse cancers because its behavior differs from that of a standard anti-oncogene. Mutant alleles of typical antioncogenes are recessive and a single mutation does not allow cell division. In contrast, a single defective p53 allele does show such effects, even in the presence of a second, normal copy of the gene. Thus p53 mutations are dominant negatives. Well over half of all human cancers are defective in p53. 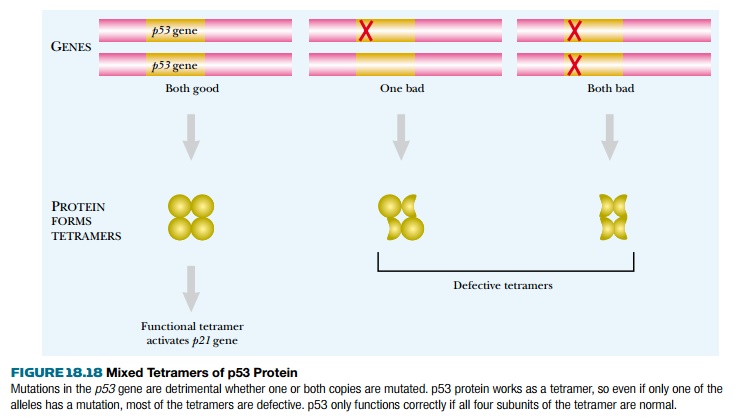 The reason for this aberrant behavior is the formation of mixed tetramers. The protein encoded by the p53 gene assembles into groups of four ( Fig. 18.18 ). When a cell has one good copy of the p53 gene and one bad copy, it will produce a mixture of functional and defective p53 protein subunits. These will assemble into mixed tetramers, and even if a tetramer contains some good subunits, a single defective subunit will cripple the whole assembly. The likelihood of assembling a wholly good tetramer from such a 50:50 mixture of functional and defective subunits is ½ × ½ × ½ × ½ = ¹⁄16. Thus, only one-sixteenth of the p53 protein assemblies will function correctly even though half of the individual protein subunits are normal.

If a cell’s DNA is damaged in any way, the normal p53 protein activates the gene for p21. The p21 protein then blocks the action of all of the cyclins and freezes the cell wherever it is in the cell cycle until the damage can be repaired ( Fig. 18.19 ). The p16 protein acts similarly, but just blocks cyclin E. It stops division at the critical point just before the cell enters the Sphase in which the DNA is replicated. 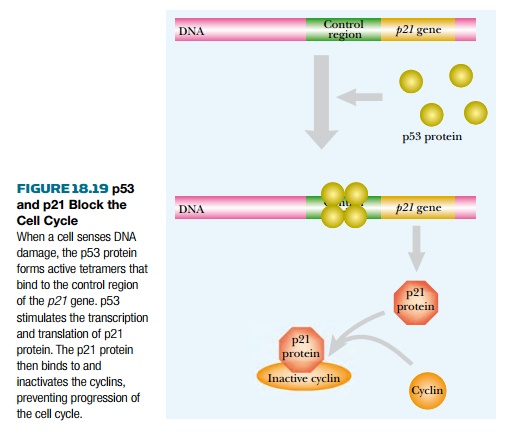 The p53 protein is not necessary for normal cell division. Mice with both copies of the p53 gene knockeout grow normally to start with. However, they all die of cancer after 3 or 4 months. The role of p53 is to shut down cell division in DNA emergencies, such as ultraviolet radiation damage. The p53 pathway also responds to a shortage of nucleotides or a lack of oxygen. In severe cases, p53 may initiate programmed cell death, via Bax protein rather than merely arresting cell division ( Fig. 18.20 ). The p53 protein is inactive when first synthesized and cannot bind to its recognition sequence in the upstream region of those genes it controls. It maybe activated to form the tetramer by binding to single-stranded DNA or by phosphorylation. 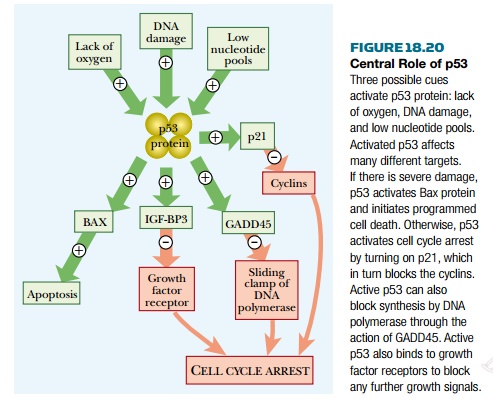