The Myc Oncogene-Overproduction of Protein

Some oncogenes are due to mutations that alter the structure of a protein such as Ras.

THE MYC ONCOGENE—OVERPRODUCTION OF PROTEIN

Some oncogenes are due to mutations that alter the structure of a protein such as Ras. Instead of a hyperactive mutant protein, many other oncogenes suffer changes that vastly increase the amount of the protein formed, although the protein itself is not changed.

A well-known example is the myconcogene, which encodes a transcription factor involved in switching on several other genes involved in cell division. A Myc protein overdose can occur in two ways. Some myc-dependent cancers result from chromosomal changes in which the myc gene is duplicated many times. Instead of the normal two copies, 50 to 100 copies may occur because of mistaken duplication of the segment of DNA carrying the myc gene (Fig. 18.14). The Myc protein will then be overproduced by 50- to 100-fold, too. 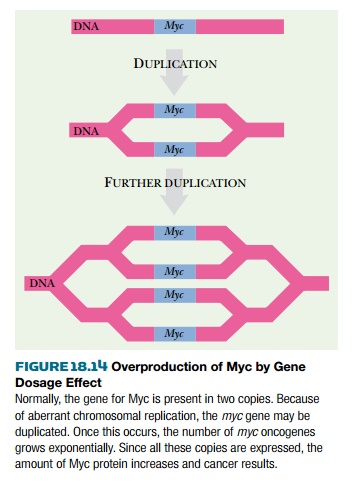 Alternatively, the number of copies of the myc gene may remain unchanged, but their regulation may be altered. In Burkitt’s lymphoma, a rare chromosomal translocation swaps segments of two unrelated chromosomes. This separates the myc structural gene from its own regulatory region and fuses it to the highly active promoter of another gene (Fig. 18.15). The Myc protein is now produced continuously in substantial amounts instead of being strictly regulated as before.

Mutations in myc are among the most common in mammalian cancers. Most types of human cancers show overexpression of Myc, although the frequency differs considerably from one type of tumor to another. In particular, mutations in myc tend to occur during the later progression of many cancers, including those of lung, breast, and ovary. 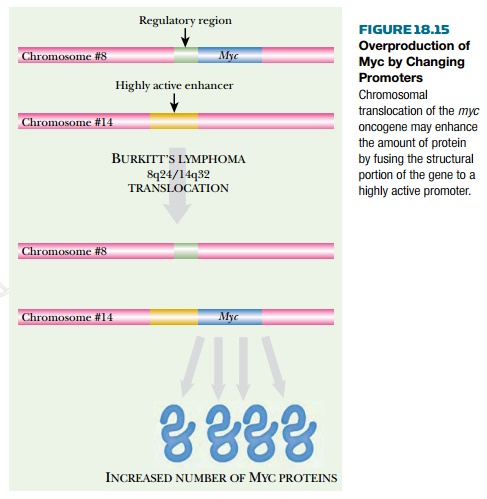