It is thought that 5% to 10% of cancers may be largely due to inherited defects. Many of the genes involved in this are poorly understood, but they may be divided into three general categories.

It is thought that 5% to 10% of cancers may be largely due to inherited defects. Many of the genes involved in this are poorly understood, but they may be divided into three general categories.

First, as we have already discussed, it is possible to inherit one defective copy of an anti-oncogene. In this case every somatic cell starts life with one faulty copy and only a single somatic mutation is needed to completely inactivate the pair of anti-oncogenes. (Note: Inheriting two defective copies of an anti-oncogene is normally lethal. Artificially engineered mice that are doubly negative for such genes generally die before birth.)

Secondly, mutations in certain special genes affect the rate at which further mutations occur during cell division. Such genes are known as mutator genes . These include genes involved in DNA synthesis, such as the genes encoding DNA polymerase. Some mutator genes are more subtle and are involved in DNA repair. These have been analyzed in detail in bacteria, although less is known for humans. Nonetheless, it appears that certain inherited forms of colon cancer are due to defects in genes involved in mismatch repair.

This, in turn, increases the rate of mutation in all other genes including the

Inherited breast cancer falls into this category. Inheriting a single defective copy of either the BRCA1 or BRCA2 genes (breast cancer A genes) predisposes women to breast cancer. About 0.5% of U.S. women carry mutations in BRCA1 , which also predisposes to cancer of the ovary. As with other tumor-suppressorgenes, the second copy must mutate during division of somatic cells for a cancer to arise. Individuals with two defective BRCA alleles die as embryos. Both BRCA1 and BRCA2 proteins are involved in DNA repair. Both bind to RAD51, which takes part in mending double-stranded DNA breaks ( Fig. 18.22 ). In addition BRCA1 has a dual role as a transcriptional regulator of other components needed for DNA repair. 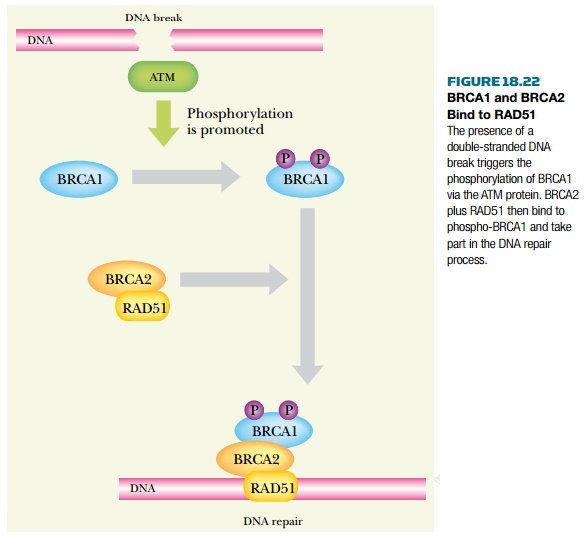 Finally, there are indirect effects on cancer frequency due to genetic differences between races or within populations. For example, some skin cancers result from mutations caused by ultraviolet radiation from the sun. White people, especially those exposed to high levels of sunshine in the tropics or Australia, develop skin cancer much more often than darker-skinned people. The reason is obvious: the more pigment, the less UV radiation penetrating to your DNA.