Oncogenes were first discovered on cancer-causing viruses, but they are found in all normal cells as well.

Oncogenes were first discovered on cancer-causing viruses, but they are found in all normal cells as well. The original, unmutated wild-type allele of an oncogene is sometimes called the proto-oncogene. The wild-type proto-oncogene promotes growth and division of the cell.During development of a multicellular organism, cell division must be closely controlled. Once an organ or tissue has reached its correct size, it should stop growing. In other words, its cells should stop dividing. Clearly, mutations in genes that control cell division are potentially very dangerous. These mutant versions are the cancer-causing oncogenes (Fig. 18.6).

The genomes of cancer-causing viruses also contain oncogenes. However, these oncogenes were originally derived from those of the host cells that the viruses infect. Certain types of viruses occasionally pick up cellular DNA and incorporate it into the viral genome. Sometimes they pick up an oncogene and the result is a cancer-causing or oncogenic virus (Fig. 18.7). The virus-borne version of an oncogene is sometimes written v-onc to distinguish it from the cellular version, c-onc. Although quite a few cancer viruses are known, most human cancers are not due to viruses, but are due to new mutations of cellular proto-oncogenes to the oncogene form. 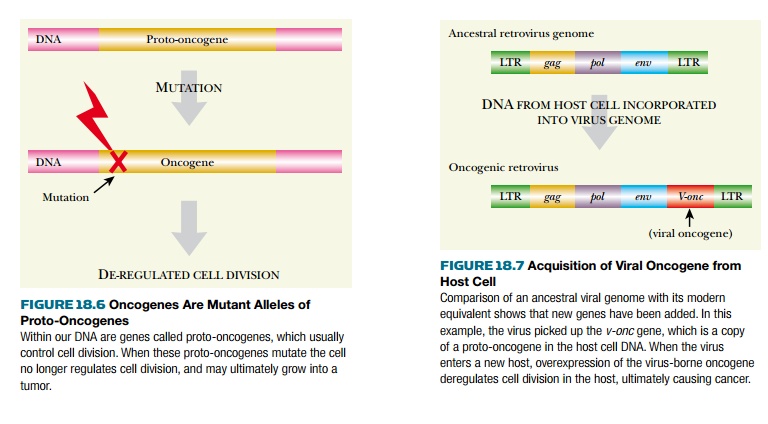