To understand further how cancer occurs, we must consider the process of normal celldivision. The eukaryotic cell cycle has four stages

To understand further how cancer occurs, we must consider the process of normal celldivision. The eukaryotic cell cycle has four stages (see Chapter 4 and Fig. 4.9):

2 . S (synthesis) phase —the DNA and chromosomes are duplicated

3 . G2 phase —the cell grows and prepares to divide

4 . M (mitosis) phase —the cell and its nucleus divide.

In addition, cells may exit from the growth and division cycle into the G0phase. Most nondividing cells are in G0. Many of these will differentiate and rarely divide again, under normal circumstances (Fig. 18.2). 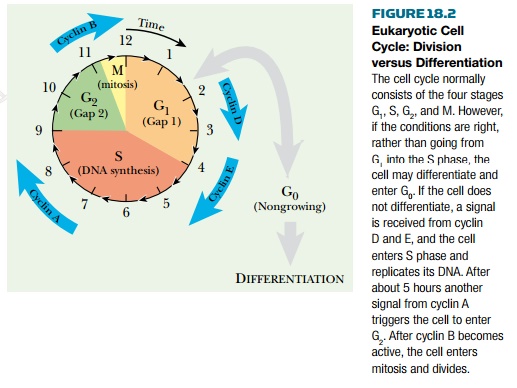 To move from one stage to another requires the permission of proteins called cyclins , one for each major stage. The cyclins act as security checkpoints. They monitor the environment and also check to make sure that the previous stage of the cell cycle has been finished properly before moving on. The cyclins work in conjunction with the cyclin-dependent kinases (CDKs) . When the cyclin for a particular step in the cell cycle senses that conditions are appropriate, it binds to the appropriate CDK ( Fig. 18.3 ). This activates the CDK, which then adds phosphate groups to a series of other proteins. These are the enzymes and structural proteins that actually carry out the process of cell division. These proteins are on standby until the added phosphate group activates them. Several antioncogenes act by blocking the action of the cyclins (see later discussion).

Perhaps the most critical checkpoint is the transition between the G 1 and S phases, which is controlled by two transcription factors, E2F and p53 together with the pRB protein (product of the retinoblastoma gene, an anti-oncogene). E2F promotes the expression of severalgenes involved in DNA replication. It also increases synthesis of the cyclins E and A that control the cell cycle beyond G 1 ( Fig. 18.4 ). Binding to pRB inactivates E2F until the cell receives a signal from the outside. External growth factors cause synthesis of cyclin D. This activates CDK4, which in turn phosphorylates pRB. Phosphorylated pRB releases E2F, which is then free to activate its target genes. The negative side of this regulation system is dominated by p53 protein (see later discussion).