The cells responsible for both innate immunity and acquired immunity are the leukocytes.

The cells responsible for both innate immunity and acquired immunity are the leukocytes (Greek leukos, white and kytos cell). The average adult has approximately 7400 leukocytes (white blood cells) per cubic millimeter of blood (Table 13.2). The average value shifts substantially during an immune response. In defending the host against pathogenic microorganisms, leukocytes cooperate with each other first to recognize the pathogen as an invader and then to destroy it. The different types of leukocytes are now briefly described. 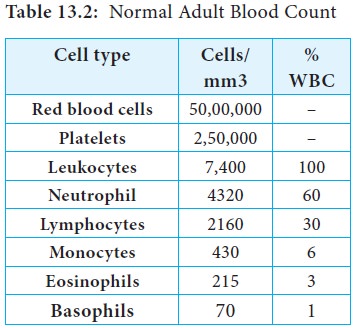 Granulocytes have irregularly shaped nuclei with two or five lobes. Their cytoplasmhas granules that contain reactive substances that kill microorganisms and enhance inflammation. Three types of granulocytes exist: basophils, eosinophils, and neutrophils. Because of the many lobed (3-5) nuclei, neutrophils are also called polymorphonuclear neutrophils or PMNS (Figure 13.11). 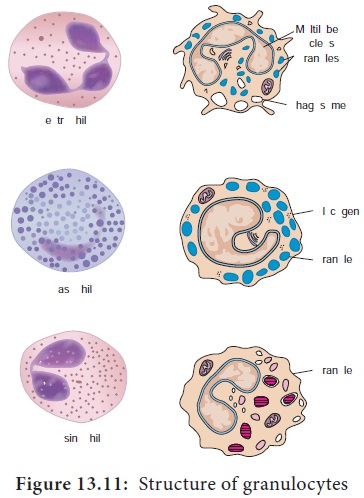 Basophils are found in blood. Basophils have irregularly shaped nuclei with two lobes and granules that stain bluish black with basic dyes. Basophils are non phagocytic cells that release specific compounds from their cytoplasmic granules which include histamine, prostaglandins, serotonin, and leukotriens. Because these compounds affect vascular permeability they are termed vasoactive mediators. Vasoactive mediators play a major role in certain allergic responses such as eczema, hay fever and asthma.

Eosinophils have a two lobed nucleus connected by a slender thread of chromatin and granules that stain with acidic dyes. Unlike basophils, eosinophils, migrate from the blood stream into tissue spaces, especially mucous membranes. They are important in the defense against protozoan and helminth parasites, mainly by releasing cationic peptides and reactive oxygen intermediates, into the extracellular fluid. These molecules damage the parasite plasma membrane, killing it. Eosinophils also play a role in allergic reactions.

Neutrophils have three to five lobed nucleus. Like macrophages, neutrophils have receptors for antibodies and complement proteins and are highly phagocytic. However, unlike macrophages, neutrophils do not reside in healthy tissue but circulate in blood so they can rapidly migrate to the site of tissue damage and infection, where they become the principle phagocytic and microbicidal cells.

Mast cells are bone marrow derived cells that differentiate in the blood and connective tissue. Although they contain granules with histamine and other pharmacologically active substances similar to those in basophils, they arise from a different cellular lineage. Mast cells, along with basophils, are important in the development of allergies and hypersensitivities.

Monocytes are mononuclear leukocytes. They are produced in the bone marrow and enter the blood, circulate for about eight hours, enlarge, migrate to the tissues and mature into macrophages or dendritic cells (Figure 13.12 a).

Macrophages are derived from monocytes and are classified as mononuclear phagocytic leukocytes. However, they are larger than monocytes, contain more organelles that are critical for phagocytosis and have a plasma membrane with microvilli. Macrophages have receptors to recognize common components of pathogens. These receptors include mannose and fructose receptors and a special class of molecules called toll like receptors. Toll like receptors bind lipopolysaccharide (LPS), peptidoglycan, fungal cell wall component called zymosan, viral nucleic acids and foreign DNA. These microbial molecules are examples of pathogen associated molecular patterns (PAMPs) (Figure 13.12 c). 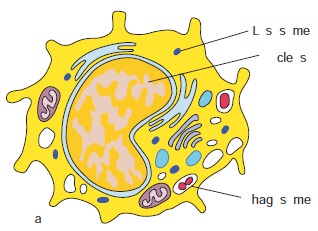 PAMPs enable macrophages to distinguish between potentially harmful microbes and other host molecules. After the pathogen is recognized, the macrophages’, pattern recognition receptors (Example: Toll like receptors) bind the pathogen and phagocytose it. Macrophages also have receptors for antibodies and complement proteins. Both antibody and complement proteins can coat microorganisms and enhance their phagocytosis. This enhancement is termed opsonization. Macrophages spread throughout the body and take up residence in specific tissues. Macrophages serve different functions in different tissues and are named according to their tissue location.

Alveolar macrophages in the lung

Kupffer cells in the liver

Mesangial cells in the kidney

Microglial cells in the brain

Dendritic cells are not a single cell type. They are a heterogeneous group of cells so named because of their Dendron (neuron) like appendages (Figure 13.12d). They arise from various hematopoietic cell lineages. Most dendritic cells are tissue bound, where they play an important role in bridging innate immunity and acquired immunity.

Dendritic cells can be classified by their location:

·        Langerhans cells found in the skin and mucus membranes

·        Circulating dendritic cells in the blood and lymph.

Dendritic cells are similar to macrophages in their ability to recognize specific PAMPs on microorganisms. They also posses pattern recognition receptors (PRRs) to bind and phagocytose the pathogen.

Lymphocytes are the major cells of the specific immunity. Lymphocytes can be divided into three populations: T cells, B cells, and NK (natural killer) cells. Clusters of differentiation are group of monoclonal antibodies that identify the same cell surface molecule. The cell surface molecule is designated CD (cluster of differentiation followed by a number (CD1, CD2).

B lymphocytes mature within the bone marrow. When they leave bone marrow, each expresses a unique antigen binding receptor on its membrane. The B cell receptor is a membrane bound antibody molecule (Figure 13.13a). When a naive B cell, first encounters the antigen that matches its membrane bound antibody, the binding of the antigen to the antibody causes the cell to divide rapidly. Its progeny differentiate into memory B cells and effector B cells called plasma cells Memory B cells have a longer life span than native cells. 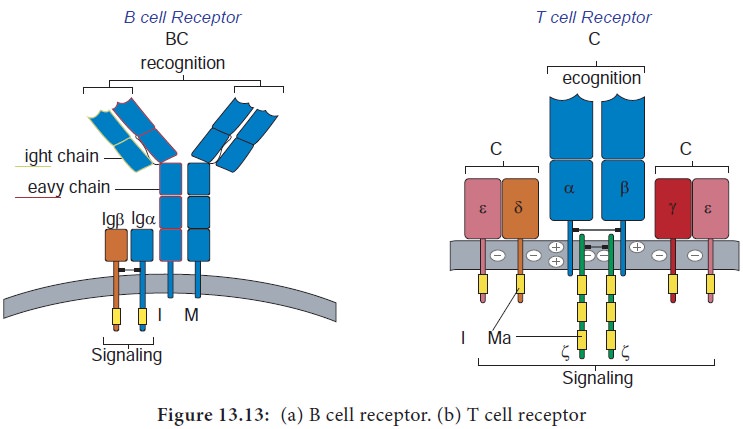 T lymphocytes also arise in the bone marrow. T cells then migrate to the thymus to mature. During its maturation within thymus, the T cells express a unique antigen binding molecule called the T cell receptor (Figure 13.13b) on its membrane. Unlike membrane bound antibodies on B cells, which can recognize antigen alone, T cell receptor can recognize only antigen that is bound to MHC molecules. There are two major types of MHC molecules.

After a TH cell recognizes and interacts with an antigen-MHC class II molecule complex, the cell is activated. It becomes an effector cell that secretes cytokines. The secreted cytokines activate B cells, TC cells, macrophages and various other cells that participate in the immune response.

Under the influence of TH derived cytokines, a TC cell that recognizes an antigen-MHC class I molecule complex proliferates and differentiates into a cytotoxic T lymphocyte (CTL). Cells that display foreign antigen complexed with a class I MHC molecule are called altered self cells. CTL destroy virus infected cells and tumor cells.

NK cells are a small population of large, non phagocytic granular lymphocytes that play an important role in innate immunity. The major NK cell function is to destroy cancer cells and cells infected with microorganisms. They recognize their targets in one of two ways. They can bind to antibodies that coat infected or cancer cells. Thus the antibody bridges the two cell types. This process is called antibody dependent cell mediated cytotoxicity (ADCC) (Figure 13.15) The second way that NK cells recognize infected cells and cancer cells relies on the presence of specialized proteins on the surface of all nucleated host cells known as class II MHC molecules. If a hosts cell loses this MHC protein, as when some viruses or cancers overtake the cell, the NK cells kill it by releasing pore forming proteins and cytotoxic enzymes called granzymes (Figure13.16). 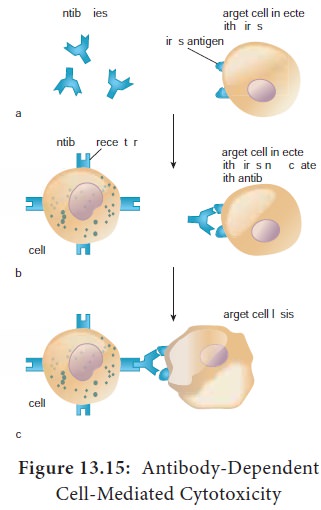 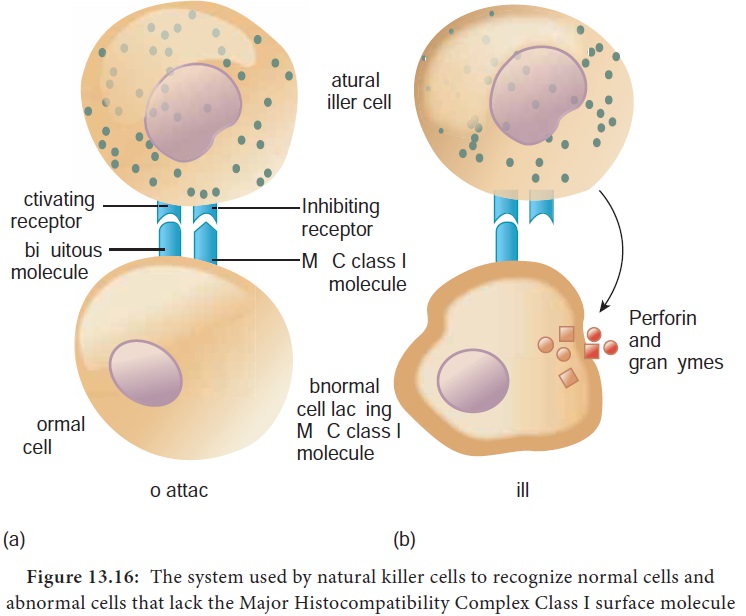