Antibodies are glycoproteins present in serum gamma globulins produced by B-lymphocytes (B cells) or Plasma cells in response to exposure to antigen.

The first real chemical information regarding the structure of antibodies was provided by Tiselius and Kabat in the early 1940s. They demonstrated that the gamma globulin fraction of serum proteins that migrated most slowly in electrophoresis contained most of the serum antibodies. This section deals with the structural and biological properties of antibodies (immunoglobulins).

Antibodies are glycoproteins present in serum gamma globulins produced by B-lymphocytes (B cells) or Plasma cells in response to exposure to antigen. Antibodies are also known as immunoglobulins. They react specially with that antigen in vivo or in vitro and are hence a part of the adaptive immune response specifically, humoral immunity. 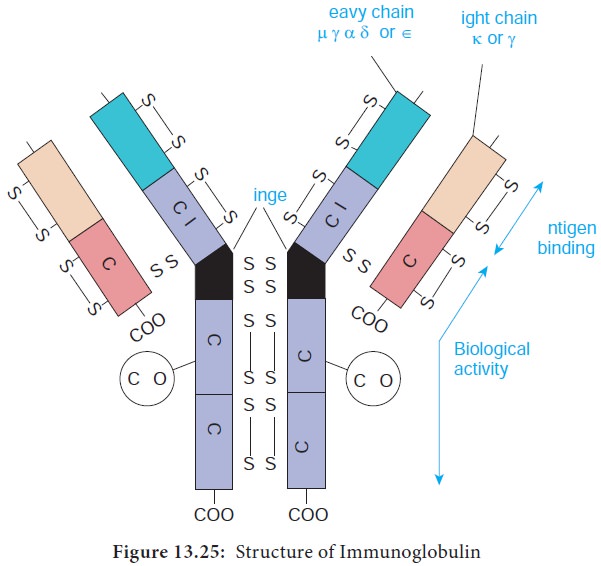 Light Chains have a molecular weight of approximately 25000 Da and are composed of about 220 amino acids. Light chains are common to all immunoglobulin classes and are of two types – kappa (κ) or lambda(λ) - based on their structural differences. A given immunoglobulin molecule may contain either identical κ or λ chains but never both.

Disulfide bonds hold together the four polypeptide chains in normal immunoglobulin molecules and are of two types namely interchain bonds and intrachain bonds.

b. Intra chain bonds are stronger than interchain bonds and occur within the individual chain type, with the number of bonds varying depending on the type (light chains have two, human γ, α and δ heavy chains have four and human μ and ε heavy chains have five). The distribution of intrachain disulfide bonds forms the basis for division of each immunoglobulin into domains.

Proteolytic (peptide bond -splitting) enzymes such as papain and pepsin are used to degrade immunoglobulin molecules into definable fragments to facilitate study of their structure.

i. Treatment of the monomeric basic unit with the enzyme papain splits it into two Fab fragments (Fragment-antigen binding) and one Fc fragment. These Fab fragments can bind but cannot precipitate the antigen; therefore, they are monovalent, possessing only one combining site each.

ii. Treatment of the immunoglobulin molecule with pepsin results in digestion of most of the Fc fragment, leaving one large fragment that consists of two Fab fragments joined by covalent bonds, termed the F(ab’)2 fragment. The F(ab’)2 fragments has two antigen combining sites. Therefore it is bivalent, possessing the ability to bind and precipitate an antigen (Figure 13.26). 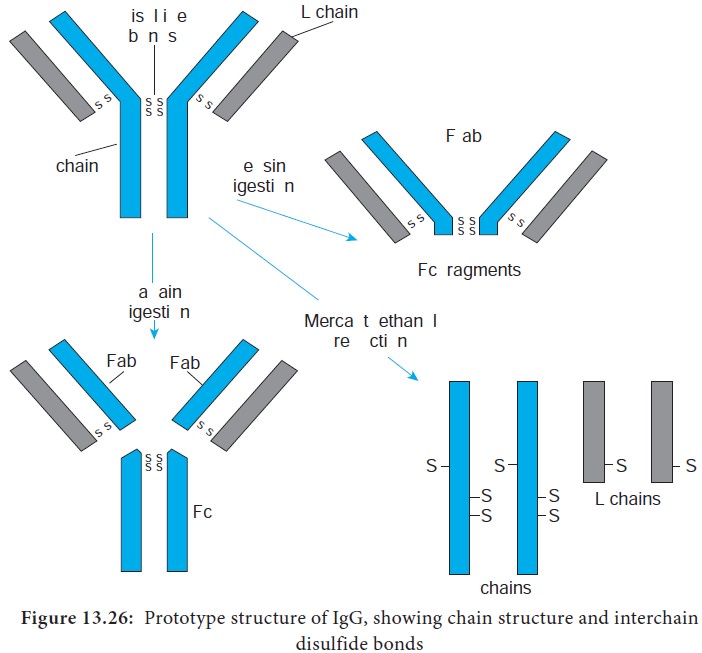 Hinge region is the portion of heavy chain between the CH1 and CH2 domains. It is highly flexible and allows for movement of the Fab arms in relation to each other. The S values (sedimentation coefficient that is expressed in Svedberg units(s)) of immunoglobulins range from 7S- 19S.

There are three major effector functions that enable antibodies to remove antigens and kill pathogens. Opsonization promotes antigen phagocytosis by macrophages and neutrophils. Complement activation by IgM and IgG can activate a pathway that leads to the generation of a collection of proteins that can perforate cell membranes. Antibody-dependent cell-mediated cytotoxicity (ADCC) can cause NK cell mediated death of target cells when antibody bound to the target cells associates with Fc receptors of natural killer (NK) cells.

Each  immunoglobulin  class  differs  in its  general  properties,  distribution  in the  body  and  interaction  with  other components  of  the  host  defensive systems.

·        It is present in blood plasma and tissue fluids. It has a monomeric structure.

·        IgG class acts against bacteria and viruses by opsonizing the invaders and neutralizing toxins and viruses.

·        IgG molecules are capable of fixing complement, except for IgG4.

·        It is the major antibody in the secondary immune response and it has half life of 23 days.

·        IgG is the only immunoglobulin molecule able to cross the placenta and provides natural immunity in utero and to the neonate at birth.

·        In humans, over 80% of serum IgA exists in a monomeric form and the remaining existing as polymers in the form of dimers, trimers or tetramers. In polymeric IgA, the monomeric units are linked by disulphide bonds and joining (J) chain.

·        Serum IgA fixes complement via the alternative pathway. It has a half life of 5 days.

1.     SecretoryIgA is the primary immunoglobulin of mucosal associated lymphoid tissue (MALT). It is also found in saliva, tears, and breast milk.

2.     It consists of two monomeric units plus J chain and secretory component (Figure 13.29).

3.     The dominant subclass of sIgA is sIgA2 which is unique for its absence of a covalent bond between the light and heavy chains. In this subclass, light chains are linked by disulphide bonds.

5.     The sIgA molecules protect mucosal surfaces by reacting with the surface of potential pathogens and interfering with their adherence and colonization. It also plays a role in the alternative complement pathway. 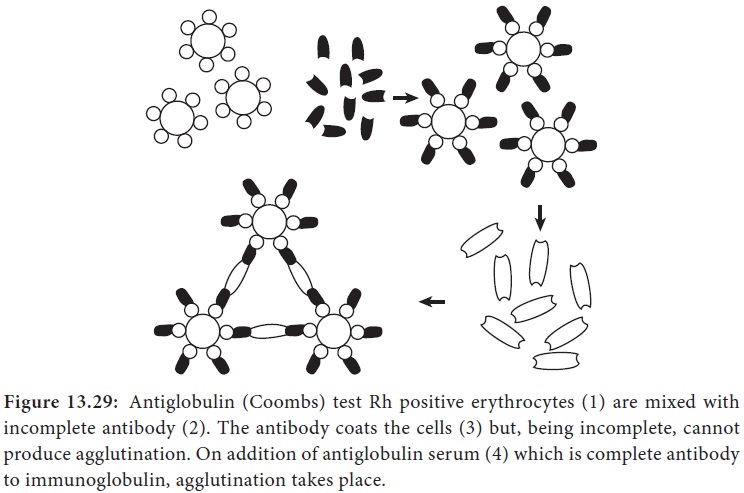 ·        It has a pentameric structure consisting of five monomeric units linked by J chain and disulphide bonds at the Fc fragment (Figure 13.27).

·        It is the first immunoglobulin made during B cell maturation and individual IgM monomers are expressed on B cells, serving as the antibody component of the B cell receptor (BCR). 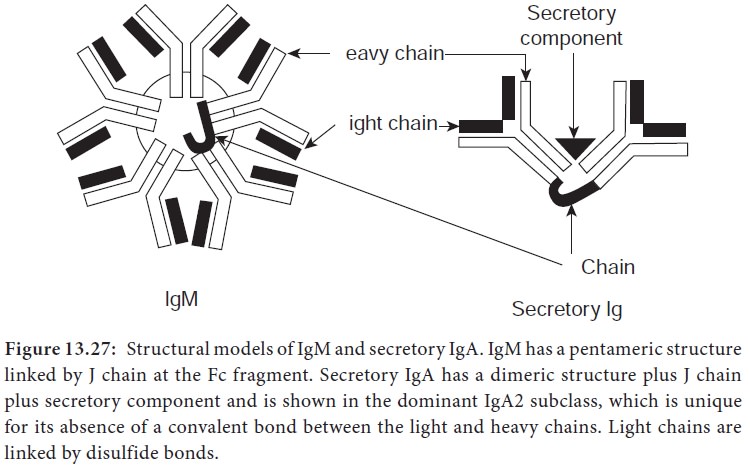 ·        IgM tends to remain in the bloodstream, where it agglutinates (clumps) bacteria, activates complement by the classical pathway and enhances the ingestion of pathogens by phagocytic cells.

·        IgD accounts for about less than 1% of the total immunoglobulin pool.

·        One unique structural feature is the presence of only a single H-H inter chain bond along with two H-L interchain bonds.

·        IgD antibodies are abundant in combination with IgM on the surface of B cells and thus are part of the B cell receptor complex. Therefore their function is to signal the B cell to start antibody production upon initial antigen binding.

·        IgE accounts for only 0.004% of serum immunoglobulin. It has a monomeric structure. It is also called reagin or reaginic antibody.

·        Theskin sensitizing and anaphylactic antibodies belong to this class.

·        The Fc portion of IgE can bind to Fc receptors specific for IgE that are found on mast cells, eosinophils and basophils. Thus these cells can become coated with IgE molecules. Whentwocell-boundIgEmolecules are cross linked by binding to the same antigen, the cells degranulate. This degranulation releases histamine and other mediators of inflammation.

·        IgE also stimulates production of an excessive number of eosinophils in the blood (eosinophilia) and increased rate of movement of the intestinal contents (gut hypermotility) which aid in the elimination of helminthic parasites. IgE has a half life of 2-3 days.

Since antibodies are glycoproteins, they can themselves function as potent immunogens to induce an antibody response. Such anti-Ig antibodies are powerful tools for the study of B cell development and humoral immune response. The antigenic determinants or epitopes, on immunoglobulin molecules fall into three major categories: isotypic, allotypic and idiotypicdeteminants, which are located in characteristic portions of the molecule.