Intact skin contributes greatly to host resistance. It forms a very effective mechanical barrier to microbial invasion. Its outer layer consists of thick, closely packed cells called keratinocytes, The skin is slightly acidic (around pH 5-6) due to skin oil, secretion from sweat glands and organic acids produced by commensal Staphylococci. It also contains a high concentration of sodium chloride and is subject to periodic drying.

The mucous membranes of the eye (conjunctiva), the respiratory, digestive and urogenital systems withstand microbial invasion. The intact stratified squamous epithelium and mucus secretions form a protective covering that resists penetration and traps many microorganisms. Many mucosal surfaces are bathed in specific antimicrobial secretions. One antibacterial substance in these secretions is lysozyme, an enzyme that lyses bacteria. Mucous secretions possess the iron binding protein, lactoferrin. Lactoferrin sequesters iron from the plasma reducing the amount of iron available to invading microbial pathogens and prevents their ability to multiply. Mucous membranes produce lactoperoxidase, an enzyme that catalyzes the production of superoxide radicals, reactive oxygen intermediate that is toxic to many microorganisms.

The mammalian respiratory system has strong defense mechanisms. The average person inhales at least eight microorganisms a minute or 10,000 each. Microbes larger than 10μm are trapped by hairs and cilia lining the nasal cavity. The cilia in the nasal cavity beat toward the pharynx, so that mucus with its trapped microorganisms is moved toward the mouth and expelled. Microbes smaller than 10μm pass through the nasal cavity and are trapped by the mucociliary blanket and the trapped microbes are transported by ciliary action that moves them away from lungs. Coughing and sneezing reflexes clear the respiratory system of microorganisms by expelling air forcefully from the lungs through the mouth and nose, respectively. Salivation also washes microorganisms from the mouth and nasopharyngeal areas into the stomach.

Most microorganisms that reach the stomach are killed by gastric juice. (pH 2-3). However, organisms embedded in food particles are protected from gastric juice and reach the small intestine. There microorganisms are damaged by various pancreatic enzymes, bile, enzymes in intestinal secretions and GALT system. Normal microbiota of the large intestine is important in preventing the establishment of pathogens. The mucous membranes of the intestinal tract contain paneth cells. These cells produce lysozyme and cryptins (toxic for bacteria).

Under normal circumstances, the kidneys, ureters and urinary bladder of mammals are sterile. Urine within the urinary bladder is also sterile. In addition to removing microbes by flushing action, urine kills some bacteria due to its low pH and the presence of urea and other metabolic end products (uric acid, hippuric acid, indican, fatty acids, mucin, and enzymes). The acidic environment (pH 3-5) of the vagina is unfavorable to most microbes.

The conjunctiva is specialized mucus secreting epithelial membrane that lines the interior surface of each eyelid and the exposed surface of the eye ball. It is kept moist by the continuous flushing action of tears. Tears contain large amounts of lysozyme, lactoferrin, and antibody and thus provide chemical as well as physical protection (Figure 13.18). 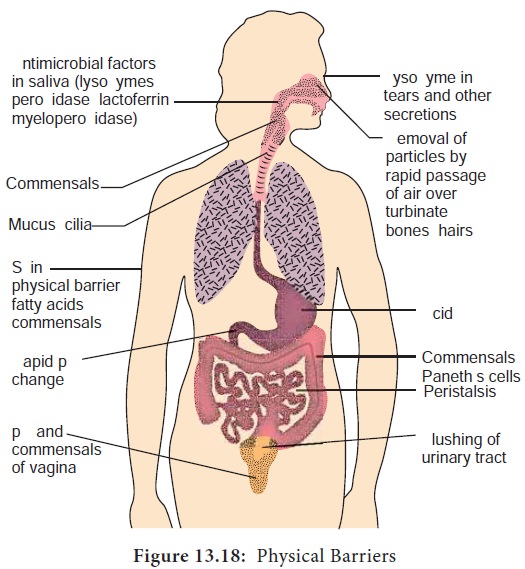 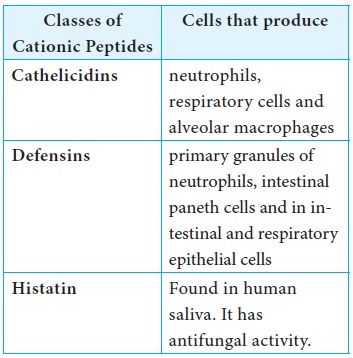 The complement system is a part of the immune system, consists of a series of proteins that interact with one another in a highly regulated manner, in order to eliminate pathogens. Complements are soluble proteins and glycoproteins mostly produced by hepatocytes. More than 20 types of complements are present in serum found circulating normally in human body in inactive forms (called as zymogens or proenzymes). Complement activation is triggered by an antibody when it is bound to the antigen. It can also be triggered by some components of innate immunity. Thus the complement system works in both innate and acquired immunity.

The complement activation occurs via three pathways which are: 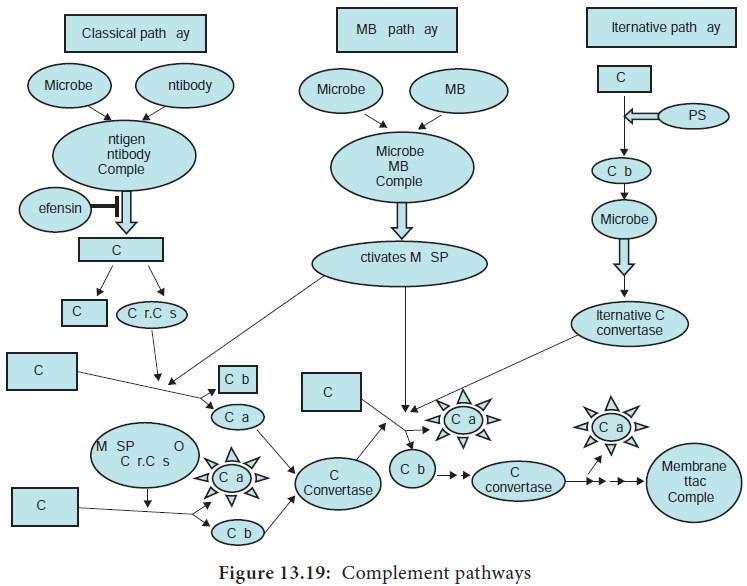 Some major functions of complements are:

·        Activation of mast cells and basophils and enhancement of inflammation

·        Immune clearance and inflamma-tion by attracting macrophages and neutrophils.

i. Phagocytosis is the ingestion by phagocytic cells of invading foreign particles such as bacteria. After ingestion, the foreign particle is entrapped in a phagocytic vacuole (phagosome), which fuses with lysosomes forming the phagolysosome. The lysosomes release their powerful lytic enzymes which digest the particle. (Figure 13.20). Phagocytosis is conducted by blood monocytes, neutrophils and tissue macrophages. Phagocytosis may be enhanced by a variety of factors collectively referred to as opsonins which consist of antibodies and various serum components of complement. 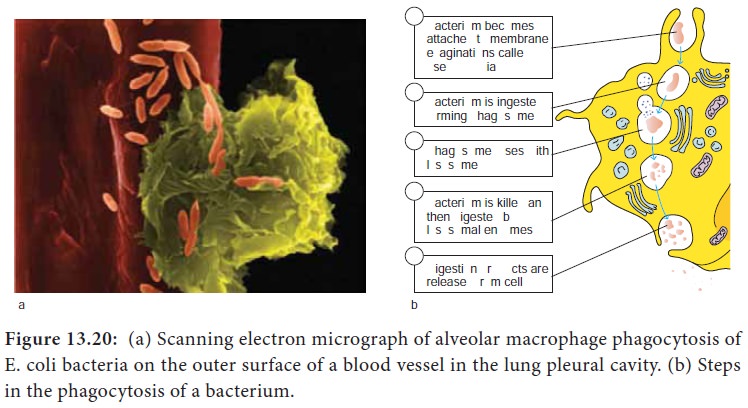 Tissue damage caused by a wound or by an invading pathogenic microorganism induces a complex sequence of events collectively known as inflammatory response. Inflammation can either be acute or chronic. The gross features were described over 2000 years ago and are still known as the cardinal signs of inflammation: redness (rubor), warmth (calor), pain (dolor), swelling (tumor), and loss of function (functiolaesa)

The cardinal signs of inflammation reflect the three major events of an inflammatory response.

1. Vasodilation (an increase in the diameter of blood vessels) of nearby capillaries occurs as the vessels that carry blood away from the affected area constrict. This results in engorgement of the capillary network. The engorged capillaries are responsible for tissue redness (erythema) and an increase in temperature.

2. An increase in capillary permeability facilitates an influx of fluid and cells from the engorged capillaries into the tissue. The fluid that accumulates (exudate) has much higher protein content. Accumulation of exudate contributes to tissue swelling (edema)

3. Influx of phagocytes from the capillaries into the tissues is facilitated by increased capillary permeability. As phagocytic cells accumulate at the site and begin to phagocytoses bacteria, they release lytic enzymes, which can damage nearby healthy cells. The accumulation of dead cells, digested material and fluid forms substances called pus.