Substances capable of inducing a specific immune response are called antigens. The molecular properties of antigens and the way in which these properties ultimately contribute to immune activation are central to our understanding of the immune system.

Two properties are exhibited by antigens; they are immunogenicity and antigenicity. Immunogenicity is the ability of an antigen to induce a humoral and / or cell mediated immune response.

Although a substance that induces a specific immune response is usually called an antigen, it is more appropriately called an immunogen. Antigenicity is the ability of an antigen to combine specifically with the final products of the above responses. (antibodies and/or cell surface receptors). All immunogens are antigens but all antigens are not immunogens. Some small molecules called haptens are antigenic but incapable, by themselves, of inducing a specific immune response. In other words haptens lack immunogenicity. Examples of haptens are dinitrophenol, penicillin and m-amino benzene sulphonate.

Immunogenicity is not an intrinsic property of an antigen but rather depends on a number of properties of the particular biological system that the antigen encounters. The factors that influence immunogenicity can be divided under two categories.

1.     Contribution of the immunogen to immunogenicity

2.     Contribution of the biological system to immunogenicity

1. Contribution of the immunogen to immunogenicity

Immunogenicity is determined in part, by the following four properties of the immunogen.

The immune system normally discriminates between self and non self, so that only molecules that are foreign to the host are immunogenic. For example, albumin isolated from the serum of a rabbit and injected back into the same or another rabbit will not induce an immune response but the same protein when injected into other vertebrate species (rat) will induce an immune response.

Proteins are the most potent immunogens with polysaccharides ranking second. In contrast, lipids and nucleic acids of an infectious agent generally do not serve as immunogens unless they are complexed with proteins or polysaccharides (examples- Lipoprotein or nucleo – protin). For example, attachment of tyrosine chains to the weakly immunogenic protein gelatin markedly enhances its immunogenicity.

The development of both humoral and cell mediated immune responses requies interaction of T cells with antigen that has been processed and presented together with MHC(Major Histocompatibility Complex) molecules. To TH cells, the antigen must be presented with class II MHC molecules on an antigen must be presented with class I MHC molecule on an altered self cell. Macromolecules that cannot be degraded and presented with MHC molecules are poor immunogens. This can be illustrated with polymers of D-amino acids, which are stereoisomers of the naturally occurring L-amino acids. Because the degradative enzymes within antigen presenting cells can degrade only proteins containing L-amino acids, polymers of D-amino acids cannot be processed and thus are poor immunogens (Figure 13.22).

2. Contribution of the biological system to immunogenicity

Even if a macromolecule has the properties that contribute to immunogenicity, its ability to induce an immune response will depend on the following properties of the biological system that the antigen encounters.

A. Genetic constitution of the host animal

B. Immunogen dosage and route of administration

Whether an immunogenwill induce an immune response also depends on the dose and mode of administration. A quantity of an immunogen that has no effect when injected intravenously may evoke a good antibody response when injected subcutaneously, particularly if it is accompanied by an adjuvant.

The response an immunogen is often enhanced if it is administered as a mixture with adjuvants. Adjuvants are substances that enhance the immunogenicity of an antigen. Adjuvants function in one or more of the following ways. (1) by prolonging retention of the immunogen (2) by increasing the effective size of the immunogen or (3) by stimulating the local influx of macrophages and/ or other immune cell types to the injection site and promoting their subsequent activities. Example: Freund’s incomplete antigen, Freund’s complete antigen, Mycobacterium tuberculosis, Aluminum potassium sulphate (alum) and Bacterial lipopolysaccharide (LPS).

Immune cells do not interact with or recognize an entire immunogen molecule instead; lymphocytes recognize  discrete sites on the macromolecule called epitopes or antigenic determinants. Epitopes are the immunologically active regions of an immunogen that bind to antigen specific membrane receptors on lymphocytes or to secreted antibodies. Antigenic epitopes may consist of a single epitope or have varying number of the same epitope on the same molecule (Example: polysaccharides). 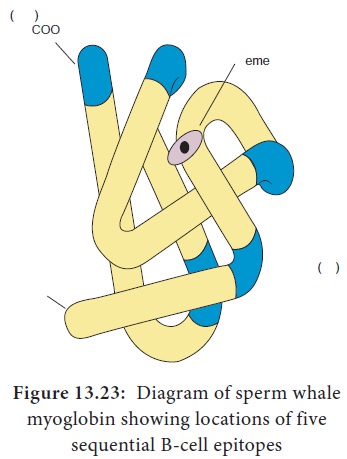 The size of a single epitope may be 4 or 5 aminoacid or monosaccharide residues. The recognition of antigens by T cells and B cells is fundamentally different B cells recognize soluble antigen when it binds to their membrane-bound antibody. (Figure 13.23 & 13.24). Most T cells recognize only peptides combined with MHC molecules on the surface of antigen presenting cells and altered self cells. 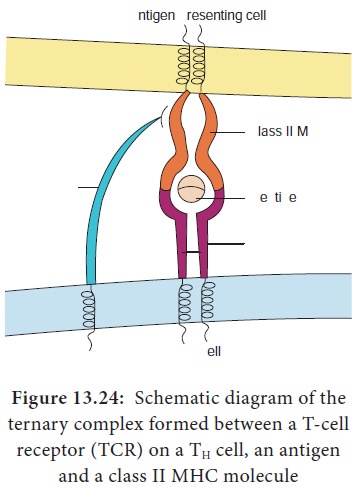 Haptens and the Study of Antigenicity

The pioneering work of Karl Landsteiner in the 1920s and 1930s created a simple, chemically defined system for studying the binding of an individual antibody to a unique epitope on a complex protein antigen. Landsteiner employed various haptens(small organic molecules that are antigenic but not immunogenic). Chemical coupling of a hapten to a large protein called a carrier, yields an immunogenic hapten-carrier conjugate.

When two antigens possess structurally similar antigenic determinants, the antibodies obtained to one of these antigens tend to react with the other antigen. These reactions are called cross reactions.