Organs of the Immune System

The immune system consists of structurally varied organs that are distributed throughout the body.

Organs of the Immune System 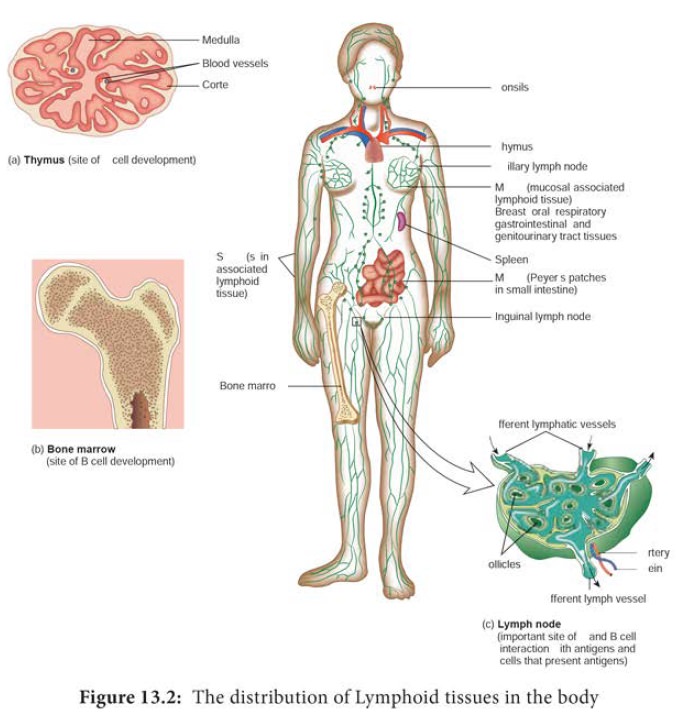 The thymus is a highly organized lymphoid organ located above the heart. The thymus consists of two lobes. 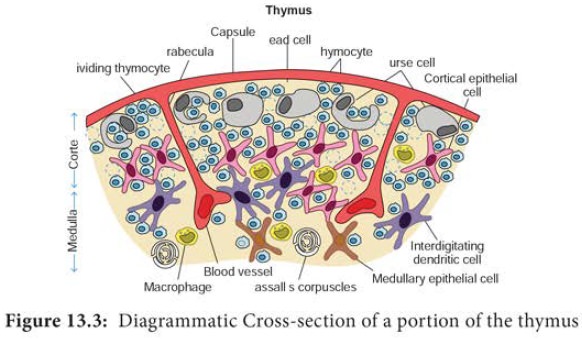 Each Lobe is surrounded by a capsule and is divided into several lobules by strands of connective tissue called trabeculae. Each lobule contains an outer cortex and an inner medulla. The cortex contains many dividing immature lymphocytes and isolated Hassall’s corpuscles (Figure 13.3). The primary function of the thymus is the production of mature T cells. Precursor cells from the bone marrow migrate into the outer cortex where they proliferate. As they mature, about 98% die. This is due to a process known as thymic selection in which T cells that recognize host (self) antigens are destroyed. The remaining 2% move into the medulla of the thymus, become mature T cells and subsequently enter the blood stream. These T cells recognize non host (non self) antigens.

In mammals, the bone marrow (Figure 13.4) is the site of B cell maturation. Stromal cells within the bone marrow interact directly with the B cells and secrete various cytokines that are required for B cell development. 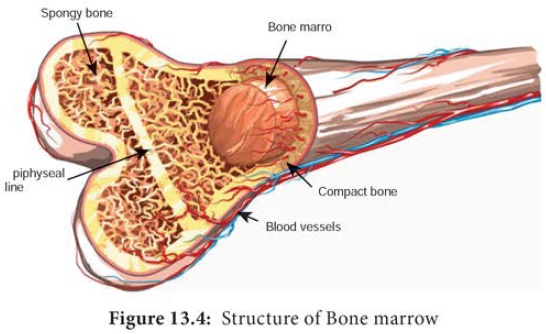 Like thymic selection during T cell maturation, a selection process within the bone marrow eliminates non functioning B cells and those bearing self reactive antigen receptors. In birds, undifferentiated lymphocytes move from the bone marrow to the Bursa of Fabricius, where B cell mature; this is where B cells were first identified and how they came to be known as “B” (for bursa) cells.

The Spleen is the most highly organized secondary lymphoid organ. The spleen is a fist sized organ just behind the stomach. It collects and disposes of aged red blood cells. Its organization is shown schematically in Figure 13.5. The bulk of the spleen is composed of red pulb which is the site of red blood cell disposal. The spleen is not supplied by lymphatic vessels. 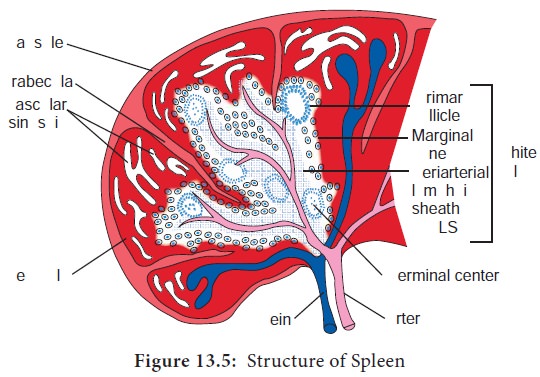 The lymphocytes surround the arterioles entering the spleen, forming areas of white pulp. The inner region of white pulp is divided into a Periarteriolar Lymphoid Sheath (PALS) containing mainly T cells. The spleen filters the blood and traps blood borne microorganisms and antigens. Once trapped by splenic macrophages or dendritic cells, the pathogen is phagocytosed, killed and digested.

The lymph nodes are encapsulated round structures located at the junction of major lymphatic vessels. Lymph node is morphologically divided into three regions: the cortex, the paracortex and the medulla (Figure 13.6). The outer most layer, the cortex contains lymphocytes (mostly B cells), macrophages and follicular dendritic cells arranged in primary follicles. After antigenic challenge, the primary follicles enlarge into secondary follicles, each containing a germinal centre. Beneath the cortex is the paracortex which is populated largely by T lymphocytes and also interdigitating dendritic cells thought to have migrated from tissues to the node. These interdigitating dentritic cells express high levels of class II MHC molecules, which are necessary for presenting antigen to T helper (TH) cells. Lymph nodes taken from neonatally thymectomized (removal of thymus from new born animal) mice have unusually few cells in the paracortical region; the paracortex is therefore sometimes referred to as a thymus dependent area in contrast to the cortex, which is a thymus independent area. The inner most layer of a lymph node, the medulla, is more sparsely populated with lymphoid lineage cells; of those present many are plasma cells actively secreting antibody molecules. Lymph nodes are specialized to trap antigen from regional tissue spaces. As antigen is carried into a lymph node by the lymph, it is trapped, processed and presented together with class II MHC molecules by interdigitating dendritic cells in the paracortex, resulting in the activation of TH cells. 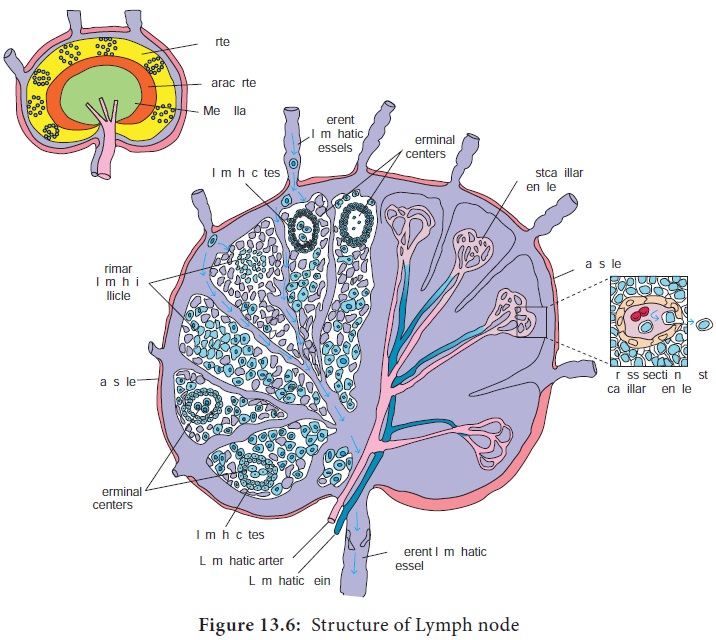 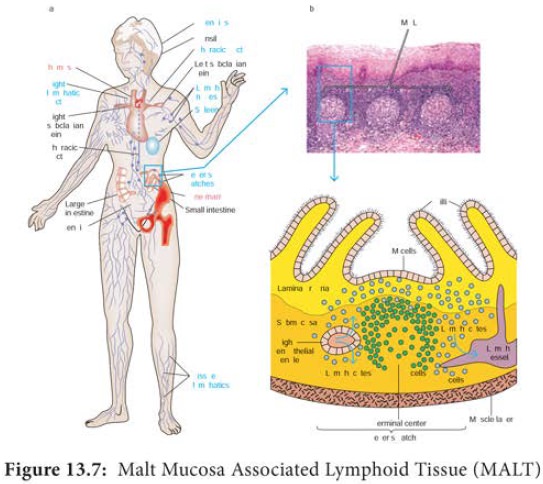 (a) The Peyer’s patch is a representative of the extensive MALT system that is found in the instestine. (b) A stained tissue cross-section of Peyer’s patch lymphoid nodules in the intestinal submucosa is schematically diagrammed in (c). The intestinal lamina propria contains loose clusters of lymphoid cells and diffuse follicles.

(a) M cells, situated in muscous membranes, endocytose antigen from the lumen of the digestive, respiratory, and urogenitial tracts. The antigen is transported across the cell and released into the large basolateral pocket. (b) Antigen transported across the epithelial layer by M cells at an inductive site activates B cells in the underlying lymphoid follicles. The activated B cells differentiate into lgA-producing plasma cells, which migrate along the lamina propria, the layer under the mucosa. The outer mucosal epithelial layer contains intraepithelial lymphocytes, of which many are T cells. 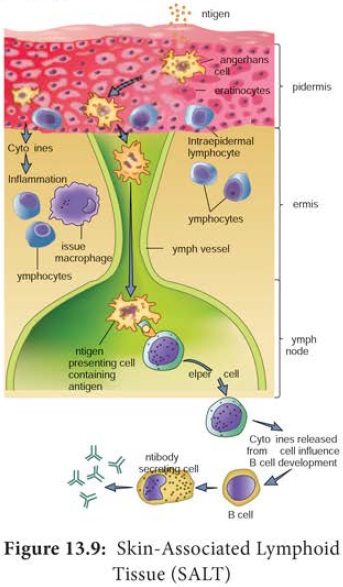 Despite the skin’s defenses, at times pathogenic microorganisms gain access to the tissue under the skin surface. Here, they encounter a specialized set of cells called the skin associated lymphoid tissue (SALT) (Figure 13.9). The major function of SALT is to confine microbial invaders to the area immediately underlying the epidermis and to prevent them from gaining access to the blood stream. One type of SALT is the langerhans cell, a specialized myeloid cell that can phagocytose antigens.