There are many causes, the most common being exposure to drugs, especially certain antibiotics and analgesics, and infections. Often the diagnosis is idiopathic, if no agent is discovered (see Table 6.11). 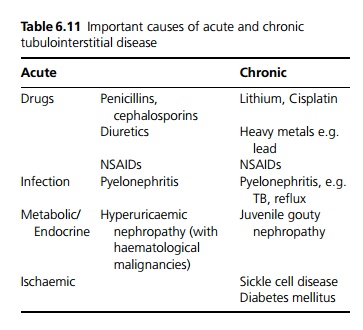 The most common mechanism is a hypersensitivity re-action to the drug, with lymphocytes and eosinophils infiltrating the interstitium causing tissue oedema. The tubular epithelium undergoes acute necrosis.

Patients present usually within 3 weeks of exposure with acute renal failure and variable fever, joint pains and rashes. They often have haematuria and mild proteinuria. Urine volumes may be reduced or normal. Classically there is eosinophilia and eosinophils in the urine.

Withdrawal of the drug often leads to resolution. High dose steroids may be given.

Drugs and toxins such as cisplatin and heavy metals cause chronic inflammation, characterised by fibrosis of the interstitium and atrophy of the tubules leading to chronic renal failure (CRF). This picture is also common in idiopathic interstitial nephritis.

Analgesic nephropathy is a particular form of tubulointerstitial disease caused by longterm use of NSAIDs. There is chronic inflammation and there may also be is-chaemic necrosis of the renal papillae, which can slough off and cause obstruction. Analgesic nephropathy leads to CRF and there is also an increased risk of carcinoma of the urothelium.

This depends on the underlying cause. Acute tubuloin-terstitial nephritis has a good prognosis. Chronic renal failure may progress to end-stage renal disease and require renal replacement therapy.