It is the kitchen technology developed by our ancestors that was using the fermenting bacteria.

As described earlier, it is the kitchen technology developed by our ancestors that was using the fermenting bacteria. Thus it includes the process that is based on the natural capabilities of organisms.

The word fermentation is derived from the Latin verb ‘fervere’ which means ‘ to boil’. Fermentation refers to the metabolic process in which organic molecules (normally glucose) are converted into acids, gases, or alcohol in the absence of oxygen or any electron transport chain. The study of fermentation, its practical uses is called zymology and originated in 1856, when French chemist Louis Pasteur demonstrated that fermentation was caused by yeast. Fermentation occurs in certain types of bacteria and fungi that require an oxygen-free environment to live. The processes of fermentation are valuable to the food and beverage industries, with the conversion of sugar into ethanol to produce alcoholic beverages, the release of CO2 by yeast used in the leavening of bread, and with the production of organic acids to preserve and flavor vegetables and dairy products.

Bioreactor (Fermentor) is a vessel or a container that is designed in such a way that it can provide an optimum environment in which microorganisms or their enzymes interact with a substrate to produce the required product. In the bioreactor aeration, agitation, temperature and pH are controlled. Fermentation involves two process namely upstream and downstream process.

All the process after the fermentation process is known as the downstream process. This process includes distillation, centrifuging, filtration and solvent extraction. Mostly this process involves the purification of the desired product. 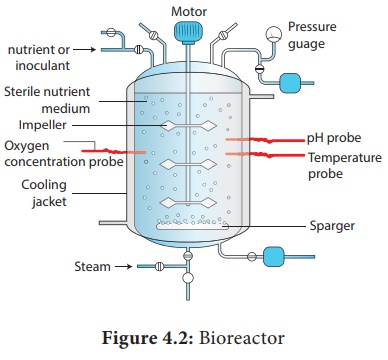 a. Depending upon the type of product, bioreactor is selected.

b. A suitable substrate in liquid media is added at a specific temperature, pH and then diluted.

c. The organism (microbe, animal/plant cell, sub- cellular organelle or enzyme) is added to it.

d. Then it is incubated at a specific temperature for the specified time.

e.      The incubation may either be aerobic or anaerobic.

Application of fermentation in industries

Fermentation has industrial application such as:

Microbes produce compounds that are very useful to man and animals. These compounds are called metabolites, can be grouped into two categories:

When microbes are cultured, they secrete some enzymes into the growth media. These enzymes are industrially used in detergents, food processing, brewing and pharmaceuticals. Eg. protease, amylase, isomerase, and lipase.

4.     Bioconversion, biotransformation or modification of the substrate

The fermenting microbes has the capacity to produce valuable products, eg. conversion of ethanol to acetic acid (vinegar), isopropanol to acetone, sorbitol to sorbose (this is used in the manufacture of vitamin C), sterols to steroids.

Single cell proteins are dried cells of microorganism that are used as protein supplement in human foods or animal feeds. Single Cell Protein (SCP) offers an unconventional but plausible solution to protein deficiency faced by the entire humanity. Although single cell protein has high nutritive value due to their higher protein, vitamin, essential amino acids and lipid content, there are doubts on whether it could replace conventional protein sources due to their high nucleic acid content and slower in digestibility. Microorganisms used for the production of Single Cell Protein are as follows:

The single cell proteins forms an important source of food because of their protein content, carbohydrates, fats, vitamins and minerals. It is used by Astronauts and Antarctica expedition scientists.

Spirulina can be grown easily on materials like waste water from potato processing plants (containing starch), straw, molasses, animal manure and even sewage, to produce large quantities and can serve as food rich in protein, minerals, fats, carbohydrate and vitamins. Such utilization also reduces environmental pollution. 250 g of Methylophilus methylotrophu s,as its  high rate of biomass production and growth,can be expected to produce 25 tonnes of protein. 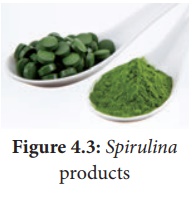 ·         It is used in cosmetics products for healthy hair and skin

·         It is used in poultry as the excellent source of proteins and other nutrients, it is widely used for feeding cattle, birds, fishes etc.

·         It is used in food industry as aroma carriers, vitamin carrier, emulsifying agents to improve the nutritive value of baked products, in soups, in ready-to-serve-meals, in diet recipes

·         It is used in industries like paper processing, leather processing as foam stabilizers.