a. Not always required in genetic engineering

b. Essential tools in genetic engineering

b. required by bacteria

b. hybridization of DNA of one organism to that of the others.

I. Recombinant DNA technology is popularly known as genetic engineering is a stream of biotechnology which deals with the manipulation of genetic materials by man invitro

II. pBR322 is the first artificial cloning vector developed in 1977 by Boliver and Rodriguez from E.coli plasmid

Choose the correct option regarding above statements

6. The process of recombinant DNA technology has the following steps

I. amplication of the gene

II. Insertion of recombinant DNA into the host cells

7. Which one of the following palindromic base sequence in DNA can be easily cut at about the middle by some particular restriction enzymes?

9. Which of the following one is used as a Biosensors? 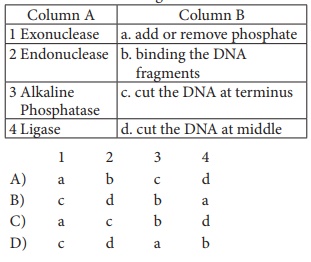 11 In which techniques Ethidium Bromide is used?

12 Assertion : Agrobacterium tumifaciens is popular in genetic engineering because this bacteriumis associated with the root nodules of all cereals and pulse crops

Reason: A gene incorporated in the bacterial chromosomal genome gets atomatically transferred to the cross with which bacterium is associated.

a) Both assertion and reason are true. But reason is correct explanation of assertion.

b) Both assertion and reason are true. But reason is not correct explanation of assertion.

e) Both assertion and reason are false.

13 Which one of the following is not correct statement.

b) Multiple cloning site is known as Polylinker

d) Polylactic acid is a kind of biodegradable and bioactive thermoplastic.

16 Some of the characteristics of Bt cotton are