The basic tools are enzymes, vectors and host organisms.

Now we know from the foregoing discussion that in order to generate recombinant DNA molecule, certain basic tools are necessary for the process. The basic tools are enzymes, vectors and  host organisms. The most  important enzymes required forgenetic engineering are the restriction enzymes, DNA ligase and alkaline phosphatase. 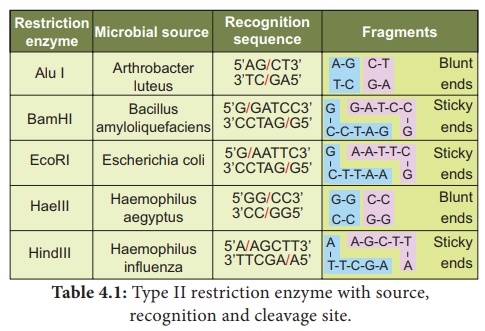 a. Exonucleases are enzymes which remove nucleotides one at a time from the end of a DNA molecule. e.g. Bal 31, Exonuclease III.

The restriction enzymes are called as molecular scissors. These act as foundation of recombinant DNA technology. These enzymes  exist in many bacteria where they function as a part of their defence mechanism called restriction- modification system.

There are three main classes of restriction endonuclease : Type I, Type II and Type III, which differ slightly by their mode of action. Only type II enzyme is preferred for use in recombinant DNA technology as they recognise and  cut  DNA  within  a  specific  sequence typically consisting of 4-8 bp. Examples of certain enzymes are given in table 5.1.

Restriction endonucleases are named by a standard procedure. The first letter of the enzymes indicates the genus name, followed by the first two letters of the species, then comes the strain of the organism and finally a roman numeral indicating the order of discovery. For example, EcoRI is from Escherichia (E) coli (co), strain RY 13 (R) and first endonuclease (I) to be discovered.

It contains 2 different antibiotic resistance genes and recognition site for several restriction enzymes. This sequence is referred to as a restriction site and is generally –palindromic which means that the sequence in both DNA strands at this site read same in 5’ – 3’ direction and in the 3’-5’ direction

Example: MALAYALAM: This phrase is read the same in either of the directions.

Note: That the sequence of the base pairs in the reverse direction when compare to the first sequence. 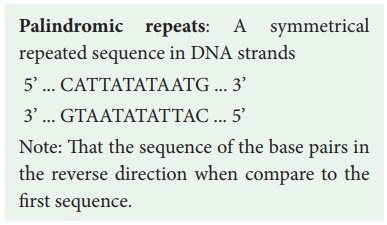 The exact kind of cleavage produced by a restriction enzyme is important in the design of a gene cloning experiment. Some cleave both strands of DNA through the centre resulting in blunt or flush end. These are known as symmetric cuts. Some enzymes cut in a way producing protruding and recessed ends known as sticky or cohesive end. Such cut are called staggered or asymmetric cuts.

DNA ligase enzyme joins the sugar and phosphate molecules of double stranded DNA (dsDNA) with 5’-PO4 and a 3’-OH in an Adenosine Triphosphate (ATP) dependent reaction. This is isolated from T4 phage. 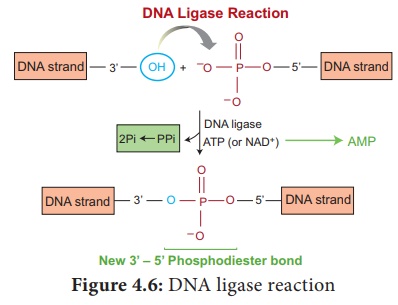 It is a DNA modifying enzymes and adds or removes specific phosphate group at 5’ terminus of double stranded DNA (dsDNA) or single stranded DNA (ssDNA) or RNA. Thus it prevents self ligation. This enzyme is purified from bacteria and calf intestine. 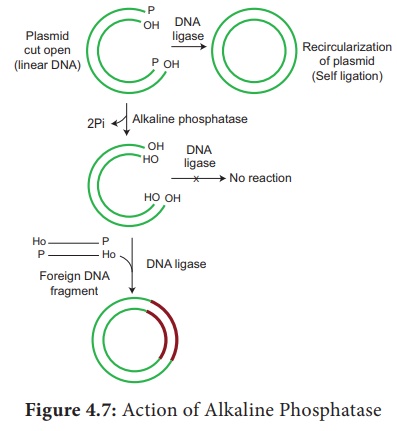 Another major component of a gene cloning experiment is a vector such as a plasmid. A Vector is a small DNA molecule capable of self-replication and is used as a carrier and transporter of DNA fragment which is inserted into it for cloning experiments.

Vector is also called cloning vehicle or cloning DNA. Vectors are of two types: i) Cloning Vector, and

Vectors are able to replicate autonomously to produce multiple copies of them along with their DNA insert in the host cell.

·        It should be small in size and of low molecular weight, less than 10 Kb (kilo base pair) in size so that entry/transfer into host cell is easy.

·         Vector must contain an origin of replication so that it can independetly replicate within the host.

·         It should contain a suitable marker such as antibiotic resistance, to permit its detection in transformed host cell.

·         Vector should have unique target sites for integration with DNA insert and should have the ability to integrate with DNA insert it carries into the genome of the host cell. Most of the commonly used cloning vectors have more than one restriction site. These are Multiple Cloning Site (MCS) or polylinker. Presence of MCS facilitates the use of restriction enzyme of choice.

The following are the features that are required to facilitate cloning into a vector.

1. Origin of replication (ori): This is a sequence from where replication starts and piece of DNA when linked to this sequence can be made to replicate within the host cells. 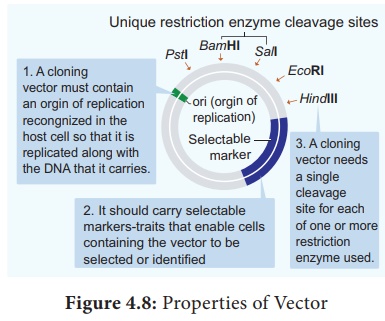 3. Cloning sites: In order to link the alien DNA, the vector needs to have very few, preferably single, recognition sites for the commonly used restriction enzymes.

Few types of vectors are discussed in detail below:

Plasmids are extra c h rom o s om a l , self replicating ds circular DNA molecules, found in the bacterial cells in addition to the bacterial chromosome. Plasmids contain Genetic information for their own replication. 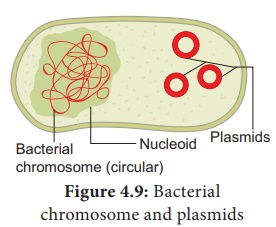 pBR 322 plasmid is a reconstructed plasmid and most widely used as cloning vector; it contains 4361 base pairs. In pBR, p denotes plasmid, Band R respectively the names of scientist Boliver and Rodriguez who developed this plasmid. The number 322 is the number of plasmid developed from their laboratory. It contains ampR and tetR two different antibiotic resistance genes and recognition sites for several restriction enzymes. (Hind III, EcoRI, BamH I, Sal I, Pvu II, Pst I, Cla I), ori and antibiotic resistance genes. Rop codes for the proteins involved in the replication of the plasmid.

Ti plasmid is found in Agrobacterium tumefaciens, a bacteria responsible for inducing tumours in several dicot plants. The plasmid carries transfer(tra) gene which help to  transfer  T-  DNA from one  bacterium to other bacterial or plant cell. It has Onc gene for oncogenecity, 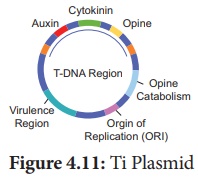 ori gene for origin for replication and inc gene for incompatibility. T-DNA of Ti-Plasmid is stably integrated with plant DNA. Agrobacterium plasmids have been used for introduction of genes of desirable traits into plants.

Transposons (Transposable elements or mobile elements) are DNA sequence able to insert itself at a new location in the genome without having any sequence relationship with the target locus and hence transposons are called walking genes or jumping genes. They are used as genetic tools for analysis of gene and protein functions, that produce new phenotype on host cell.The use of transposons is well studied in Arabidopsis thaliana and bacteria such as Escherichia coli. 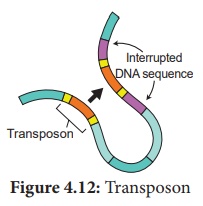 Vectors which are suitable for expressing foreign proteins are called expression vectors. This vector consists of signals necessary for transcription and translation of proteins in the host. This helps the host to produce foreign protein in large amounts. Example: pUC 19. 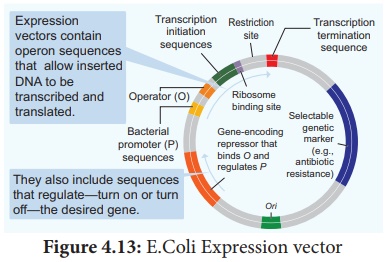 Cosmids are plasmids containing the ‘cos’ - Cohesive Terminus, the sequence having cohesive ends. They are hybrid vectors derived from plasmids having a fragment of lambda phage DNA with its Cos site and a bacterial plasmid.

Lambda genome: Lambda phage is a temperate bacteriophage that infects Escherichia coli. The genome of lambda-Phage is 48502 bp long, i.e. 49Kb and has 50 genes.

Phagemids are reconstructed plasmid vectors, which contain their own origin - ‘ori’ gene and also contain origin of replication from a phage. pBluescript SK (+/–) is an example of phagemid vector.

BAC is a shuttle plasmid vector, created for cloning large-sized foreign DNA. BAC vector is one of the most useful cloning vector in r-DNA technology they can clone DNA inserts of upto 300 Kb and they are stable and more user-friendly. 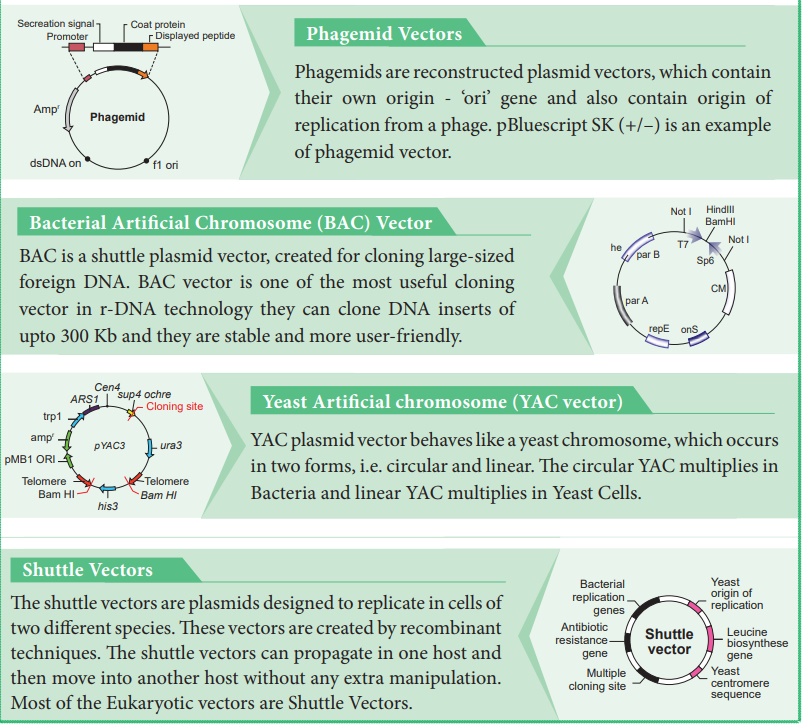 The propagation of the recombinant DNA molecules must occur inside a living system or host. Many types of host cells are available for gene cloning which includes E.coli, yeast, animal or plant cells. The type of host cell depends upon the cloning experiment. E.coli is the most widely used organism as its genetic make-up has been extensively studied, it is easy to handle and grow, can accept a range of vectors and has also been studied for safety. One more important feature of E.coli to be preferred as a host cell is that under optimal growing conditions the cells divide every 20 minutes.

Since the DNA is a hydrophilic molecule,it cannot pass through cell membranes, In order to force bacteria to take up the plasmid, the bacterial cells must first be made competent to take up DNA. This is done by treating them with a specific concentration of a divalent cation such as calcium. Recombinant DNA can then be forced into such cells by incubating the cells with recombinant DNA on ice, followed by placing them briefly at 420C (heatshock) and then putting them back on ice. This enables bacteria to take up the Recombinant DNA.

For the expression of eukaryotic proteins, eukaryotic cells are preferred because to produce a functionally active protein it should fold properly and post translational modifications should also occur, which is not possible by prokaryotic cell (E.coli).