17. How do you use the biotechnology in modern practice?

Answer: Modern biotechnology embraces all methods of genetic modification by recombinant DNA and cell fusion technology. The major focus of biotechnology are:

18. What are the materials used to grow microorganism like Spirulina?

Answer: (i) Spirulina can be grown easily on materials like waste water from potato processing plants (containing starch), straw, molasses, animal manure and even sewage, to produce large quantities and can serve as food rich in protein, minerals, fats, carbohydrate and vitamins.

(iii) 250 g of Methylophilus methylotrophus, as its high rate of biomass production and growth, can be expected to produce 25 tonnes of protein.

19. You are working in a biotechnology lab with a becterium namely E.coli. How will you cut the nucleotide sequence? explain it.

Answer: (i) A restriction enzyme or restriction endonuclease is an enzyme that cleaves DNA into fragments at or near specific recognition sites within the molecule known as restriction sites.

(ii) Based on their mode of action restriction enzymes are classified into Exonucleases and Endonucleases.

(a) Exonucleases are enzymes which removenucleotides one at a time from the end of a DNA molecule.

(b) Endonucleases are enzymes which break the internal phosphodiester bonds within a DNA molecule.

There are three main classes of restriction endonuclease:

They differ slightly by their mode of action.

Based on the position at which we wish to cut the nucleotide sequence and type of cleavage the corresponding restriction endonuclease may be used.

20. What are the enzymes you can used to cut terminal end and internal phospho di ester bond of nucleotide sequence?

(i) Exonucleases are enzymes which remove nucleotides one at a time from the end of a DNA molecule.

(ii) Endonucleases are enzymes which break the internal phosphodiester bonds within a DNA molecule.

(i) pBR 322 plasmid is a reconstructed plasmid and most widely used as cloning vector; it contains 4361 base pairs.

(ii) In pBR, p denotes plasmid, B and R respectively the names of scientist B Oliver and Rodriguez who developed this plasmid. The number 322 is the number of plasmid developed from their laboratory.

(iv) Rop codes for the proteins involved in the replication of the plasmid.

23. Mention the application of Biotechnology.

Answer: (i) Biotechnology is one of the most important applied interdisciplinary sciences of the 21st century. It is the trusted area that enables us to find the beneficial way of life.

(iv) The development of transgenics as pesticide resistant, stress resistant and disease resistant varieties of agricultural crops is the immense outcome of biotechnology.

(v) The synthesis of human insulin and blood protein in E.coli and utilized for insulin deficiency disorder in human is a breakthrough in biotech industries in medicine.

(vi)  The synthesis of vaccines, enzymes, antibiotics, dairy products and beverages are the products of biotech industries.

(vii) Biochip based biological computer is one of the successes of bio technology.

24. What are restriction enzyme. Mention their type with role in Biotechnology.

(ii) Based on their mode of action restriction enzymes are classified into Exonucleases and Endonucleases.

(a) Exonucleases are enzymes which remove nucleotides one at a time from the end of a DNA molecule.

(b) Endonucleases are enzymes which break the internal phosphodiester bonds within a DNA molecule.

(i) The restriction enzymes are called as molecular scissors. These act as foundation of recombinant DNA technology.

(ii) There are three main classes of restriction endonuclease : Type I, Type II and Type III, which differ slightly by their mode of action.

(iii) Only type II enzyme is preferred for use in recombinant DNA technology as they recognise and cut DNA within a specific sequence typically consisting of 4-8 bp. Example: EcoRI.

(v) Restriction endonucleases are named by a standard procedure.

(vi) For example, EcoRI is from Escherichia (E) coli (co), strain RY 13 (R) and first endonuclease (I) to be discovered.

(vii) It contains 2 different antibiotic resistance genes and recognition site for several restriction enzymes. This sequence is referred to as a restriction site and is generally -palindromic which means that the sequence in both DNA strands at this site read same in 5’ - 3’ direction and in the 3’-5’ direction.

(viii) The exact kind of cleavage produced by a restriction enzyme is important in the design of a gene cloning experiment.

(ix) Some cleave both strands of DNA through the centre resulting in blunt or flush end. These are known as symmetric cuts.

(x) Some enzymes cut in a way producing protruding and recessed ends known as sticky or cohesive end. Such cut are called staggered or asymmetric cuts.

25. Is their any possibilities to transfer a suitable desirable gene to host plant without vector? Justify your answer.

b. Microinjection: The DNA is directly injected into the nucleus using fine tipped glass needle or micro pipette to transform plant cells. The protoplasts are immobilised on a solid support (agarose on a microscopic slide) or held with a holding pipette under suction.

c. Electroporation: Methods of Gene Transfer: A pulse of high voltage is applied to protoplasts, cells or tissues which makes transient pores in the plasma membrane through which uptake of foreign DNA occurs.

d. Liposome mediated method of gene transfer: Liposomes the artificial phospholipid vesicles are useful in gene transfer. The gene or DNA is transferred from liposome into vacuole of plant cells. It is carried out by encapsulated DNA into the vacuole. This technique is advantageous because the liposome protects the introduced DNA from being damaged by the acidic pH and protease enzymes present in the vacuole. Liposome and tonoplast of vacuole fusion resulted in gene transfer. This process is called lipofection. 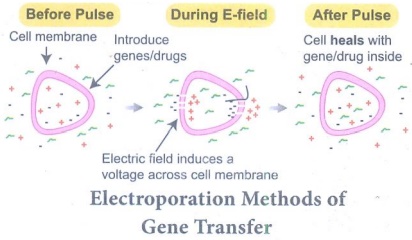 e. Biolistics: The foreign DNA is coated onto the surface of minute gold or tungsten particles (1-3 µm) and bombarded onto the target tissue or cells using a particle gun (also called as gene gun/micro projectile gun/shotgun). Then the bombarded cells or tissues are cultured on selected medium to regenerate plants from the transformed cells.

26. How will you identify a vectors?

Answer: (i) Major component of a gene cloning experiment is a vector such as a plasmid.

(ii) A Vector is a small DNA molecule capable of self-replication and is used as a carrier and transporter of DNA fragment which is inserted into it for cloning experiments.

(a) Cloning Vector, and

Vectors are able to replicate autonomously to produce multiple copies of them along with their DNA insert in the host cell.

(i) It should be small in size and of low molecular weight, less than 10 Kb (kilo base pair) in size so that entry/transfer into host cell is easy.

(ii) Vector must contain an origin of replication so that it can independetly replicate within the host.

(iii) It should contain a suitable marker such as antibiotic resistance, to permit its detection in transformed host cell.

(iv) Vector should have unique target sites for integration with DNA insert and should have the ability to integrate with DNA insert it carries into the genome of the hostcell. Most of the commonly used cloning vectors have more than one restriction site. These are Multiple Cloning Site (MCS) or polylinker. Presence of MCS facilitates the use of restriction enzyme of choice.

The following are the features that are required to facilitate cloning into a vector.

1. Origin of replication (ori): This is a sequence from where replication starts and piece of DNA when linked to this sequence can be made to replicate within the host cells.

3. Cloning sites: In order to link the alien DNA, the vector needs to have very few, preferably single, recognition sites for the commonly used restriction enzymes.

Answer: Southern Blotting : The transfer of DNA from agarose gels to nitrocellulose membrane.

Northern Blotting: The transfer of RNA to nitrocellulose membrane.

(a) Use of low toxicity compounds which do not remain active in the soil.

(iv) The ability to conserve soil structure and microbes.

29. Write the advantages and disadvantages of Bt cotton.

(i) Yield of cotton is increased due to effective control of bollworms.

(ii) Reduction in insecticide use in the cultivation of Bt cotton.

(iii) Potential reduction in the cost of cultivation.

(i) Cost of Bt cotton seed is high.

(ii) Effectiveness up to 120 days after that efficiency is reduced.

(iii) Ineffective against sucking pests like jassids,aphids and whitefly.

It is defined as the use of microorganisms or plants to clean up environmental pollution. It is an approach used to treat wastes including wastewater, industrial waste and solid waste. Bioremediation process is applied to the removal of oil, petrochemical residues, pesticides or heavy metals from soil or ground water. In many cases, bioremediation is less expensive and more sustainable than other physical and chemical methods of remediation. Bioremediation process is a cheaper and eco-friendly approach and can deal with lower concentrations of contaminants more effectively. The strategies for bioremediation in soil and water can be as follows:

(i) Use of indigenous microbial population as indicator species for bioremediation process.

(ii) Bioremediation with the addition of adapted or designed microbial inoculants.

(iii) Use of plants for bioremediation - green technology.

Some examples of bioremediation technologies are:

(i) Phytoremediation - use of plants to bring about remediation of environmental pollutants.

(ii) Mycoremediation - use of fungi to bring about remediation of environmental pollutants.

(iii) Bioventing is the process that increases the oxygen or air flow to accelerate the degradation of environmental pollutants.

(iv) Bioleaching is the use of microorganisms in solution to recover metal pollutants from contaminated sites.

31. Write the benefits and risk of Genetically Modified Foods.

(i) High yield without pest.

(iv) Adverse effect in immune system because of bacterial protein.

(v) Loss of viability of seeds show in terminatorseed technology of GM crops.