Some of the major advancements in modern biotechnology are described below.

Genetic engineering or recombinant DNA technology or gene cloning is a collective term that includes different experimental protocols resulting in the modification Bacterium and transfer of DNA from one organism to another.

The definition for conventional recombination was already given in Unit II. Conventional recombination involves exchange or recombination of genes between homologous chromosomes during meiosis. Recombination carried out artificially using modern technology is called recombinant DNA technology (r-DNA technology). It is also known as gene manipulation technique. This technique involves the transfer of DNA coding for a specific gene from one organism into another organism using specific agents like vectors or using instruments like electroporation, gene gun, liposome mediated, chemical mediated transfers and microinjection.

The steps involved in recombinant DNA technology are:

·         Isolation of a DNA fragment containing a gene of interest that needs to be cloned. This is called an insert.

·         Generation of recombinant DNA (rDNA) molecule by insertion of the DNA fragment into a carrier molecule called a vector that can self-replicate within the host cell.

·         Selection of the transformed host cells that is carrying the rDNA and allowing them to multiply thereby multiplying the rDNA molecule. 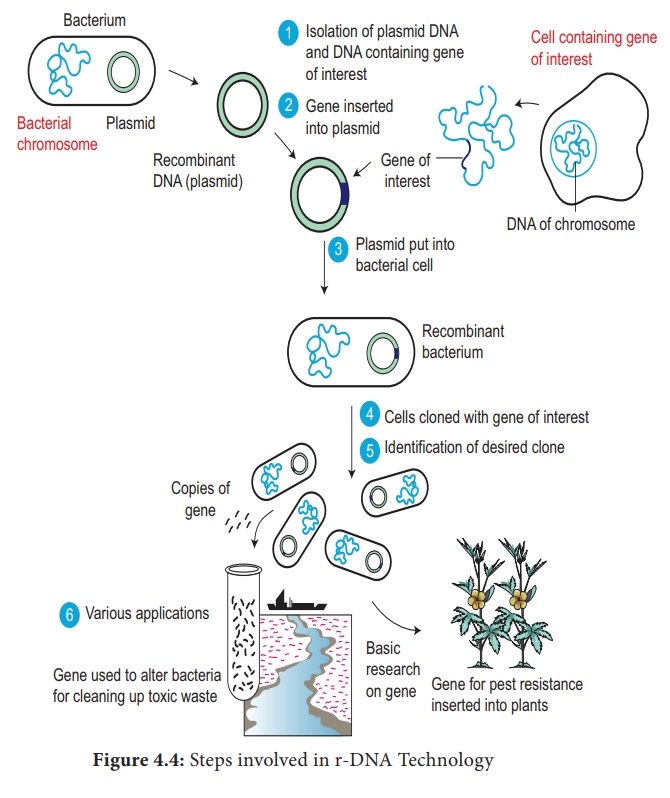