The clinical measurement of the arterial blood pressure 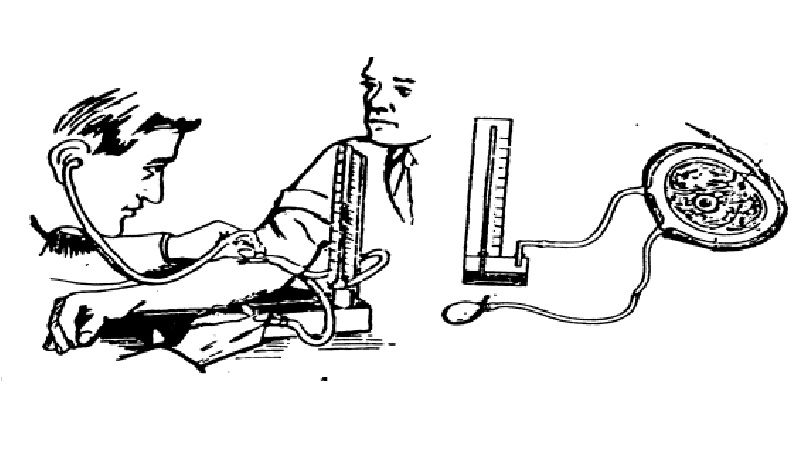 Blood pressure is the pressure exerted by the blood on the wall of an artery. It is measured by the use of sphygmomanometer. - Electro Cardio-Gram (ECG) - electrocardiogram

cardiac output or the amount of blood pumped by the heart,

the peripheral resistance offered by the blood vessels,

the viscosity of the blood and

the fullness of the vascular systems.

The clinical measurement of the arterial blood pressure

The blood pressure is measured by using sphygmomanometer. It consists of a device for applying external pressure which is attached to a mercury manometer. A rubber bag 25cm by 10cm is enclosed in a silk or cotton bag with a long silk cuff which can be tied around the upper arm. The sounds are heard on the brachial artery. The rubber bag is connected by means of rubber tubes to a pump and the mercury manometer.

The pump is used to drive in air to increase the pressure in the bag and compress the brachial artery. The manometer has a scale and a mercury reservoir incorporated within. Air is pumped into the bag and the pressure is raised rapidly well above the systolic level.

The normal values of blood pressure are given as 120mm of mercury which is the systolic reading and 80mm of mercury as the diastolic level.

A recording of the electrical changes that accompany the cardiac cycle is called an electrocardiogram. The instrument used to record the changes is ElectroCardioGraph. The ECG is invaluable in diagnosing abnormal cardiac rhythm and conduction patterns, detecting the presence of foetal life, determining the presence of several foetuses and following the course of recovery from a heart attack.