Twenty different types of α-L-amino acids are commonly found in proteins (Fig. 6.2). Except for proline, which technically is an imino acid, these differ from one another only in the structure of the side group attached to the alpha carbon. A few other types of amino acids are occasionally found in proteins, with most resulting from modification of one of the twenty after the protein has been synthesized. Frequently these modified amino acids are directly involved with chemical reac-tions catalyzed by the protein. Each of the basic twenty must possess unique and invaluable properties since most proteins contain all twenty different amino acids (Table 6.1). 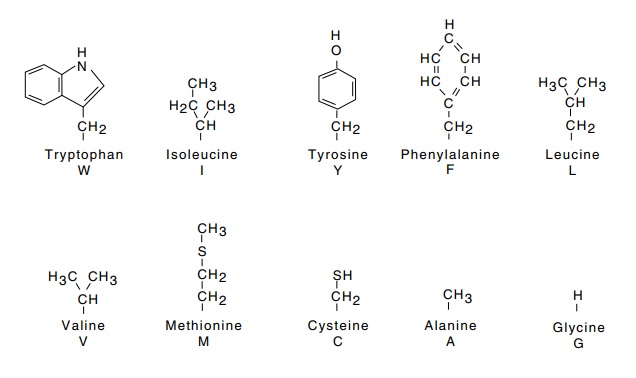 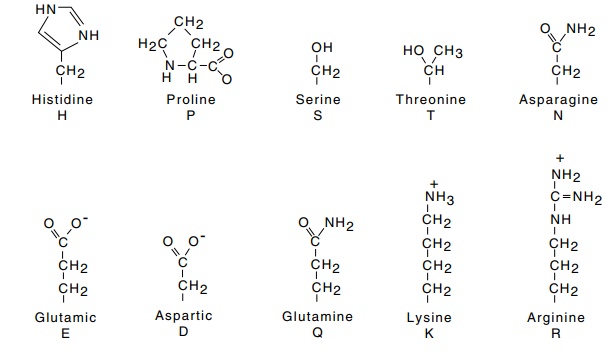 Even though we must understand the individual properties of each of the amino acids, it is convenient to classify the twenty into a smaller number of groups and to understand common properties of the groups. One of the most important such groups is the hydrophobics. The side groups of the aliphatic amino acids are hydrophobic and prefer to exist in a nonaqueous, nonpolar environment like that found in the contact 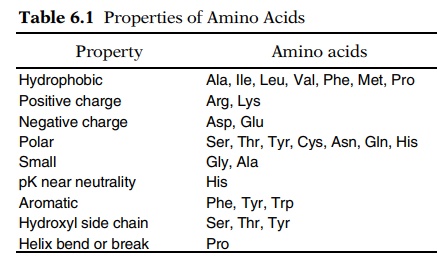 region between two subunits, in the portion of a protein bound to a membrane, or in the interior of a globular protein. A contiguous area of such amino acids on a portion of the surface can make a protein bind

to a similar hydrophobic patch on the surface of another protein, as in the oligomerization of protein subunits, or it can make the protein prefer to bind to or even enter a membrane. Hydrophobic amino acids on the interior of a protein prefer the company of one another to the exclusion of water. This is one of the major forces that maintains the structure of a folded protein.

Cysteine is a notable unique amino acid since in an oxidizing extracel-lular environment, but not in the intracellular environment, two cyste-ine residues in a protein can spontaneously oxidize to form a rather stable disulfide bond (Fig. 6.3). In the isolated protein, this bond can be reduced by the presence of an excess of a reducing reagent to regenerate cysteines.