Less ambitious than calculating the tertiary structure of a protein is predicting its secondary structure.

Several approaches have been used to determine secondary structure prediction rules. At one end is a scheme based on the known conforma-tions assumed by homopolymers and extended by analysis of a small number of known protein structures. The Chou and Fasman approach is in this category. A more general approach is to use information theory to generate a defined algorithm for predicting secondary structure. This overcomes many of the ambiguities of the Chou-Fasman prediction scheme.

Recently, neural networks have been applied to predicting secondary structure. While usually implemented on ordinary computers, these simulate on a crude scale some of the known properties of neural connections in parts of the brain. Depending on the sum of the positive and negative inputs, a neuron either does not fire, or fires and sends activating and inhibiting signals on to the neurons its output is con-nected to

In predicting secondary structure by a neural network, the input is the identity of each amino acid in a stretch of ten to fifteen amino acids (Fig. 6.17). Since each of these can be any of the twenty amino acids, about 200 input lines or “neurons” are on this layer. Each of these activates or inhibits each neuron on a second layer by a strength that is adjusted by training. After summing the positive and negative signals reaching it, a neuron on the second layer either tends to “fire” and sends a strong activating or inhibiting signal on to the third layer, or it tends not to fire. In the case of protein structure prediction, there would be three neurons in the third layer. One corresponds to predicting α-helix, one to β-sheet, and one to random coil. For a given input sequence, the network’s secondary structure prediction for the central amino acid of 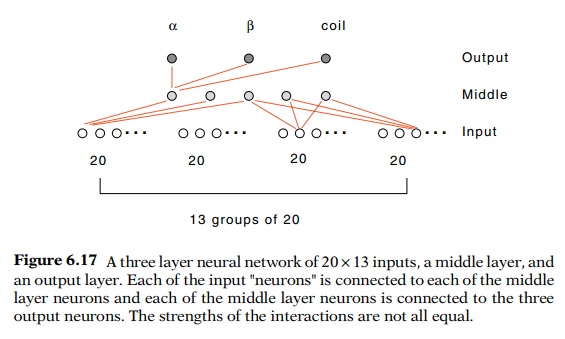 the sequence is considered to correspond to the neuron of the third layer with the highest output value. “Training” such a network is done by presenting various stretches of amino acids whose secondary structure is known and adjusting the strengths of the interactions between neu-rons so that the network predicts the structures correctly.

No matter what scheme is used, the accuracy of the resulting struc-ture prediction rules never exceeds about 65%. Note that a scheme with no predictive powers whatsoever would be correct for about 33% of the amino acids in a protein. The failure of these approaches to do better than 65% means that in some cases, longer-range interactions between amino acids in a protein have a significant effect in determining secon-dary structure (See problem 6.18).