A protein that regulates the expression of a gene most often recognizes and binds to a specific DNA sequence in the vicinity of that gene. Bacteria contain at least several thousand different genes, and most are likely to be regulated.

A protein that regulates the expression of a gene most often recognizes and binds to a specific DNA sequence in the vicinity of that gene. Bacteria contain at least several thousand different genes, and most are likely to be regulated. Eukaryotic cells contain at least 10,000 and perhaps as many as 50,000 different regulated genes. Although combi-natorial tricks could be used to reduce the number of regulatory proteins well below the total number of genes, it seems likely that cells contain at least several thousand different proteins that bind to specific se-quences. What must the structure of a protein be in order that it bind with high specificity to one or a few particular sequences of DNA? Does nature use more than one basic protein structure for binding to DNA sequences?

We discussed the structure of DNA and pointed out that the sequence of DNA can be read by hydrogen bonding to groups within the major groove without melting the DNA’s double-stranded structure. Each of the four base pair combinations, A-T, T-A, G-C, and C-G, 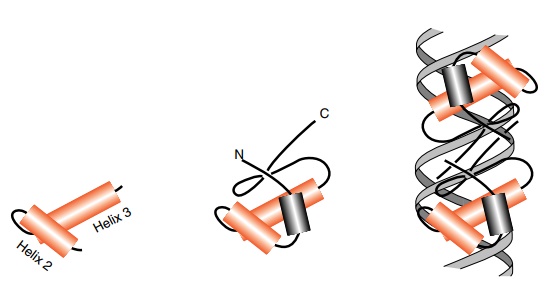 Figure 6.18 Left, a helix-turn-helix. Center, the helix-turn-helix ofcrore-pressor in the context of the remainder of the polypeptide chain. Right, a dimer of cro repressor with the recognition helices fitting into the major groove of the DNA.

generates a unique pattern of hydrogen bond donors and acceptors. Therefore, the identity of a base pair can be read by a single, properly positioned, amino acid. Of course, an amino acid need not be con-strained to bond only to a single base pair or just to the hydrogen bond donors and acceptors in the major groove. Bonding from an amino acid residue is also possible to multiple base pairs, to the deoxyribose rings, or the phosphate groups.

Since the width of the major groove of DNA nicely accepts an alpha-helix, it seems likely that such helices play a major role in DNA-binding proteins, and this has been found. We might also expect proteins to maximize their sequence selectivity by constructing their recognition surfaces to be as rigid as possible. If the surface is held in the correct shape while the protein is free in solution, then none of the protein-DNA binding energy needs to be consumed in freezing the surface in the correct shape. All the interaction energy between the protein and DNA can go into holding the protein on the DNA and none needs to be spent holding the protein in the correct conformation. Further, the DNA-contacting surface must protrude from the protein in order to reach into the major groove of the DNA. These considerations lead to the idea that proteins may utilize special mechanisms to stiffen their DNA-binding domains, and indeed, this expectation is also met.

The high interest and importance in gene regulatory proteins means that a number have been purified and carefully studied. Sequence analysis and structure determination have revealed four main families of DNA-binding domains. These are the helix-turn-helix, zinc domain, leucine zipper, and the beta-ribbon proteins.

The helix-turn-helix domains possess a short loop of four amino acids between the two helical regions (Fig. 6.18). Because the connection between the helices is short and the helices partially lie across one another, they form a rigid structure stabilized by hydrophobic interac-

tions between the helices. For historical reasons the first of these two helices is called Helix 2, and the following helix is called Helix 3. In these proteins Helix 3 lies within the major groove of the DNA, but its orientation within the groove varies from one DNA-binding protein to another. In some, the helix lies rather parallel to the major groove, but in others, the helix sticks more end-on into the groove. The actual positioning of the helix in the groove is determined by contacts between the protein and phosphate groups, sugar groups, and more distal parts of the protein. Contacts between the protein and DNA need not be direct. Trp repressor makes a substantial number of contacts indirectly viawater molecules. Most prokaryotic helix-turn-helix proteins are ho-modimeric, and they therefore bind a repeated sequence. Since the subunits face one another, the repeats are inverted, and form a symmet-rical sequence, for example AAAGGG-CCCTTT. Developmental genes in eukaryotes often are regulated by proteins that are a close relative of the helix-turn-helix protein. These homeodomain proteins possess struc-tures highly similar to the helix-turn-helix structures, but either of the helices may be longer than their prokaryotic analogs. The homeodo-main proteins usually are monomeric and therefore bind to asymmetric sequences. 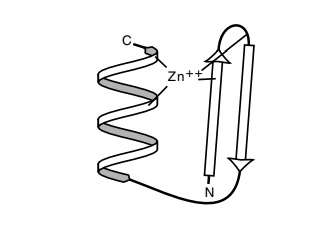 The zinc finger proteins are the most prominent members of the zinc-containing proteins that bind to DNA. The zinc finger is a domain of 25 to 30 amino acids consisting of a 12 residue helix and two beta-ribbons packed against one another. In these proteins, Zn ligands to four amino acids and forms a stiffening cross-bridge. Often the Zn is held by two cysteines at the ends of the ribbons beside the turn, and by two histidines in the alpha-helix. This unit fits into the major groove of the DNA and contacts three base pairs. Usually these Zn-finger proteins 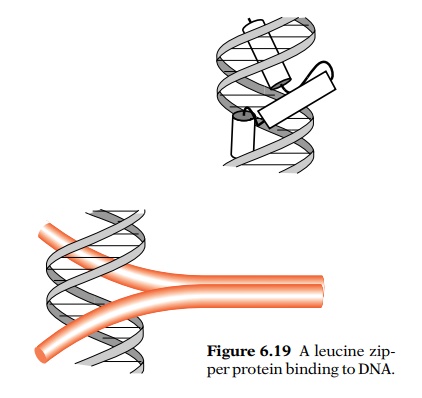 contain multiple fingers, and the next finger can contact the following three base pairs. Other Zn-containing proteins that bind to DNA contain multiple Zn ions in more complex structures. These proteins also use residues in the alpha-helix and at its end to contact the DNA. Zn fingers can also be used to make sequence-specific contacts to RNA.

The leucine zipper proteins are of a particularly simple design. They contain two alpha-helical polypeptides dimerized by hydrophobic faces on each. Characteristically, each polypeptide contains leucine residues seven amino acids apart that form the dimerization faces. Beyond the dimerization domains the helices diverge as in a “Y”, with each arm passing through a major groove (Fig. 6.19). Few leucine zipper proteins have been identified in prokaryotes, but they are common in eukaryotes. They are notable in forming heterodimers. For example, the fos-jun transcription factor is a leucine zipper protein. It is easy to see how specific dimerization could be determined by patterns of positive and negative charges near the contact regions of the two dimerization regions.

The beta-sheet domains contact either the major or minor groove of DNA via two antiparallel beta-strands. A few prokaryotic and eukaryotic examples of these proteins are known, the most notable being the X-ray determined structure of the MetJ repressor-operator complex. At least part of the DNA contacts made by transcription factor TFIID are in the minor groove and are made by such beta-strands.