The existence of the alpha helix was predicted by Pauling and Cory from careful structural studies of amino acids and peptide bonds. 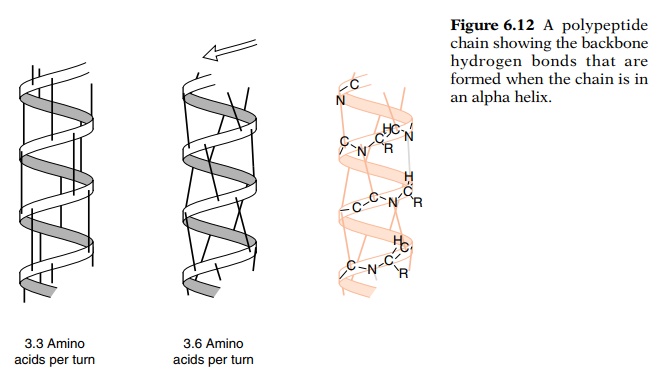 If we look down the axis of an alpha helix, we see the amino acids winding around in a circle. Every third and then every fourth amino acid lies on one side of the helix (Fig. 6.13). This pattern follows from the fact that the alpha helix is nearly 3.5 amino acids per turn. If every third and then every fourth amino acid were hydrophobic, two such helices could bind together through their parallel strips of hydrophobic amino acids. This occurs in structures called coiled coils. These are found in structural proteins like myosin as well as in a class of transcrip-tional regulators that dimerize by these interactions. These activators are called leucine-zipper proteins. They possess leucine residues seven amino acids apart. Strips of hydrophobic amino acids along one face of alpha helices are frequently found in bundles containing two, three, or four alpha helices. 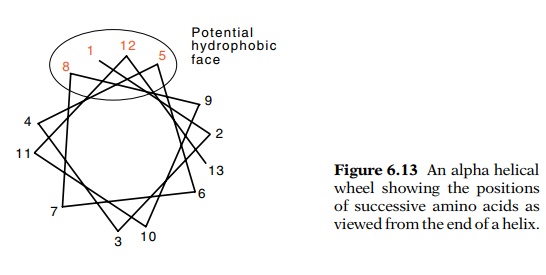 The beta-strand is a second important structural element of proteins. In it the polypeptide chains are quite extended (Fig. 6.14). From a top view the peptide backbone is relatively straight, but in a side view the peptide backbone is pleated. The side chains of the amino acids are relatively unconstrained since alternate groups are directed straight up and straight down. The amide hydrogens and the carboxyl groups are directed to either side and are available for hydrogen bonding to another beta-strand lying alongside to form a beta sheet. This second strand can be oriented either parallel or antiparallel to the first. 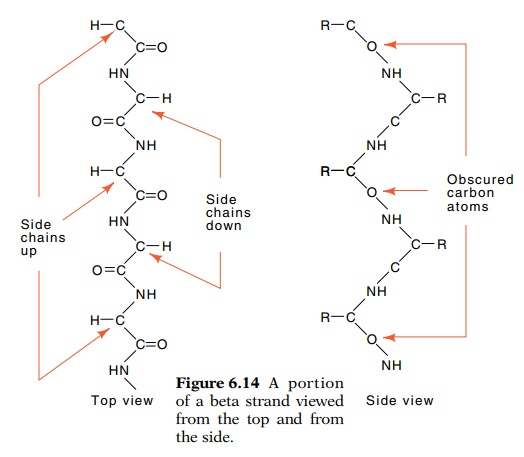 The third readily identified secondary structural element is the re-verse or beta bend (Fig. 6.15). A polypeptide chain must reverse direc-tion many times in a typical globular protein. The beta bend is an energy-effective method of accomplishing this goal. Three amino acids often are involved in a reverse bend.