Given the remarkable diversity of the higher spiny-rayed fishes – approximately 14,800 species in 267 families – itis a tribute to their successful suite of adaptations that theyare generally recognized as a coherent group

Given the remarkable diversity of the higher spiny-rayed fishes – approximately 14,800 species in 267 families – itis a tribute to their successful suite of adaptations that they are generally recognized as a coherent group (Fig. 15.2). Although controversy about relationships and taxonomic position among the various orders and families abounds,certain generalities can be made about the group as a wholeand the characteristics that define it. Two primary innovations are shared by most lineages of acanthopterygians: 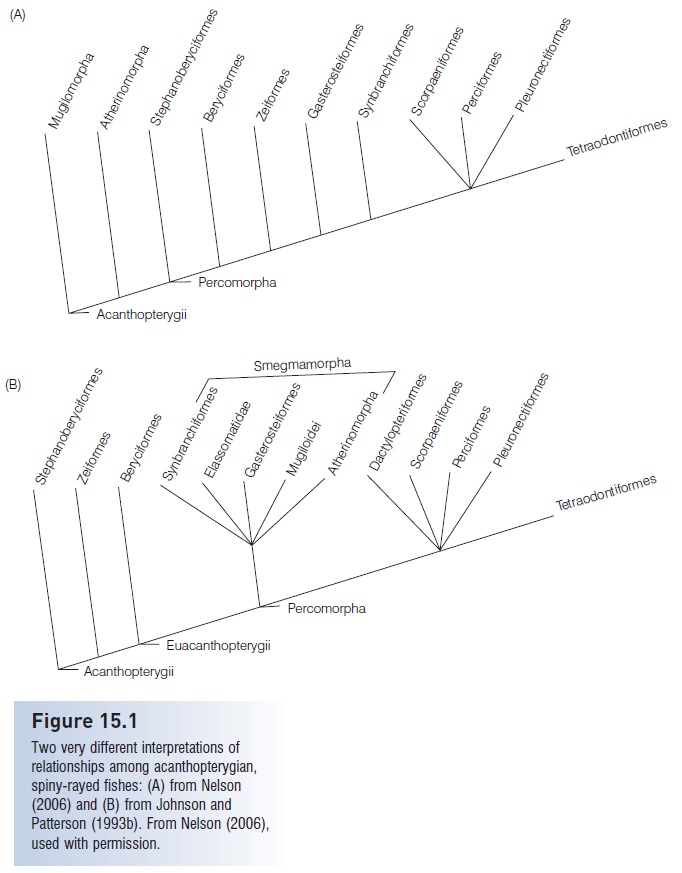 Two very different interpretations of relationships among acanthopterygian,spiny-rayed fishes: (A) from Nelson(2006) and (B) from Johnson andPatterson (1993b). From Nelson (2006),used with permission

1 Upper jaw mobility and protrusibility are maximal inthis group. This is achieved by the development of adorsal extension of the anterior tip of the premaxilla,termed the ascending process. This process slidesalong the rostral cartilage on the snout of the fish,shooting the upper jaw forward and downward.Protrusion is aided by a camlike connection betweenthe maxilla and premaxilla, the maxilla rotating andhelping push the premaxilla forward (Lauder & Liem1983;  Division Teleostei).

2 Pharyngeal dentition and action reach their highest level of development. Improved function is aided by are distribution of the attachments of muscles and bones in the pharyngeal apparatus. The retractor dorsalismuscle  now inserts on the third pharyngo branchial arch, and the upperpharyngeal jaws are supported principally by the second and third epibranchial bones. 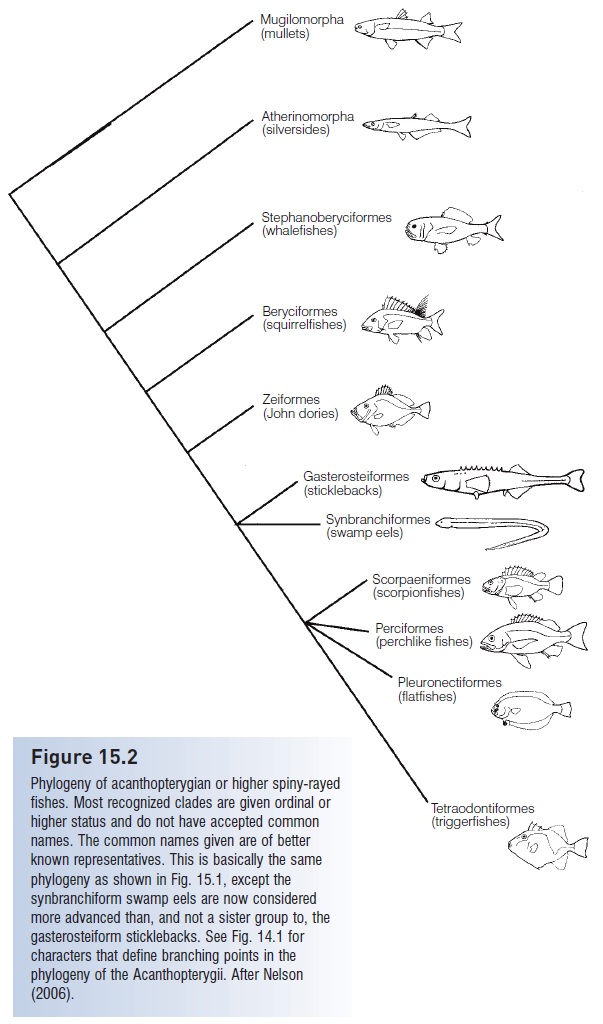 Phylogeny of acanthopterygian or higher spiny-rayedfishes. Most recognized clades are given ordinal orhigher status and do not have accepted commonnames. The common names given are of betterknown representatives. This is basically the samephylogeny as shown in Fig. 15.1, except thesynbranchiform swamp eels are now consideredmore advanced than, and not a sister group to, the gasterosteiform sticklebacks. See Fig. 14.1 forcharacters that define branching points in thephylogeny of the Acanthopterygii. After Nelson(2006).

Acanthopterygians also typically have: ctenoid scales(with numerous exceptions); a physoclistous gas bladder;maxilla excluded from the gape; two distinct dorsal fins,the first of which is spiny and the second of which is softrayed;pelvic and anal fins with spines; pelvic fins located anteriorly, containing one leading spine and five or fewer soft rays, and pectoral fins placed laterally on the body; andan externally symmetrical tail fin supported by fused basal elements. A number of other trends in feeding, locomotion,and predator protection characterize the higher spiny-rayedfishes and show progressive change during acanthopterygianphylogeny. An important point to be remembered is that these are the most advanced and diverse of today’s fishes, dominatingthe shallow, productive habitats of the marine and many lake environments.