The pinnacle of teleostean evolution is reached among the highly derived fishes of the order Tetraodontiformes.

The pinnacle of teleostean evolution is reached among the highly derived fishes of the order Tetraodontiformes. The name refers to the common pattern of four teeth in the outer jaws of puffers (an alternative name, Plectognathimeans twisted jaw). Tetraodontiforms are characterized bya high degree of fusion or loss of numerous bones in both the head and body. In the head region, such bones as the parietals, nasal, infraorbital, and posttemporal are commonly missing, both hyomandibular and palatine bonesmay be fi rmly attached to the skull, and the maxilla is fusedto the premaxilla. The pelvic fins and lower vertebral ribsare often missing and the vertebral number is reduced from the common acanthopterygian condition of 26 to as littleas 16. The skin has a thick, leathery feel and is covered by scales that are modified into spines, bony plates, or ossicles, some of rather spectacular proportions. Tetraodontiformstend to eat animals that are generally unavailable to most other reef fishes, such as sponges, sea urchins, hard corals,and jellyfishes. Some are predators on sessile benthic invertebrates(triggerfishes, puffers), others are water column swimmers above the reef that feed on zooplankton (Black Durgon Triggerfish), and some are large, offshore planktivorousspecies (Gray Triggerfish; Fig. 15.28A) or jellyfish feeders (Ocean Sunfish). All but 20 species are marine.Even though tetraodontiforms are recognized as the most 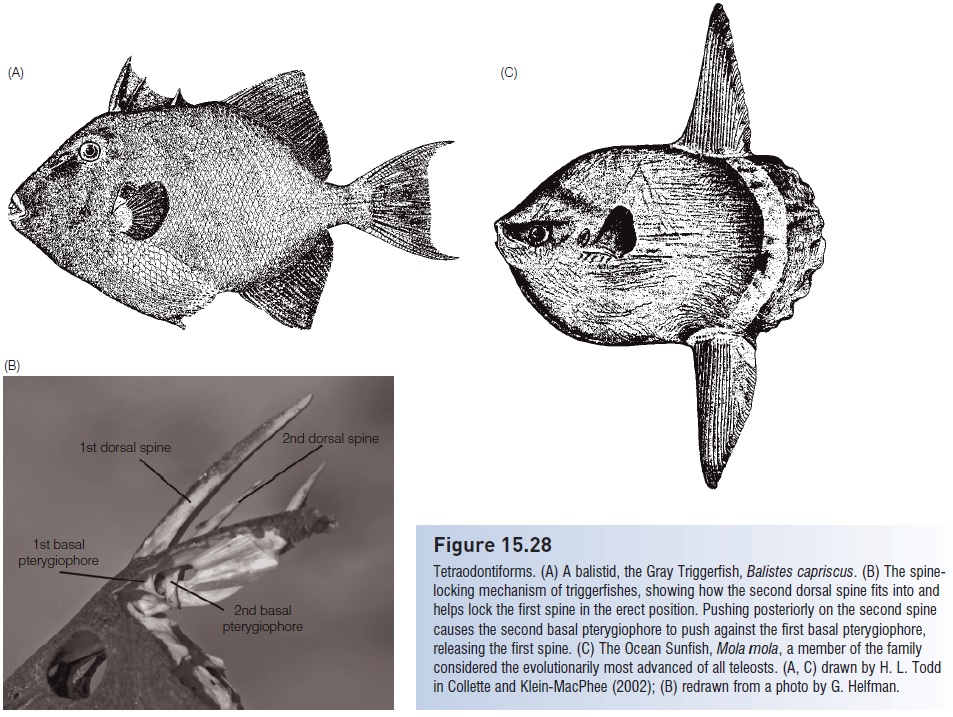 Tetraodontiforms. (A) A balistid, the Gray Triggerfish, Balistes capriscus. (B) The spinelockingmechanism of triggerfishes, showing how the second dorsal spine fits into andhelps lock the first spine in the erect position. Pushing posteriorly on the second spine causes the second basal pterygiophore to push against the first basal pterygiophore,releasing the first spine. (C) The Ocean Sunfish, Mola mola, a member of the familyconsidered the evolutionarily most advanced of all teleosts. (A, C) drawn by H. L. Toddin Collette and Klein-MacPhee (2002); (B) redrawn from a photo by G. Helfman.

advanced of the teleosts, the fossil record for the group goes back at least to the Early Eocene and quite likely theLate Cretaceous, once again pointing out that modern bonyfishes have a long evolutionary history.

The super family of leather jackets (Balistoidea) containsthe triggerfishes (Balistidae) and the filefishes (Monacanthidae).In many species, the first dorsal spine is particularly long and stout and can be locked in the erect position viaan interaction with the second spine (Fig. 15.28B). The base of the smaller second spine protrudes forward and fits into a groove on the posterior edge of the first spine,locking the first spine into position. Depressing the second spine releases the lock, hence the name triggerfish. Sound production in this group is common, produced by grinding of the teeth or vibration of the gas bladder via the pectoral spine; the legendary Hawaiian name for the triggerfishes Rhinecanthus aculeatus and R. rectangulus is humuhumunukunuku apua’a, which means “the fish that sews with aneedle and grunts like a pig”. These fishes can also rotate their two eyes independently. In theostraciid boxfishes, theentire body except the fins and caudal peduncle are encasedin a bony box, which is triangular or rectangular in cross section. Stout spines sometimes protrudeanteriorly just above the eyes and posteriorly just ahead of the anal fin.Swimming is accomplished via undulations of median fins(see  Locomotory types).

The suborder Tetraodontoidei contains the puffers and ocean sunfishes. Ironically, and despite family names focused on dentition, these fishes lack true teeth. Instead the jaw bone itself has a cutting edge that differentiates intoseparated teeth or is fused as a parrotlike beak. Puffers areable to inflate their body by filling the stomach with water. Three families of puffers are generally recognizedbased on the number of tooth like structures in each jaw: a single three-toothed species (Triodontidae), the smooth and sharp nose puffers with four teeth (Tetraodontidae),and the spiny puffers, burrfishes, and porcupine fishes with two fused teeth (Diodontidae). Tetraodontidshave prickly skin. Because of bone loss and fusion, tetraodontidsproduce tasty, boneless fillets, but many speciesconcentrate a powerful toxin, tetraodotoxin, in their viscera which can cause death in humans. Specially licensed andsupervised Fugu restaurants in Japan serve the meat of puffers of the genus Takifugu, which contains small amounts of the toxin and provides a narcotic high. Despite such chemical protection, puffer fishes are commonly eaten by sea snakes. The few freshwater members in the order aretetraodontids. Diodontids have spines of varying length that are erected when the fish inflates, creating a large,round, and essentially inedible pincushion.

Interestingly, molas have a large number of cartilaginouselements or cartilage-lined bones in their skull and in their fin supports (Tyler 1980). It is somewhat ironic that such a highly derived group returns anatomically to a startingpoint in fish evolution, as represented by primitive hagfishes, lampreys, sharks, and chondrosteans with their cartilaginous skeletons. Molas can therefore serve to remindus of several important aspects of the evolutionary process and our attempts to understand it. The task of determining primitive versus advanced traits can be complicated by secondarilyderived characteristics, such as a very advancedspecies with a gular bone (e.g., the luciocephalid pikehead)or with a cartilaginous skeleton (see also the account above for the icosteid ragfish). And also important is that phylogenetically primitive fishes are not necessarily poorlyadapted or somehow inferior to more advanced groups; themola’s rediscovery of the utility of cartilage underscores the observation that all living fishes are the successful result of the trial and error processes of mutation and natural selection.