Gobioids are usually small, benthic or sand-burrowing fishes, mostly marine but about 10% inhabit fresh water. Gobioids, as is common among benthic fishes, lack a gas bladder. Different families show differing degrees of fusion of the pelvic fin. Two families, the sleepers and gobies, account for 95% of the species in the suborder, the latter family being by far the largest. In the stream-dwelling rhyacichthyid loach gobies of Indo-Australia, the flattened anterior third of the body in combination with the pelvicfins form a sucking disk for holding position in fast-flowingwater. The eleotrid sleepers are small to medium (to 60 cm),widely distributed estuarine and stream fishes of tropical and subtropical regions. They are often the major predators of stream systems on oceanic islands such as Hawaii and New Zealand and have a complex life history that includes a marine planktonic larva, reflecting a probable marineancestry for the family. Pelvic fins are usually separated.Elongate kraemeriid sand gobies often rest in sand with just the head exposed, frequently in wave-tossed areas. 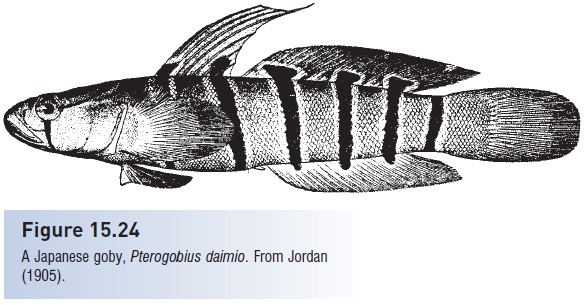 The gobiid gobies (Fig. 15.24) constitute the largest family of marine fishes in the world, with more than 1950 species (the distinction of largest fish family overall is contested among gobies, cyprinids, and cichlids, all with around 2000 species). Gobies usually have their pelvic fins united,some species using them as a suction disk for clinging to hard substrates. Many species live on mud or sand or inassociation with invertebrates such as sponges, sea urchins,hard and soft corals, and shrimps (see  Inter specific relations: symbioses). The Neon Goby, Gobiosomaoceanops, is an important cleaner fish in the Caribbean and is convergent in coloration with labrid cleanerfishes of the tropical Pacific. Other derivative species include the essentially amphibious mudskippers (Periophthalmus,Boleophthalmus);these are so successful out of water that they are some times referred to as land gobies. Gobies are generally small (<10 cm) and some are among the world’s smallest fishes. Diminutive species include an Indian Ocean species,Trimmatom nanus, which matures at 8–10 mm, and several species in the genera Eviota, Mistichthys, and Pandaka that mature at about 10 mm. The largest goby is a western Atlantic/Caribbean form, the Violet Goby, Gobioides broussenetti, a purplish eel-like fish about 50 cm long with elongated orsal and anal fins. Although predominantly marine,some of the freshwater species are important members of island stream assemblages, including species capable of ascending waterfalls and occupying head water regions far from the ocean (e.g., Hawaiian Lentipes). Goby systematists include among their ranks the Emperor of Japan (e.g.,Akihito 1986).

The remaining gobioids are mostly small, eel-like, tropical marine fishes that live on or in sand. The microdesmid wormfishes are similar to kraemeriids, burrowing in sand and mud. The related, spectacularly colored ptereleotrids are also known as hover gobies, dartfishes, or fi refishes,names which describe their coloration and their habit of hovering above the bottom and diving rapidly into a burrow when disturbed. The schindleriid infantfishes are an enigmatic family of three species of small (2 cm) pelagic fishesthat are neotenic or paedomorphic, which means that theyare essentially adults that retain larval traits or larvae thathave developed functional gonads. Retained larval characteristics in schindleriids include a larval-type kidney (pronephros),lack of pigmentation, and unossified skeleton.The extremely small size of many gobioids may represent convergent neotenic pathways (Johnson & Brothers 1993). Many fish families contain species that have evolved through hetero chronic alterations in developmental sequences; an example analogousto schindleriids involves nettastomatid duckbill eels, inwhich the leptocephalus larvae possess developed ovaries(Castle 1978).