Although some of the 16 remaining perciform suborderscontain very speciose families (e.g., blennies, gobies), by far the numerically most successful suborder is the Labroidei.

Although some of the 16 remaining perciform suborderscontain very speciose families (e.g., blennies, gobies), by far the numerically most successful suborder is the Labroidei. Labroids are predominantly tropical, marine fishes (e.g.,damselfishes, wrasses, parrotfishes), with a few species in the first two families inhabiting warm temperate waters.Two additional families, the surfperches and odacids, aretemperate and marine. The most successful family in thesuborder is the tropical freshwater cichlids, although no single biological generality applies to all members of this fantastically speciose and varied family of fishes. The six families are united primarily on the basis of pharyngeal jawmorphology, involving features of both the upper and lower jaws. Pharyngeal adaptations for handling a diversity of prey types have contributed substantially to the success of

Cichlids (initial “ci” sounded as in “popsicle”) are viewedas the basal group of the suborder. Among the more than 1350 cichlid species are many aquarium fishes that have achieved popularity because of their small size, colorfulness,and willingness to behave and breed within the confines of an aquarium. Familiar South American speciesinclude freshwater angelfishes (Pterophyllum), discus (Sym-physodon), oscars (Astronotus), convict cichlids (Archocentrus),Peacock Bass (Cichla), and gravel-eaters (Geophagus).One species, the Rio Grande Cichlid, Cichlasoma cyanoguttatum, gets as far north as Texas and is known to haveinvaded Lake Pontchartrain, Louisiana. Numerous cichlids,particularly African tilapias, have been deliberately or accidentally introduced in Florida, California, and Hawaii, chiefly for aquaculture purposes. Although diverse in the New World (c. 400 species), the great majority of cichlidsoccur in Africa, where they have radiated explosively intonumerous species flocks. Old World cichlids include fishes in the

Most cichlids build nests and many African forms brood the eggs and young in the mouth of either the male or more usually the female. A few species occur in Israel and Iran and also in India and Sri Lanka,where they commonly inhabit estuaries (e.g., Etroplus). Cichlids are convergent in behavior, morphology, and ecology with centrarchid sunfishes. The two families can be distinguished by two nostrils on each side of the head and a continuous lateral line in sunfishes, whereas cichlids haveonly one nostril on each side and an interrupted lateral line(Fryer & Iles 1972; Keenleyside 1991; Lévêque 1997;Barlow 2000; Kullander 2003; and many others; see www.cichlidpress.com for spectacular photos and additional references).

The embiotocid surfperches look very much like some of the larger, deep-bodied cichlids. However, they are anentirely (with one exception) marine family of small tomedium, inshore fishes that occur most commonly aroundkelp beds, rocky reefs, surf zones, and tidepools. Twenty of the 23 species occur along the Pacific coast of North America, the other three living in Korea and Japan. They are the only labroids that are live-bearers, the female giving birth to fully developed, large young. In a few species,males are even born reproductively mature (see Fertilization). Trophically, some are specialized as zooplanktivores,whereas most pick invertebrates from the bottom or off plants. The pomacentrid damselfishesare generally smaller, more colorful, tropical marine equivalents of the surfperches (Fig. 15.18A).

This aquarium at the Georgia Aquarium is not unrepresentative of a scene over a rocky area of Lake Malawi where there has been an explosivespeciation among cichlids. To view some of the spectacular body shape and color variation among African cichlids,

Variation in morphology of an ancient species flock. (A) Acompletely reconstructed individual of the Jurassic neopterygian Semionotus. (B) Variation in body form of species related to Semionotus that probably co-occurred in a single lake. From McCune (1990), used with permission.

Many damselfishes are herbivorous (e.g., Stegastes spp.), whereas others are zooplanktivorous and show the usual adaptations associated with life in the water column above structure,namely a fusiform body, forked tail, and highly protrusible mouth (e.g., Chromis spp.). Herbivorous damselfishes are typically territorial, guarding a small patch ofreef substrate in which they feed, hide, and in the case of males, court females and guard developing eggs. No posthatchingcare of young is shown except in one Indo-Pacific species, Acanthochromis polyacanthus. Some species are intimately associated with invertebrates, such as the anemonefishes (Amphiprion, Premnas) (see  Interspecific relations: symbio ses). This is a tropical family containing 315 species that reaches its highest diversity inthe Indo-Pacific region, with a few species in each oceanbasin occurring in warm temperate waters (e.g., in California,the Blacksmith, Chromis punctipinnis, and the statemarine fish, the Garibaldi, Hypsypops rubicundus) (Emery& Thresher 1980; Allen 1991; see also papers in Allen etal. 2006) (Fig.15.19). 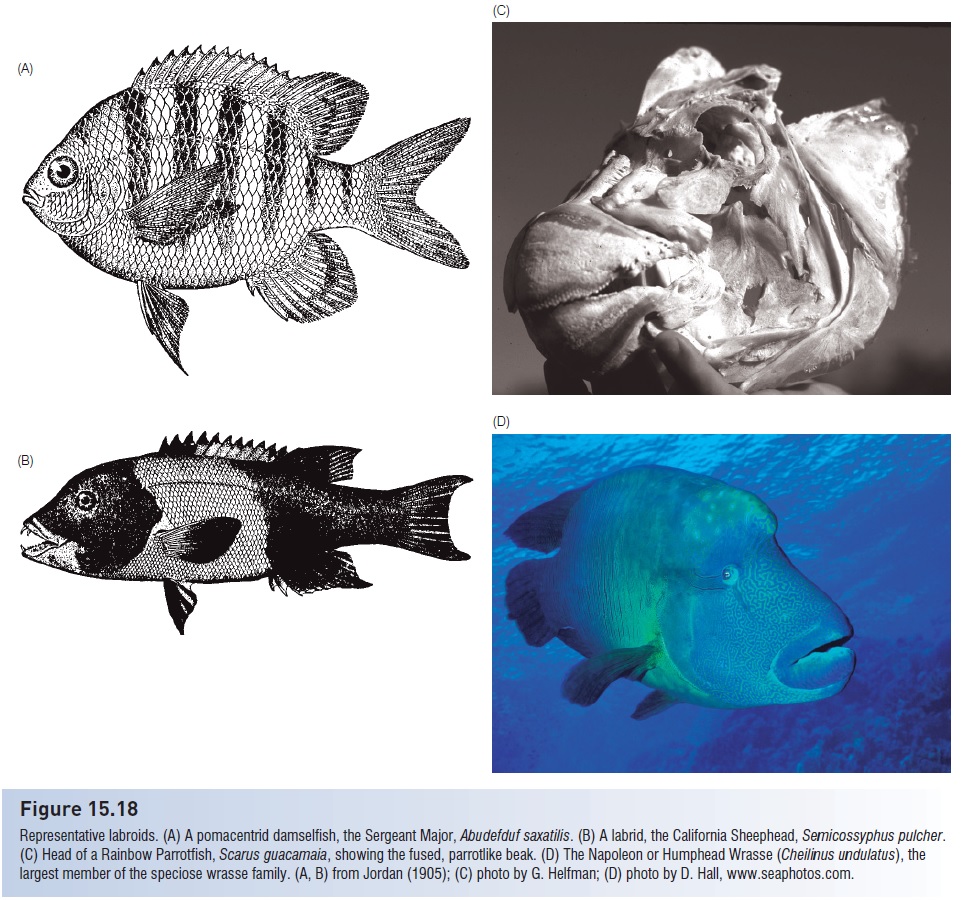 Representative labroids. (A) A pomacentrid damselfish, the Sergeant Major, Abudefduf saxatilis. (B) A labrid, the California Sheephead, Semicossyphus pulcher.(C) Head of a Rainbow Parrotfish, Scarus guacamaia, showing the fused, parrotlike beak. (D) The Napoleon or Humphead Wrasse (Cheilinus undulatus), thelargest member of the speciose wrasse family. (A, B) from Jordan (1905); (C) photo by G. Helfman; (D)

The next three families are closely related. The largest family is the wrasses, Labridae, a remarkably diverse and wide spread marine taxon of at least 450 species that occurs in all tropical seas. Many temperate and even cooltemperate members occur in both the Pacific and Atlantic oceans, such as the eastern Pacific California Sheephead(Fig. 15.18B) and Senorita (Semicossyphus, Oxyjulis), the western Atlantic Tautog and Cunner (Tautoga, Tautogolabrus),and several eastern Atlantic wrasses (Labrus spp.).Wrasses range in size from 5 cm (many species) to the Giant Humphead (or Maori or Napoleon) Wrasse of theIndo-Pacific, Cheilinus undulatus, which can be 2.3 m long, weigh 200 kg, and has the unlikely diet of cowries and crown-of-thorns starfish (Fig. 15.18D). It is depletedal most ever where it is found and many Pacific island nations now outlaw its export and even capture (Sadovyet al. 2003). Pharyngeal jaws are especially diversified among labrids, several species able to handle well-protectedprey such as crabs, mollusks, and echinoderms. Labrids typically bounce along in the water column usinglabriform locomotion, a paddling motion of their pectoralfins, stopping momentarily above the bottom to captureprey with protractile jaws and stout teeth, picking zooplanktersout of the water column, or removing external parasites from other fishes (see  Locomotorytypes). The razorfishes (Hemipteronotus, Xyrichtys) are very compressed and escape disturbances by diving rapidly into bottom sediments. Wrasses as a group are stronglydiurnal and enter sandy bottoms or reef crevices at night to sleep. Many wrasses change sex, most starting off life as females and later changing to very differently colored and shaped males (see  Gender roles in fishes).

The odacids are a small family of 12 species limited to the temperate waters of New Zealand and southern Australia.They are intermediate in appearance between wrasses and parrotfishes, having the elongate wrasse body form but the non-protractile jaws and fused teeth of parrotfishes. The scarid parrotfishes include 88 species of tropical marinefishes best known for their fused teeth that form a parrotlikebeak (Fig. 15.18C). The beak is used for biting off algalfronds or pieces of dead coral or scraping the surface of live coral, which is then passed to massive pharyngeal millsfor grinding and extracting algal cells from the coral matrix.As with wrasses, parrotfishes generally change color and sex, from initial phase females to terminal phase males. Parrotfishes are generally larger than wrasses, with some species such as the blue and rainbow parrotfishes of the Atlantic (Scarus spp.) and the bump head parrotfish of thePacific (Bulbometopon) attaining a meter in length. These spectacular, large species are becoming rare due to overfishing and are seldom seen outside of protected areas (Dulvy& Polunin 2004).

The Garibaldi, Hypsypops rubicundus, a temperate pomacentriddamselfish common in kelp beds of southern California, It really is that orange.