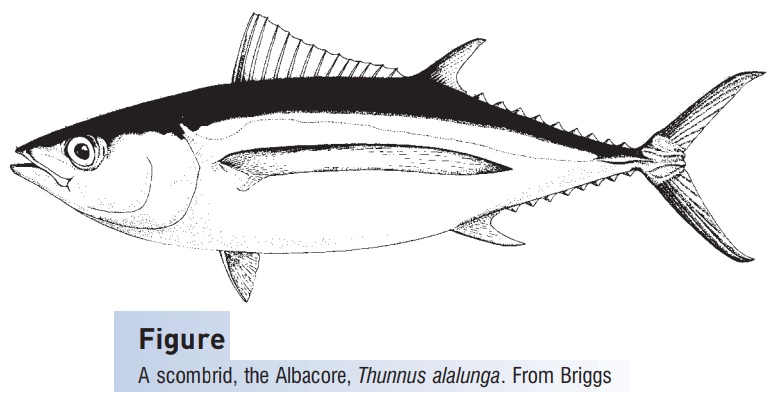 Scombroids (Orrell et al. 2006) include some of the largest and most economically valuable predators in the sea,namely the tunas.

Scombroids (Orrell et al. 2006) include some of the largest and most economically valuable predators in the sea, namely the tunas. The suborder is characterized by a nonprotractile mouth in more advanced groups, a secondary modification given the general trend in teleosts towards increasing protrusibility. Several families have independently evolved some form of endothermy and heat conservation(see  Heterothermic fishes; The open sea).

The monotypic Scombrolabrax heterolepis (Scombrolabracidae)is a peculiar 30 cm long deep water oceanicfish with a protractile jaw and a unique gas bladder arrangement that includes numerous bubble like projections that fit into depressions of expanded vertebral accessories.The gempylid snake mackerels include 24 species of pelagic and deep water predators characterized by an elongate body, large mouth with long teeth, a long spinydorsal fin, and a series of dorsal and ventral finlets just a head of the tail. The family includes the cosmopolitan Oilfish, Ruvettus pretiosus, a large (1.8 m, 45 kg) predator of moderate depths. It is sometimes referred to as the castor-oil fish because of the purgative quality of its meat.

The scombrid mackerels and tunas are highly adapted for a mobile, open sea existence in terms of anatomy, physiology, and behavior (Fig. 15.25;  Theopen sea). Primitive members of the group, such as themackerels and Spanish mackerels and relatives (Scomber, Scomberomorus, and the wahoo, Acanthocybium) tend to live closer to shore, whereas advanced members are highly pelagic and nomadic. Although chiefl y a tropical and subtropical family, several species move into cold waters for feeding. Sizes range from relatively small, 50 cm mackerels(Scomber, Auxis) to the giant Bluefin Tuna, Thunnusthynnus, at >3 m and 650 kg. Most are schooling fishes of tremendous commercial importance (e.g., Sharp & Dizon1978). Several tuna species are overfished, especially the three bluefin species (Bluefin, T. thynnus; Pacific Bluefin, T.orientalis, and Southern Bluefin, T. maccoyii), which have been depleted throughout their ranges because of their extreme economic value (Collette 1999; Maggio 2000;Safina 2001b). In 2001, a single 200 kg Bluefin Tuna caught off northern Japan sold at the Tsukiji Central Fish Marketin Tokyo for US$173,600 (=$860/kg or $390/lb) (AssociatedPress 2001).

A scombrid, the Albacore, Thunnus alalunga. From Briggs(1974), used with permission of McGraw-Hill, Inc.