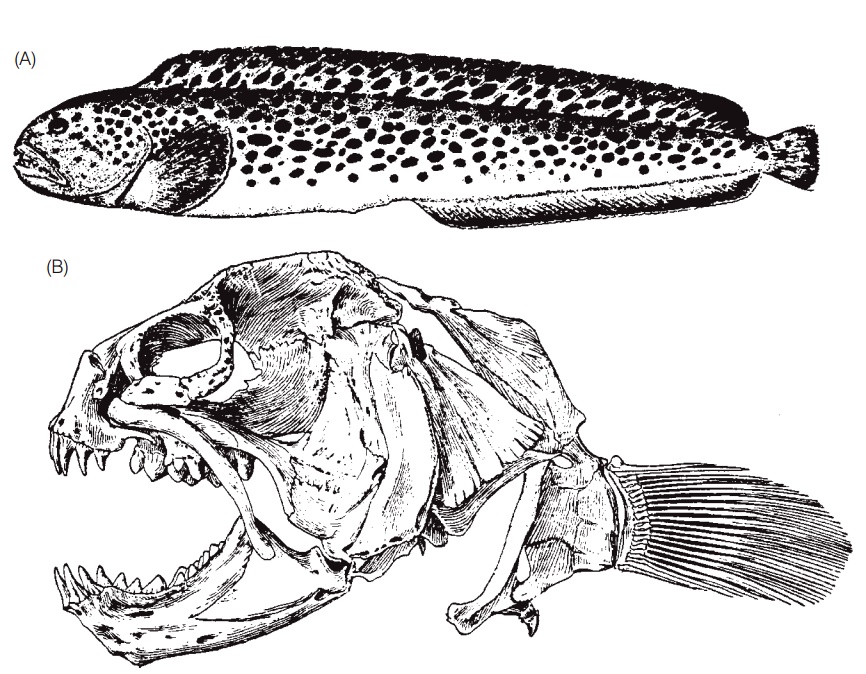 The zoarcoids as a group are generally elongate fishes of the North Pacific that occupy benthic habitats ranging fromtidepools to abyssal depths. The zoarcid eel-pouts are eellikefishes with round heads, long dorsal and anal fins, and pointed tails. Some eel pouts give birth to live young aftereggs develop internally, a condition referred to as ovoviviparity(see  Embryology). Zoarcids inhabit soft bottoms at moderate to great depths (20–3000 m). Mostspecies occur in the North Pacific, some in the North Atlantic,in deep tropical regions of both oceans, and about 10%of the 230 species occur in the southern oceans near Antarctica.In contrast, the stichaeidprickle backs and pholid gunnels are most common in intertidal and shallow, nearshore habitats, primarily in North Pacific waters. Members of both families are primarily micro carnivores, although two prickle backs, Cebidicthys violaceus and Xiphistermucosus, are herbivorous year-round, an uncommon trait at high latitudes for any fishes (Horn 1989). The anarhicadid wolffishes or wolf-eels are the anatomical and ecological equivalents of moray eels at high latitudes (Fig. 15.20).Attaining lengths of 2.5 m and weighing 45 kg, these large benthic predators of the North Pacific and Atlantic often live under rocks and have large anterior conical canines and massive lateral and palatine molars for catching and crushing crustaceans, clams, sea urchins, and fishes.

Zoarchoids. (A) A zoarcoid Atlantic wolffish, Anarhichas lupus. (B) A skull of the related Pacific Wolf-eel, Anarrhichthys ocellatus, showing the massive,diversified dentition of these predators (see also Fig.8.8).