Structure of the Eye 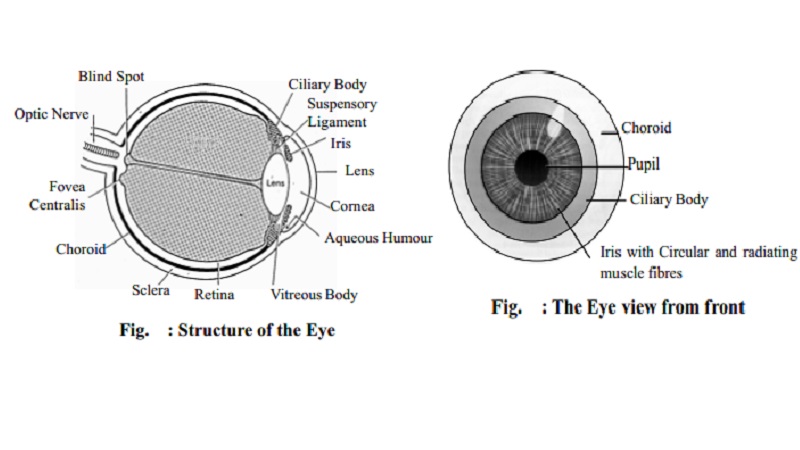 There are 3 layers of tissue in the wall of the eye. They are: The outer fibrous layer : sclera & cornea The middle vascular layer : choroid, ciliary body and iris. The inner nervous tissue layer : retina.

Structure of the eye

The eye is the organ of the sense of sight situated in the orbital cavity. It is almost spherical in shape and is about 2.5 cm in diameter. It is possible to see with only one eye but three - dimensional vision is impaired when only one eye is used. There are 3 layers of tissue in the wall of the eye.

Structures inside the eye ball are the lens, aqueous fluid (humour) and vitreous body. 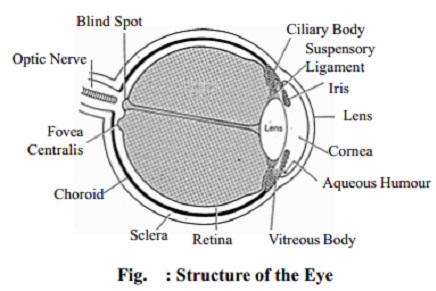 The choroid is the middle layer and rich in blood vessels and is a deep chocolate brown in colour.

Contraction and relaxation of the ciliary muscle changes the thickness of the lens which refracts light rays entering the eye to focus them on the retina. The epithelial cells secrete aqueous fluid into the anterior segment of the eye. i.e. the space between the lens and the cornea.

The iris extends anteriorly from the ciliary body and lies behind the cornea and in front of the lens. It is a circular body composed of pigment cells that gives the eye its black, brown, grey or green colour. In the centre there is an opening called the pupil.

The lens is a highly elastic, circular, biconvex, transparent body, lying immediately behind the pupil. The thickness of the lens is controlled by the ciliary muscle through the suspensory ligament. It is enclosed within a transparent capsule.

The retina is the innermost layer of the wall of the eye. It is extremely delicate. It is composed of several layers of nerve cells and nerve fibres. The retina has a layer highly sensitive to light, containing cells called rods and cones.

The rods and cones contain photosensitive pigments that convert light rays into nerve impulses. The rods are for light vision. The cones are for colour vision.

The rods contain rhodopsin (visual purple) a pigment which is bleached in dim light. Vitamin A is needed for its synthesis.

Near the centre of the posterior part there is an area which appears yellow in colour called macula lutea. In the centre of this area there is a little depression called fovea centralis which consists of only cone-shaped cells.

Chambers of the eye

In the anterior segment of the eye, the space between the cornea and the lens is incompletely divided into anterior and posterior chambers by the iris. Both chambers contain a clear aqueous fluid (humour) secreted into the chambers by the ciliary glands.

Behind the lens and filling the cavity of the eyeball is the vitreous body (humour). This is a soft, colourless, transparent, jelly-like substance composed of 99% water and some salts.

The fluid in both the chambers help to maintain the shape of the eyeball.