Structure and Functions of the Skin 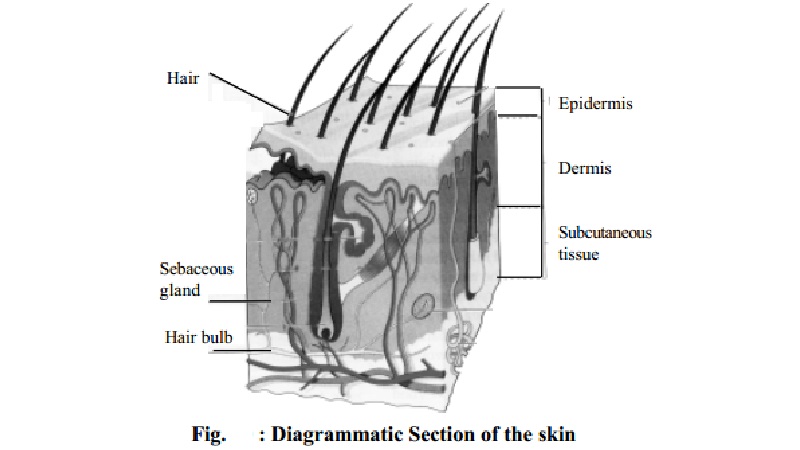 The skin forms a protective outer covering around the entire body. It consists of an outer thin layer called the epidermis and an inner thick layer called the dermis. Numerous structures such as glands, sense organs and appendages such as hair nails are embedded in the skin.

Structure and Functions of the Skin

The skin forms a protective outer covering around the entire body. It consists of an outer thin layer called the epidermis and an inner thick layer called the dermis. Numerous structures such as glands, sense organs and appendages such as hair nails are embedded in the skin.

The Epidermis consists of four layers of cells. They are:

The cells in this layer are thin, scale-like, dead, and cornified. The corneous layer is thickened in those parts of the body such as the palm and sole of the foot.

This is a thin more or less transparent layer, in which the cells are indistinct.

It consists of three to five layers of flattened cells containing dark granules of irregular shape.

This layer is the lowermost and broadest layer of the epidermis. It is capable of active multiplication. This layer is made up of polyhedral cells. These cells are called prickle cells. The innermost cells of this layer contains pigment granules called melanin which give the skin its colour.

Situated below the epidermis is the most thicker dermis formed mostly of connective tissue which is richly supplied with blood vessels and nerves. The boundary line between the dermis and epidermis is neither smooth nor straight; it is rather zigzag because of the conical projection of the dermis into the epidermis. These projections are called dermal papillae. This layer is tough, flexible and highly elastic. It contains the following structures:

Involuntary muscle fibres. These muscle fibres, called arrectores pilorum are attached to the hair follicle and when these muscles contract, the hairs become vertical and 'goose - skin' is brought about.

There are two sets of glands in the skin. They are (1) the sweat glands and (2) the sebaceous glands. Each sweat gland consists of a long tube which at one end opens on to the surface through the sweat pore. At the other end, in the deeper part of the dermis, the tube forms a coiled mass with a blind end. In the coiled portion of the sweat gland, there are glandular cells, which separate water and small quantities of metabolic waste products from the blood that circulates through the capillary network associated with the gland. The sweat passes through the sweat pore and evaporates from the surface by taking heat from the skin. The sweat glands are present in large amounts on the palms, soles, forehead and in the armpits.

The sebaceous glands are irregularly shaped sac - like glands that open into the hair follicles. The oily secretions (Sebum) of these glands make the hair waterproof and protect the skin from drying effects of the atmosphere due to high temperatures and low humidity.

Numerous sensory nerves specialized to pick up stimuli that cause sensations of touch, pressure, pain, heat and cold that are scattered in the skin. They are connected to the brain by nerve fibres. Stimuli picked up by the sense organs are transmitted to the brain where they are interpreted to give the correct information.

Hair and nails are appendages of the skin formed as a result of the outgrowth or thickening of the epidermis.

Functions of the skin

The skin is not merely an outer covering for the body but it serves a variety of functions.

Protection: The skin protects the inner parts of the body from mechanical injuries. A healthy skin also protects the body from the invasion of disease-causing germs. The nails, hoofs, and horns are also defensive appendages of the skin.

Excretion: Like kidneys, the skin through its sweat glands, eliminates salts, and metabolic waste products in the form of sweat.

Sensory Function : The numerous sense organs and nerve endings hidden in the skin make it an important sensory structure that picks up different stimuli and inform the brain of such changes in environment.

Production of Vitamin D : The skin contains a substance called 7-de-hydro cholesterol which is converted into vitamin D by ultra violet rays of the sun.

Water Balance : Formation and evaporation of sweat is an important factor in the regulation of water balance of the body.

Acid Base Equilibrium : Sweat being acid in reaction, a good amount of acid is excreted through it. In acidosis, it becomes more acid and in this way helps to maintain a constant reaction in the body.

Storage Function : The subcutaneous tissue can store - (a) fat (b) water (c) salts (d) glucose and such other substances.