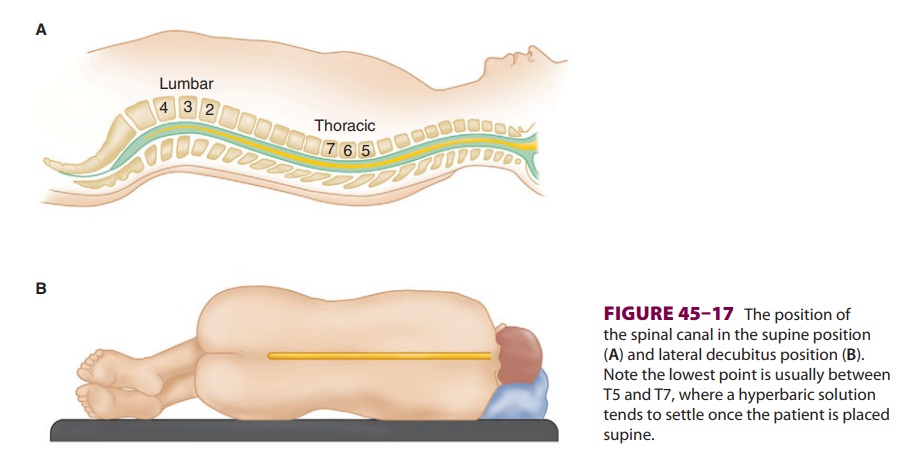 Initially after injection, spinal anesthetic solutions inhibit conduction in nerve roots as they course through the subarachnoid space.

Initially after injection, spinal anesthetic solutions inhibit conduction in nerve roots as they course through the subarachnoid space. Over time, the local anesthetic permeates the spinal cord and likely interacts with other targets located therein. The spinal subarachnoid space extends from the fora-men magnum to the S2 in adults and S3 in children. Injection of local anesthetic below L1 in adults and L3 (below the termination of the conus medullaris) in children helps to avoid direct trauma to the spi-nal cord. Spinal anesthesia is sometimes referred to a subarachnoid block, and it occurs as a result of an intrathecal injection.

Spinal needles are commercially available in an array of sizes lengths, and bevel and tip designs (Figure 45–16). All should have a tightly fitting removable stylet that completely occludes the lumen to avoid tracking epithelial cells into the subarach-noid space. Broadly, they can be divided into either sharp (cutting)-tipped or blunt-tipped needles. The Quincke needle is a cutting needle with end injec-tion. The introduction of blunt tip (pencil-point) needles has markedly decreased the incidence of postdural puncture headache. The Whitacre and other pencil-point needles have rounded points and 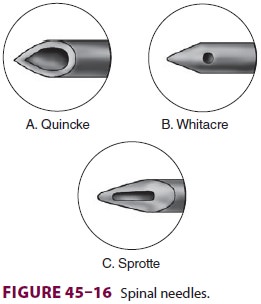 side injection. The Sprotte is a side-injection needle with a long opening. It has the advantage of more vigorous CSF flow compared with similar gauge needles. However, this can lead to a failed block if the distal part of the opening is subarachnoid (with free flow CSF), the proximal part is not past the dura, and the full dose of medication is not delivered. In general, the smaller the gauge needle, the lower the incidence of headache.

Very small subarachnoid catheters are currently no longer approved by the US Food and Drug Admin-istration. The withdrawal of these catheters was prompted by their association with cauda equina syndrome (CES). Larger catheters designed for epi-dural use are associated with relatively high com-plication rates when placed subarachnoid; however, they are frequently used for continuous spinal anes-thesia following accidental dural puncture during performance of epidural anesthesia.

The midline, or paramedian, approaches, with the patient positioned in the lateral decubitus, sitting, or prone positions, can be used for spinal anesthe-sia. As previously discussed, the needle is advanced from skin through the deeper structures until two “pops” are felt. The first is penetration of the liga-mentum flavum, and the second is penetration of the dura–arachnoid membrane. Successful dural puncture is confirmed by withdrawing the stylet to verify free flow of CSF. With small-gauge needles (<25 g), aspiration may be necessary to detect CSF. If free flow occurs initially, but CSF cannot be aspi-rated after attaching the syringe, the needle likely will have moved. Persistent paresthesias or pain with injection of drugs should alert the clinician to with-draw and redirect the needle.

Table 45–2lists factors that have been shown toaffect the level of neural blockade following spinal anesthesia. The most important determinants are baricity of the local anesthetic solution, position of 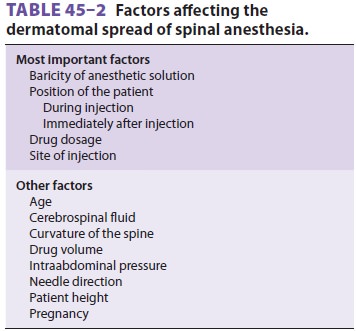 the patient during and immediately after injection, and drug dosage. In general, the larger the dosage or more cephalad the site of injection, the more ceph-alad the level of anesthesia that will be obtained. Moreover, migration of the local anesthetic cepha-lad in CSF depends on its density relative to CSF (baricity). CSF has a specific gravity of 1.003–1.008 at 37°C. Table 45–3 lists the specific gravity of anesthetic solutions. A hyperbaric solution of local anesthetic is denser (heavier) than CSF, whereas a 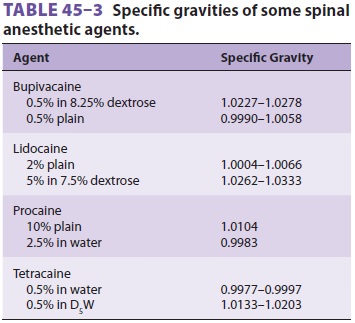 hypobaric solution is less dense (lighter) than CSF. The local anesthetic solutions can be made hyper-baric by the addition of glucose or hypobaric by the addition of sterile water or fentanyl. Thus, with the patient in a head-down position, a hyperbaric solu-tion spreads cephalad, and a hypobaric anesthetic solution moves caudad. A head-up position causes a hyperbaric solution to settle caudad and a hypo-baric solution to ascend cephalad. Similarly, when a patient remains in a lateral position, a hyperbaric spinal solution will have a greater effect on the dependent (down) side, whereas a hypobaric solu-tion will achieve a higher level on the nondependent (up) side. An isobaric solution tends to remain at the level of injection. Anesthetic agents are mixed with CSF (at least 1:1) to make their solutions isobaric. Other factors affecting the level of neural blockade include the level of injection and the patient’s height and vertebral column anatomy. The direction of the needle bevel or injection port may also play a role; higher levels of anesthesia are achieved if the injec-tion is directed cephalad than if the point of injec-tion is oriented laterally or caudad.

Hyperbaric solutions tend to move to the most dependent area of the spine (normally T4–T8 in the supine position). With normal spinal anatomy, the apex of the thoracolumbar curvature is T4 (Figure 45–17). In the supine position, this should limit a hyperbaric solution to produce a level of anesthesia at or below T4. Abnormal curvatures of the spine, such as scoliosis and kyphoscoliosis, have multiple effects on spinal anesthesia. Placing the block becomes more difficult because of the rotation and angulation of the vertebral bodies and spinous processes. Finding the midline and the interlaminar space may be difficult. The paramedian approach to lumbar puncture may be preferable in patients with severe scoliosis and kyphoscoliosis. In the Tay-lor approach, a variant of the standard paramedian approach described previously, the needle enters 1 cm medial and 1 cm inferior to the posterior supe-rior iliac spine and is directed cephalad and toward the midline. Reviewing radiographs of the spine before attempting the block may be useful. Spinal curvature affects the ultimate level by changing the contour of the subarachnoid space. Previous spinal surgery can similarly result in technical difficulties 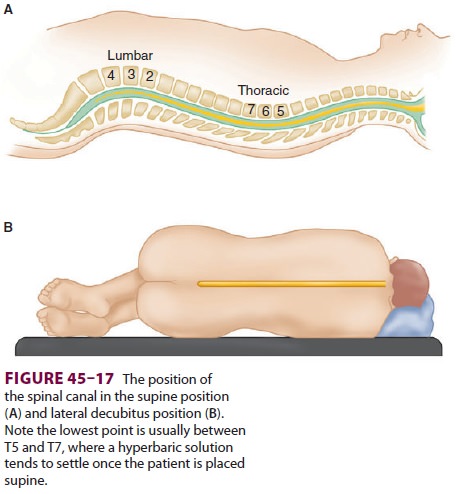 in placing a block. Correctly identifying the inter-spinous and interlaminar spaces may be difficult at the levels of previous laminectomy or spinal fusion. The paramedian approach may be easier, or a level above the surgical site can be chosen. The block may be incomplete, or the level may be different than anticipated, due to postsurgical anatomic changes.

Lumbar CSF volume inversely correlates with the dermatomal spread of spinal anesthesia. Increased intraabdominal pressure or conditions that cause engorgement of the epidural veins, thus decreasing CSF volume, are associated with greater dermatomal spread for a given volume of injectate. This would include conditions such as pregnancy, ascites, and large abdominal tumors. In these clini-cal situations, higher levels of anesthesia are achieved with a given dose of local anesthetic than would oth-erwise be expected. For spinal anesthesia on a term parturient, some clinicians reduce the dosage of anes-thetic by one-third compared with a nonpregnant patient, particularly when the block will be initiated with the patient in the lateral position. Age-related decreases in CSF volume are likely responsible for the higher anesthetic levels achieved in the elderly for a given dosage of spinal anesthetic. Severe kypho-sis or kyphoscoliosis can also be associated with a decreased volume of CSF and often results in a higher than expected level, particularly with a hypobaric technique or rapid injection. Tradition states that transient increases in CSF pressure from coughing or straining increase the spread of local anesthetic in the CSF, but data supporting this are lacking.

Hyperbaric bupivacaine and tetracaine are two of the most commonly used agents for spinal anes-thesia. Both are relatively slow in onset (5–10 min) and have a prolonged duration (90–120 min). Although both agents produce similar sensory lev-els, spinal tetracaine more consistently produces motor blockade than does the equivalent dose of bupivacaine. Addition of epinephrine to spinal

bupivacaine prolongs its duration only modestly. In contrast, epinephrine can prolong the duration of tetracaine by more than 50%. Phenylephrine also prolongs tetracaine anesthesia, but has no effect on bupivacaine spinal blocks. Ropivacaine has also been used for spinal anesthesia, but experience with it is more limited. Lidocaine and procaine have a rel-atively rapid onset (3–5 min) and short duration of action (60–90 min). Their duration is only modestly prolonged by vasoconstrictors. Although lidocaine spinal anesthesia has been used worldwide, some experts no longer use this agent because of the phe-nomenon of transient neurological symptoms and cauda equina syndrome (CES). Repeat lidocainedoses following an initial “failed” block should be avoided. Indeed, studies have shown that maldistri-bution of local anesthetic can lead to a failed spinal in spite of an adequate CSF concentration of local anesthetic. One alternative agent, 2-chloroprocaine, has been used in some centers with great success. Unfortunately, older formulations of this agent have produced cauda equine syndrome when acciden-tally injected intrathecally (in large doses) during attempted epidural anesthesia.

In North America, hyperbaric spinal anesthesia is more commonly used than hypobaric or isobaric techniques. The level of anesthesia is then dependent on the patient’s position during and immediately fol-lowing the injection. In the sitting position, “saddle block” can be achieved by keeping the patient sit-ting for 3–5 min following injection, so that only the lower lumbar nerves and sacral nerves are blocked. If the patient is moved from a sitting position to a

supine position immediately after injection, the agent will move more cephalad to the dependent region defined by the thoracolumbar curve. Hyper-baric anesthetics injected intrathecally with the patient in a lateral decubitus position are useful for unilateral lower extremity procedures. The patient is placed laterally, with the extremity to be operated on in a dependent position. If the patient is kept in this position for about 5 min following injection, the block will tend to be denser and achieve a higher level on the operative dependent side.

If regional anesthesia is chosen for surgical pro-cedures involving hip or lower extremity fracture, hypobaric or isobaric spinal anesthesia can be use-ful because the patient need not lie on the fractured extremity.