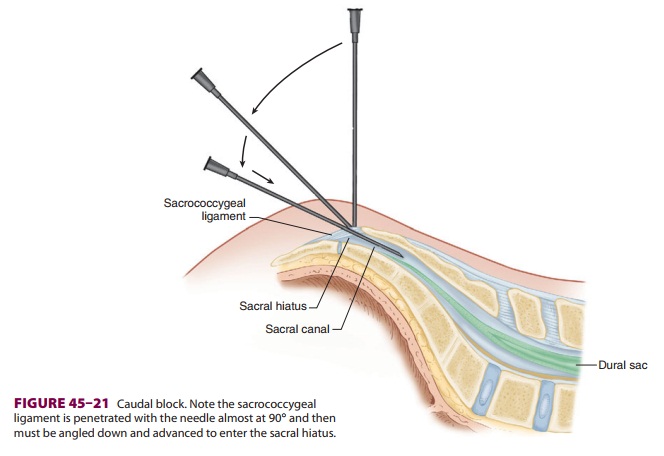 Caudal epidural anesthesia is a common regional technique in pediatric patients. It may also be used for anorectal surgery in adults.

Caudal  epidural  anesthesia  is  a  common regional technique in pediatric patients. It may also be used for anorectal surgery in adults. The caudal space is the sacral portion of the epidural space. Cau-dal anesthesia involves needle and/or catheter penetra-tion of the sacrococcygeal ligament covering the sacral hiatus that is created by the unfused S4 and S5 lami-nae. The hiatus may be felt as a groove or notch above the coccyx and between two bony prominences, the sacral cornua (Figure 45–3). Its anatomy is more eas-ily appreciated in infants and children (Figure 45–20). The posterior superior iliac spines and the sacral hia-tus define an equilateral triangle (Figure 45–13). Cal-cification of the sacrococcygeal ligament may make caudal anesthesia difficult or impossible in older adults. Within the sacral canal, the dural sac extends to the first sacral vertebra in adults and to about the third sacral vertebra in infants, making inadvertent intrathecal injection more common in infants. 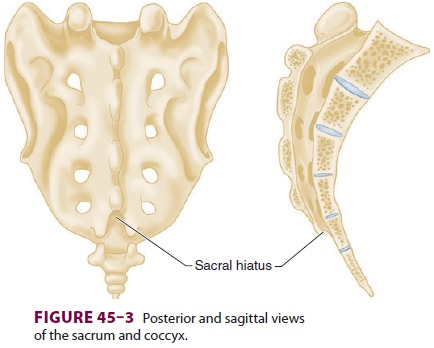 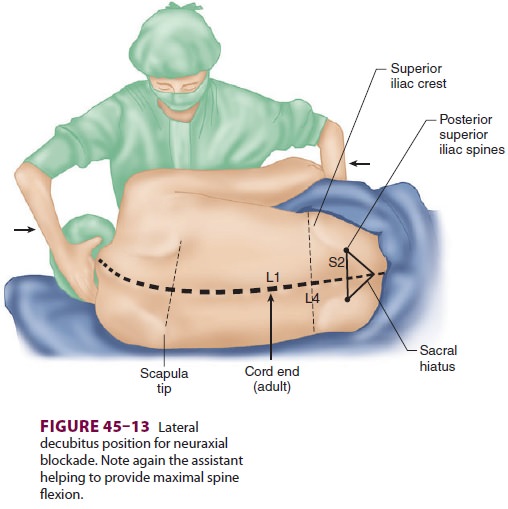 In children, caudal anesthesia is typically com-bined with general anesthesia for intraoperative supplementation and postoperative analgesia. It is commonly used for procedures below the dia-phragm, including urogenital, rectal, inguinal, and lower extremity surgery. Pediatric caudal blocks are most commonly performed after the induc-tion of general anesthesia. The patient is placed in the lateral or prone position with one or both hips flexed, and the sacral hiatus is palpated. After sterile skin preparation, a needle or intravenous catheter 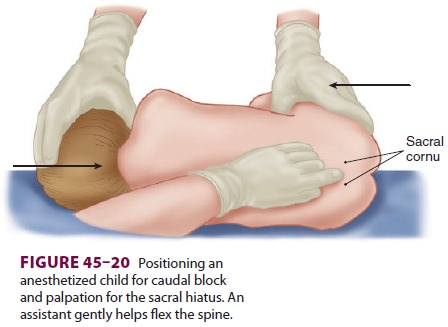 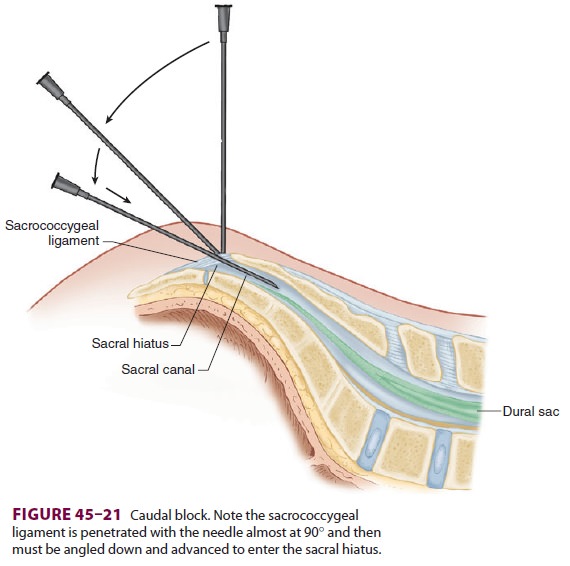 (18–23 gauge) is advanced at a 45° angle cephalad until a pop is felt as the needle pierces the sacrococ-cygeal ligament. The angle of the needle is then flat-tened and advanced ( Figure 45–21). Aspiration for blood and CSF is performed, and, if negative, injec-tion can proceed. Some clinicians recommend test dosing as with other epidural techniques, although many simply rely on incremental dosing with fre-quent aspiration. Tachycardia (if epinephrine is used) and/or increasing size of the T waves on elec-trocardiography may indicate intravascular injec-tion. Clinical data have shown that the complication rate for pediatric caudal blocks is low. Complications include total spinal and intravenous injection, caus-ing seizure or cardiac arrest. Intraosseous injection has also been reported to cause systemic toxicity.

A dosage of 0.5–1.0 mL/kg of 0.125–0.25% bupivacaine (or ropivacaine), with or without epi-nephrine, can be used. Opioids may also be added (eg, 50–70 mcg/kg of morphine), although they are not recommended for outpatients because of the risk of delayed respiratory depression. Addition of epinephrine will tend to increase the degree of motor block. Clonidine is often added or substituted for local anesthetic. The analgesic effects of the block extend for hours into the postoperative period. Pedi-atric outpatients can safely be discharged home, even with mild residual motor block and without urinating, as most children will urinate within 8 hr.

Repeated injections can be accomplished via repeating the needle injection or via a catheter left in place and covered with an occlusive dressing after being connected to extension tubing. Higher der-matomal levels of epidural anesthesia/analgesia can be accomplished with epidural catheters threaded cephalad into the lumbar or even thoracic epidural space from the caudal approach in infants and chil-dren. Fluoroscopy can assist in catheter positioning. Smaller catheters are technically difficult to pass due to kinking. Catheters advanced into the thoracic 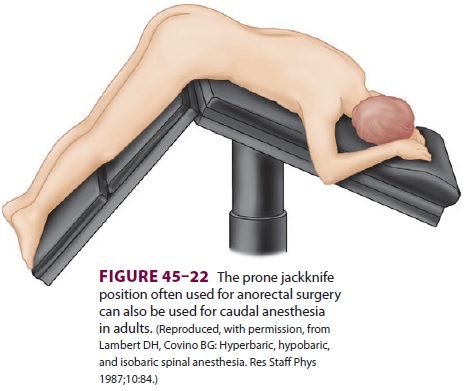 epidural space have been used to achieve T2–T4 blocks for ex-premature infants undergoing inguinal hernia repair. This is achieved using chloroprocaine (1 mL/kg) as an initial bolus and incremental doses of 0.3 mL/kg until the desired level is achieved.

In adults undergoing anorectal procedures, caudal anesthesia can provide dense sacral sensory blockade with limited cephalad spread. Further-more, the injection can be given with the patient in the prone jackknife position, which is used for surgery (Figure 45–22). A dose of 15–20 mL of 1.5–2.0% lidocaine, with or without epinephrine, is usually effective. Fentanyl 50–100 mcg may also be added. This technique should be avoided in patients with pilonidal cysts because the needle may pass through the cyst track and can potentially introduce bacteria into the caudal epidural space. Although no longer commonly used for obstetric analgesia, a cau-dal block can be useful for the second stage of labor, in situations in which the epidural is not reaching the sacral nerves, or when repeated attempts at epi-dural blockade have been unsuccessful.