The epidural agent is chosen based on the desired clinical effect, whether it is to be used as a primary anesthetic, supplementation of general anesthesia, or analgesia.

The epidural agent is chosen based on the desired clinical effect, whether it is to be used as a pri-mary anesthetic, supplementation of general anes-thesia, or analgesia. The anticipated duration of the procedure may call for a short- or long-acting single shot anesthetic or the insertion of a catheter (Table 45–5). Commonly used short- to interme-diate-acting agents for surgical anesthesia include chloroprocaine, lidocaine, and mepivacaine. Longer acting agents include bupivacaine, levobupivacaine, and ropivacaine. Only preservative-free local anes-thetic solutions or those specifically labeled for epi-dural or caudal use are employed. 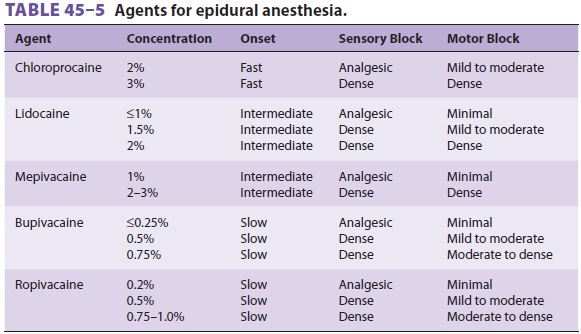 Following the initial 1–2 mL per segment bolus (in fractionated doses), repeat doses deliv-ered through an epidural catheter are either done on a fixed time interval, based on the practitioner’s experience with the agent, or when the block dem-onstrates some degree of regression. Once some regression in sensory level has occurred, one-third to one-half of the initial activation dose can gener-ally safely be reinjected in incremental doses.

It should be noted that chloroprocaine, an ester with rapid onset, short duration, and extremely low toxicity, may interfere with the analgesic effects of epidural opioids. Previous chloroprocaine formu-lations with preservatives, specifically bisulfite and ethylenediaminetetraacetic acid (EDTA), produced cauda equine syndrome when accidentally injected in a large volume intrathecally. Bisulfite preparations of chloroprocaine were believed to be associated with neurotoxicity, whereas EDTA formulations were associated with severe back pain (presumably due to localized hypocalcemia). Current preparations of chloroprocaine are preservative-free and without these complications. Some experts believe that local anesthetics, when injected in very large doses intra-thecally may have been at least partly responsible for neurotoxicity.

Surgical anesthesia is obtained with a 0.5% bupivacaine formulation. The 0.75% formulation of bupivacaine is no longer used in obstetrics, as its use in cesarean section has been associated with reports of cardiac arrest after accidental intravenous injec-tion. Very dilute concentrations of bupivacaine (eg, 0.0625%) are commonly combined with fentanyl and used for analgesia for labor and postoperative pain. Compared with bupivacaine, ropivacaine may produce less motor block at similar concentrations while maintaining a good sensory block.