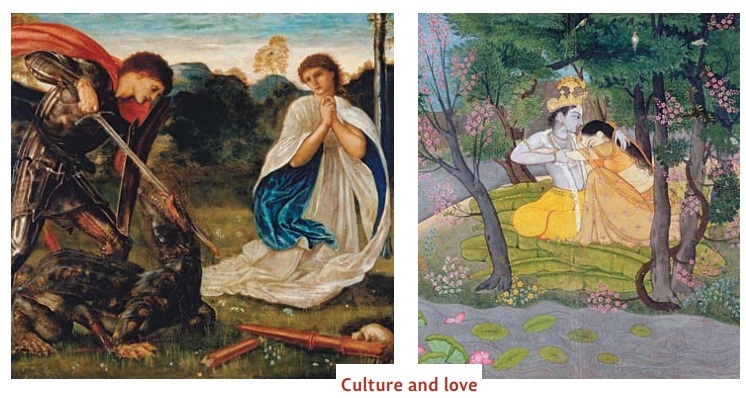 Attraction tends to bring people closer together. If they are close enough, their relationship may be more than friendship and become something we celebrate with the term love.

Attraction tends to bring people closer together. If they are close enough, their relationship may be more than friendship and become something we celebrate with the term love. In fact, love involves many elements: a feeling, a physiological upheaval, a desire for sexual union, a set of living and parenting arrangements, a sharing of resources (from bank accounts to friends), a mutual defense and caretaking pact, a merging of extended families, and more. So complex is human love that, according to some authorities, psychologists might have been “wise to have abdicated responsibility for analysis of this term and left it to poets”. Wise or not, psychol-ogists have tried to say some things about this strange state of mind that has puzzled both sages and poets throughout the ages.

Psychologists distinguish among different kinds of love, and some of the resulting classification systems are rather complex. One scheme tries to analyze love relation-ships according to the presence or absence of three main components: intimacy (feel-ings of being close), passion (sexual attraction), and commitment (a decision to stay with one’s partner) (Sternberg, 1986, 1988). Other psychologists propose that there are two broad categories of love. One is romantic—or passionate—love, the kind of love that one “falls into,” that one is “in.” The other is companionate love, a less turbulent state that emphasizes companionship, mutual trust, and care (Hatfield, 1988).

Romantic love has been described as essentially passionate: “a wildly emotional state[in which] tender and sexual feelings, elation and pain, anxiety and relief, altruism and jealousy coexist in a confusion of feelings”. Lovers feel that they are in the grip of an emotion they cannot control, which comes across in the very language they use to describe their love. They “fall in love,” “are swept off their feet,” and “can’t stop themselves.” Perhaps surprisingly, men tend to fall in love more often and more quickly than women do, and women tend to fall out of love more easily than men do (Hill, Rubin, & Peplau, 1976). 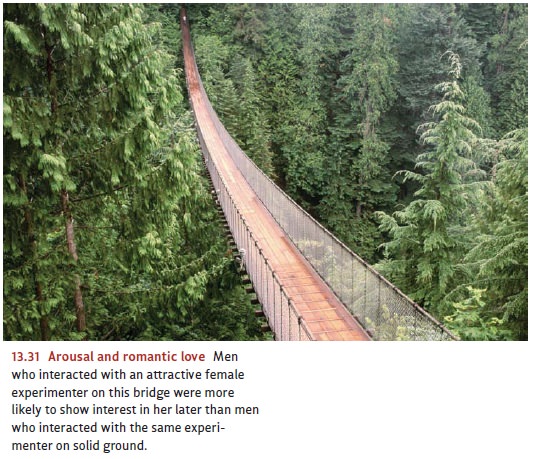 men were approached by an attractive young woman who asked them to fill out a ques-tionnaire (allegedly to help her with a class project); she then gave them her telephone number so they could call her later if they wanted to know more about the project. The study was conducted in Capilano Park, just north of Vancouver, British Columbia. The park is famous for its narrow, wobbly suspension bridge, precariously suspended over a shallow rapids 230 feet below (Figure 13.31). Some of the men in the study were approached while they were on the bridge itself. Others were approached after they had already crossed the bridge and were back on solid ground.

Did the men actually call the young woman later—ostensibly to discuss the experiment, but really to ask her for a date? The likelihood of their making this call depended on whether they were approached while they were on the bridge or later, after they had crossed it. If they filled out the questionnaire while crossing the bridge—at which point they might well have felt some fear and excitement—the chances were almost one in three that the men would call. If they met the young woman when they were back on safe ground, the chances of their doing so were very much lower (Dutton & Aron, 1974; but see also Kenrick & Cialdini, 1977; Kenrick, Cialdini, & Linder, 1979). What is going on here? One way to think about it is to call to mind the Schachter-Singer theory of emotion. Being on the bridge would make almost anyone feel a little jittery—it would, in other words, cause a state of arousal. The men who were approached while on the bridge detected this arousal, but they seem to have misinterpreted their own feelings, attributing their elevated heart rate and sweaty palms not to fear, but to their interest in the woman. Then, having misread their own state, they followed through in a sensible way, telephoning a woman whom they believed had excited them.

This sequence of events may help us understand why romantic love seems to thrive on obstacles. Shakespeare tells us that the “course of true love never did run smooth,” but if it had, the resulting love probably would have been lacking in ardor. The fervor of a wartime romance or an illicit affair is probably fed in part by danger and frustra-tion, and many a lover’s passion becomes all the more intense for being unrequited. All of these cases involve increased arousal, whether through fear, frustration, or anx-iety. We interpret this arousal as love, a cognitive appraisal that fits in perfectly with our romantic ideals, which include both the rapture of love and the agony. 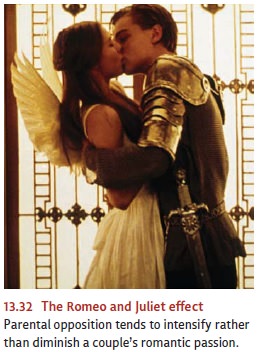 An interesting demonstration of this phenomenon is the so-called Romeo-and-Juliet effect (named after Shakespeare’s doomed couple, whose parents violentlyopposed their love; Figure 13.32). This term describes the fact that parental opposition tends to intensify a couple’s romantic passion rather than to diminish it. In one study, couples were asked whether their parents interfered with their relationship. The greater this interference, the more deeply the couples fell in love (Driscoll, Davis, & Lipetz, 1972). The moral is that if parents want to break up a romance, their best bet is to ignore it. If the feuding Montagues and Capulets had simply looked the other way, Romeo and Juliet might well have become bored with each other by the end of the second act.

Romantic love tends to be a short-lived bloom. That wild and tumultuous state, with its intense emotional ups and downs, with its obsessions, fantasies, and idealizations, rarely, if ever, lasts forever. Eventually the adventure is over, and romantic love ebbs. Sometimes it turns into indifference or active dislike. Other times (and hopefully more often) it transforms into a related but gentler state of affairs—companionate love (Figure 13.33). This type of love is sometimes defined as the “affection we feel for those with whom our lives are deeply intertwined”. In companionate love, the similarity of outlook, mutual caring, and trust that develop through day-to-day living become more important than the fantasies and idealization of romantic love, as the two partners try to live as happily ever after as it is possible to do in the real world. This is not to say that the earlier passion does not flare up occa-sionally. But it no longer has the obsessive quality that it once had, in which the lover is unable to think of anything but the beloved (Caspi & Herbener, 1990; Hatfield, 1988; Neimeyer, 1984). 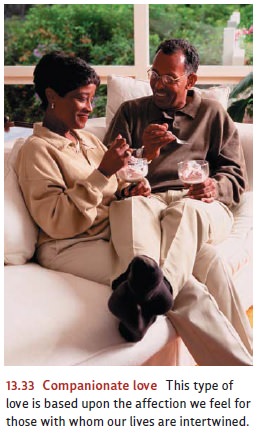 It will come as no surprise that concep-tions of love are—like the many other aspects of our interactions with others—a cultural product. Western cultural notions of what love is and what falling in love feels like have been fashioned by a histori-cal heritage that goes back to Greek and Roman times (with tales of lovers hit by Cupid’s arrows), was revived during the Middle Ages (with knights in armor slay-ing dragons to win a lady’s favor), and was finally mass-produced by Hollywood (with a final fade-out in which the couple embraces and lives happily ever after). This complex set of ideas about what love is, and who is an appropriate potential love object, constitutes the context that may lead us to interpret physiological arousal as love. 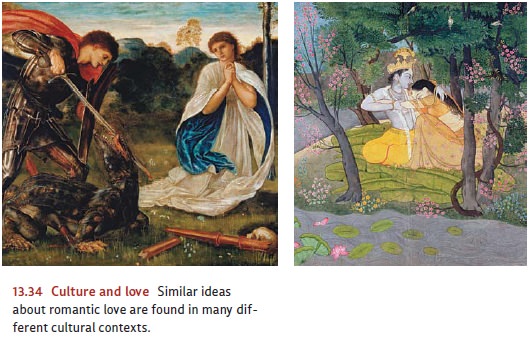 Similar ideas about romantic love are found in many other cultures (Figure 13.34). Hindu myths and Chinese love songs, for example, celebrate this form of love, and, indeed, a review of the anthropological research revealed that romantic love was pres-ent in 147 of 166 cultures (Jankowiak & Fischer, 1992). Even so, it seems unlikely that any other culture has emphasized romantic love over companionate love to the extent that Western culture does (e.g., De Rougemont, 1940; V. W. Grant, 1976). This is reflected in many ways, including the fact that popular American love songs are only half as likely as popular Chinese love songs to refer to loyalty, commitment, and endur-ing friendship, all features of companionate love (Rothbaum & Tsang, 1998).