Acts of aggression or acts of helping often involve isolated incidents. Someone cuts you off in traffic, and you angrily honk your horn; a stranger on a street corner asks you for a few coins, and you do (or perhaps don’t) give some. Other forms of social relationship are more enduring—and can color your life for many years. These long-lasting relation-ships include friendship and the exciting, comforting, and sometimes vexing relation that we call love.

What initially draws people together as friends or lovers? How do we win someone’s affections? How do close relationships change over the long term?

Common sense tells us that physical appearance is an important determinant of attrac-tion, and formal evidence confirms that point. In one study, freshmen were randomly paired at a dance and later asked how much they liked their partner and whether he or she was someone they might want to date. After this brief encounter, what mainly determined each person’s desirability as a future date was his or her physical attractive-ness (Walster, Aronson, Abrahams, & Rottman, 1966). Similar results were found among clients of a commercial dating service who selected partners based on files that included a photograph, background information, and details about interests, hobbies, and personal ideals. When it came down to the actual choice, the primary determinant was the photograph (S. K. Green, Buchanan, & Heuer, 1984).

Physically attractive individuals also benefit from the common tendency to associate physical attractiveness with a variety of other positive traits, including intelligence, happiness, and good mental health (e.g., Bessenoff & Sherman, 2000; Dion, Berscheid, & Walster, 1972; Eagly, Ashmore, Makhijani, & Longo, 1991; Feingold, 1992; Jackson, Hunter, & Hodge, 1995; Langlois et al., 2000). This is, in fact, part of a larger pattern sometimes referred to as the halo effect, a term that refers to our tendency to assume that people who have one good trait are likely to have others (and, conversely, that people with one bad trait are likely to be bad in other regards as well). In some cases, there may be a kernel of truth in this pattern of beliefs, but unmistakably the “halo” extends farther than it should (Anderson, Adams, & Plaut, 2008). For example, people seem to make judgments about how competent someone is based only on facial appearance, and so, remarkably, judgments about appearance turn out to be powerful predictors of whom people will vote for in U.S. congressional elections (Todorov, Mandisodza, Goren, & Hall, 2005).

A second important factor in determining attraction is sheer proximity (Figure 13.28). By now, dozens of studies have shown that if you want to predict who will make friends with whom, the first thing to ask is who is nearby. Students who live next to each other in a dormitory or sit next to each other in classes develop stronger relations than those who live or sit only a bit farther away (Back, Schmukle, & Egloff, 2008). Similarly, members of a bomber crew became much friendlier with fellow crew mem-bers who worked right next to them than with others who worked only a few feet away (Berscheid, 1985).

In this case, what holds for friendship also holds for mate selection. The statistics are rather impressive. For example, one classic study considered all the couples who took out marriage licenses in Columbus, Ohio, during the summer of 1949. Among these couples, more than half were people who lived within 16 blocks of each other when they went out on their first date (Clarke, 1952). Much the same holds for the

probability that an engagement will ultimately lead to marriage; the farther apart the two live, the greater the chance that the engagement will be broken off (Berscheid & Walster, 1978).

Why is proximity so important? Part of the answer simply involves logistics rather than psychology. You cannot like someone you have never met, and the chances of meeting that someone are much greater if he is nearby. In addition, even if you have met someone and begun a relationship, distance can strain it. Indeed, the prospect of commuting and of communicating only by email and phone calls corrodes many marriages and ends many high school romances.

Beyond these obvious points, though, it also turns out that getting to know some-one makes him more familiar to you, and familiarity in turn is itself a source of attrac-tion. Indeed, whether we are evaluating a word in a foreign language, a melody, or the name of a commercial product, studies indicate that the more often something is seen or heard, the better it will be liked (Coates, Butler, & Berry, 2006; Moreland & Zajonc, 1982; Zajonc, 1968; also see Norton, Frost, & Ariely, 2007). Familiarity probably plays an important role in determining what we feel about other people as well. For example, people judge photographs of strangers’ faces to be more likable the more often they have seen them (Jorgensen & Cervone, 1978). Likewise, which is preferred—a photo of a familiar face, or a mirror-image of that photo? If familiarity is the critical variable, our friends should prefer a photograph of our face to one of its mirror image, since they have seen the first much more often than the second. But we ourselves should prefer the mirror image, which for us is far more familiar. These predictions turn out to be correct (Mita, Dermer, & Knight, 1977; Figure 13.29). 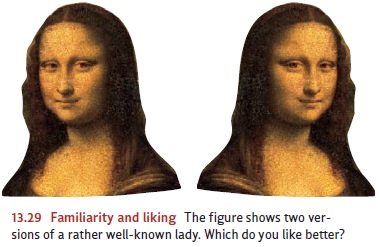 Another important factor that influences attraction is similarity, but in which direction does the effect run? Do “birds of a feather flock together” or—perhaps in analogy with magnets—do “opposites attract”? Birds have more to teach us in this matter than do magnets—the evidence suggests that, in general, people tend to like others who are similar to themselves (Figure 13.30). For example, elementary school students prefer other children who perform about as well as they do in academics, sports, and music (Tesser, Campbell, & Smith, 1984), and best friends in high school tend to resemble each other in age, race, year in school, and grades (D. B. Kandel, 1978). 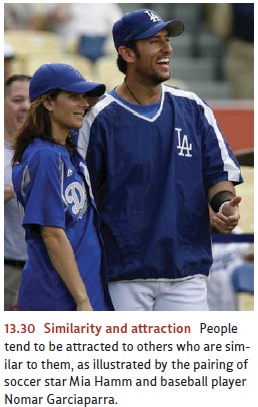 Often people who attract each other do differ in important personality characteris-tics, so that an unaggressive person might be attracted to someone relatively aggressive. On other dimensions, though, similarity is crucial. For example, attributes such as race, ethnic origin, social and educational level, family background, income, and religion do affect attraction in general and marital choice in particular. Also relevant are behavioral patterns such as the degree of gregariousness and drinking and smoking habits. One widely cited study showed that engaged couples in the United States tend to be similar along all of these dimensions (Burgess & Wallin, 1943), a pattern that provides evi-dence for homogamy—a powerful tendency for like to select like.

What produces the homogamy pattern? One possibility is that similarity really does lead to mutual liking, so that homogamy can be taken at face value. A different possi-bility, though, is that similarity does not matter on its own; instead, the apparent effects of similarity may be a by-product of proximity, of the fact that “few of us have an opportunity to meet, interact with, become attracted to, and marry a person markedly dissimilar from ourselves”. The answer is uncertain, but in either case, the end result is the same. Like pairs with like, and heiresses rarely marry the butler except in the movies. We are not really surprised when a princess kisses a frog and he turns into a prince. But we would be surprised to see the frog turn into a peasant and then see the princess marry him anyway.