One of our great sources of pride as a species is our ability to exhibit prosocial behav-iors, behaviors that help others—assisting them in their various activities, supporting and aiding them in their time of need.

One of our great sources of pride as a species is our ability to exhibit prosocial behav-iors, behaviors that help others—assisting them in their various activities, supporting and aiding them in their time of need. But, of course, we don’t always help. Sometimes we ignore the homeless man as we walk by him; sometimes we throw away a charity’s fundraising plea; sometimes we scurry past the person who has just dropped his groceries. The question we need to ask, then, is why we sometimes help and sometimes don’t. The answer, once again, involves a mix of factors—including our personalities (whether we tend to be helpful overall) and our social environment.

THE BY STANDER EFFECT

Consider the case of Kitty Genovese, who was attacked and murdered one early morn-ing in 1964 on a street in Queens, New York (Figure 13.24). While the details of the case are disputed (Manning, Levine, & Collins, 2007), it is clear that the assault lasted over half an hour, during which time Genovese screamed and struggled while her assailant stabbed her repeatedly. Many of her neighbors could see or hear her struggle but did not come to her aid. Why not? Why, in general, do we often fail to help those who are obviously in need—perhaps even in extreme danger? 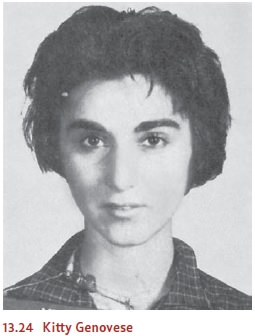 According to Latané and Darley, the failure to help is often produced by the way peo-ple understand the situation. It’s not that people don’t care. It’s that they don’t under-stand what should be done because the situation is ambiguous. In the Genovese case, witnesses later reported that they were not sure what was happening. Perhaps it was a joke, a drunken argument, a lovers’ quarrel. If it were any of these, intervention might have been very embarrassing.

The situation is further complicated by the fact that the various witnesses to the Genovese murder realized that others were seeing or hearing what they did. This circumstance created pluralistic ignorance. Each of the witnesses was uncertain whether there really was an emergency, and each looked to the others, trying to decide. Their rea-soning was simple: “If my neighbors don’t react, then apparently they’ve decided there’s no emergency, and, if there’s no emergency, there’s no reason for me to react.” The tragedy, of course, is that the neighbors were thinking roughly the same thoughts—with the consequence that each took the inactivity of the others as a cue to do nothing.

Even when people are convinced that they are viewing an emergency, the presence of multiple bystanders still has an effect. It creates a diffusion of responsibility, with each bystander persuaded that someone else will respond to the emergency, someone else will take the responsibility. This effect is illustrated by a study in which participants were asked to join in what they thought was a group discussion about college life with either one, three, or five other people. Participants sat in individual cubicles and took turns talking to each other over an intercom system. In actuality, though, there was only one participant; all the other speakers were voices on a previously recorded tape. The discussion began as one of these other speakers described some of his personal prob-lems, which included a tendency toward epileptic seizures in times of stress. When he began to speak again during the second round of talking, he seemed to have a seizure and gasped for help. At issue was what would happen next. Would the actual partici-pant take action to help this other person apparently in distress?

The answer was powerfully influenced by the “crowd size.” If the participant believed that she had been having just a two-way discussion (so that there was no one else around to help the person in distress), she was likely to leave her own cubicle to help. But if the participant thought it was a group discussion, a diffusion of responsibility occurred, and the larger the group the participant thought she was in, the less likely she was to come to the victim’s assistance (Darley & Latané, 1968).

This bystander effect has been demonstrated in numerous other situations. In some, an actor posing as a fellow participant seems to have an asthma attack; in others, someone appears to faint in an adjacent room; in still others, the laboratory fills with

smoke. Whatever the emergency, the result is always the same. The larger the group the participant is in (or thinks he is in), the smaller the chance that he will take any action (Latané & Nida, 1981; Latané, Nida, & Wilson, 1981; Figure 13.25). 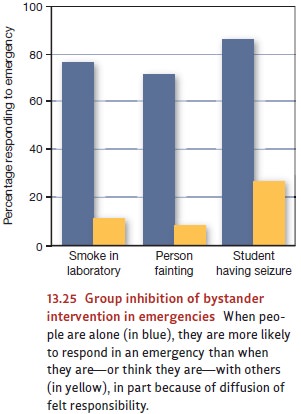 One important qualification, however, is that larger (perceived) groups seem to breed less helping only when the group members are strangers. When group mem-bers are familiar others, larger group size can actually encourage helping behavior (M. Levine & Crowther, 2008). But this, too, makes sense if we consider the costs of not helping and the benefits of helping. First, your not taking action shifts the burden to someone else in the crowd—and if that other person is someone you’re familiar with, you may feel uncomfortable imposing on them in this way. Second, there’s likely to be some embarrassment at not helping in an emergency situation, and that embarrassment grows if you are with people you will be seeing again. Finally, taking action among friends has the benefit of enhancing social cohesion and increasing a sense of pride in group membership. Whether among strangers or friends, then, it appears that the social setting guides your actions.

THE  COST OF HELPING

In one study, for example, students had to go one at a time from one campus build-ing to another to give a talk. They were told to hurry, since they were already late. As students rushed to their appointments, they passed a shabbily dressed man lying in a doorway groaning. Only 10% of the students stopped to help this disguised confeder-ate. Ironically, the students were attending a theological seminary, and the topic of their talk was the parable of the Good Samaritan who came to the aid of a man lying injured on a roadside (Figure 13.26). It appears that if the cost—here in time—is high enough, even theological students may not behave altruistically (Darley & Batson, 1973). 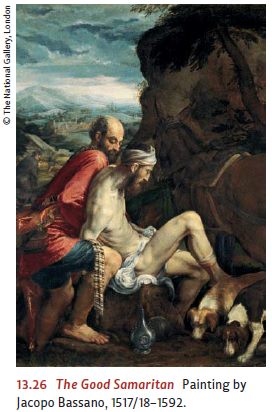 What is costly to one potential helper may not be equally so to another, however. Take physical danger. It is probably not surprising that bystanders who intervene in assault cases are generally much taller, stronger, and better trained to intervene than bystanders who do not intervene, and they are almost invariably men (Eagly & Crowley, 1986; Huston, Ruggiero, Conner, & Geis, 1981).

In addition, the costs of providing help are sometimes weighed against the benefits of helping. Some of the benefits are various signs of social approval, as with a donor to charity who is sure to make a lavish contribution so long as everyone knows. A differ-ent benefit is one we alluded to earlier—namely, the avoidance of shame or embarrass-ment. Many city dwellers give 50 or 75 cents to a homeless person, for example, not because they want to help but because it would be embarrassing just to say no. Occasionally, the benefits of giving involve sexual attraction. In one study, the investi-gators posed as motorists in distress trying to flag passing cars to provide help with a flat tire. The passing cars were much more likely to stop for a woman than for a man, and the cars that stopped were generally driven by young men alone. The best guess is that the young men’s altruism was not entirely unalloyed by sexual interest (West, Whitney, & Schnedler, 1975).

One additional factor that shapes whether people help each other is their cultural context. Compared to Hindu Indians, for example, European Americans are less likely to see that they have a moral imperative to help someone if they do not like that person (J. G. Miller & Bersoff, 1998). European Americans also see less of a moral imperative to help someone who has helped them in the past (J. G. Miller, Bersoff, & Harwood, 1990). And because of the cultural emphasis on taking care of “number one,” Americans will say that they are acting out of self-interest, even when they are not (D. T. Miller, 1999). Overall, these findings suggest that cultural emphasis on self-reliance and self-interest may cause Americans and other members of individualistic societies to think twice before helping, while the cultural emphasis on relationships and connection may cause members of collectivistic societies to offer aid more readily.

ALTRUISM AND SELF - INTEREST

The preceding discussion suggests a somewhat unflattering portrait of human nature, especially for those of us in individualistic cultures. It seems that we often fail to help strangers in need, and when we do, our help is rather grudging and calculated, based on some expectation of later reciprocation. But that picture may be too one-sided. For while people can be callous and indifferent, they are also capable of true generosity and even, at times, of altruism, or helping behavior that does not benefit the helper (Figure 13.27). People share food, give blood, contribute to charities, volunteer at AIDS hospices, and resuscitate accident victims. Even more impressive are the unselfish deeds of living, genetically unrelated donors who give one of their kidneys to a stranger who would oth-erwise die (Sadler, Davison, Carroll, & Kounts, 1971). Consider too those commemorated by Jerusalem’s Avenue of the Righteous—the European Christians who sheltered Jews during the Holocaust, risking (and often sacrificing) their own lives to save those to whom they gave refuge (London, 1970). 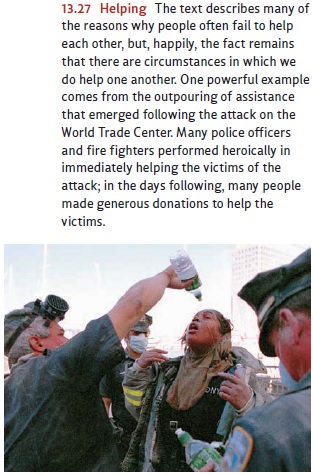 Why do people engage in these activities? When asked, most report that such altruistic actions make them better people (Piliavin & Callero, 1991; M. Snyder & Omoto, 1992), and the major texts of all major religions support this idea (Norenzayan & Shariff, 2008). Such acts of altruism suggest that human behavior is not always selfish. To be sure, acts of altru-ism in which the giver gets no benefits at all—no gratitude, no public acclaim—are fairly rare. The true miracle is that they occur at all.