Conformity is one way that other people influence us. Another way is obedience, when people change their behavior because someone tells them to.

Conformity is one way that other people influence us. Another way is obedience, when people change their behavior because someone tells them to. A certain degree of obedi-ence is a necessary ingredient of social life. After all, in any society some individuals need to have authority over others, at least within a limited sphere. Someone needs to direct traffic; someone needs to tell people when they should put their garbage out at the curb for collection; someone needs to instruct children and get them to do their homework (Figure 13.16). But obedience can also lead people to violate their own prin-ciples and do things they previously felt they should not do. The atrocities of the last 100 years—the Nazi death camps, the Soviet “purges,” the Cambodian massacres, the Rwandan and Sudanese genocides—give terrible proof that the disposition to obedi-ence can become a corrosive poison. 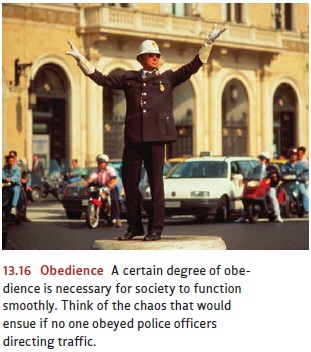 Why were people so obedient in these situations? Psychologists trying to answer this question have adopted two different approaches. One is based on the intuitively appealing notion that some individuals who are more obedient than others are the pri-mary culprits. The other emphasizes the social situation in which the obedient person finds herself.

A half century ago, investigators proposed that it was people with authoritarian person-alities who were most likely to be highly obedient and to show a cluster of traits relatedto their obedience. They are prejudiced against various minority groups and hold cer-tain sentiments about authority, including a general belief that the world is best gov-erned by a system of power and dominance in which each of us must submit to those above us and show harshness to those below. These authoritarian attitudes can be revealed (and measured) by a test in which people express how much they agree with statements such as “Obedience and respect for authority are the most important virtues children should learn” and “People can be divided into two distinct classes: the weak and the strong” (Adorno et al., 1950).

Contemporary researchers have broadened the conception of the authoritarian personality by analyzing the motivational basis for conservative ideology (Jost, Nosek, & Gosling, 2008), building on the supposition that this ideology—like any belief system—serves the psychological needs of the people who hold these beliefs. In particular, the motivated social cognition perspective maintains that people respond to threat and uncertainty by expressing beliefs that help them to manage their concerns. Evidence supporting this perspective has come from studies showing that political conservatism is positively related to a concern with societal instability and death, a need for order and structure, and an intolerance of ambiguity (e.g., Jost et al., 2003).

A very different approach to obedience is suggested by an often-quoted account of the trial of Adolf Eichmann, the man who oversaw the execution of 6 million Jews and other minorities in the Nazi gas chambers. In describing Eichmann, historian Hannah Arendt noted a certain “banality of evil”: “The trouble with Eichmann was precisely that so many were like him, and that the many were neither perverted nor sadistic, that they were, and still are, terribly and terrifyingly normal”.

What could have led a “normal” man like Eichmann to commit such atrocities? The answer probably lies in the situation in which Eichmann found himself, one that encouraged horrible deeds and powerfully discouraged more humane courses of action. But this simply demands a set of new questions: What makes a situation influential? And how coercive does a situation have to be in order to elicit monstrous acts? Stanley Milgram explored these questions in a series of experiments that are perhaps the best-known studies in all of social psychology (Milgram, 1963). In these studies, Milgram recruited his participants from the local population surrounding Yale University in Connecticut via a newspaper advertisement offering $4.50 per hour to people willing to participate in a study of how punishment affected human learning. 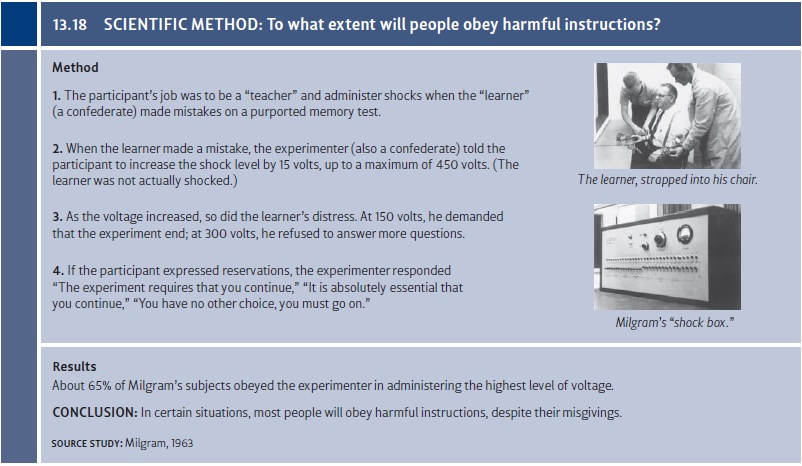 In truth, there was no “learner.” Instead, a middle-aged actor who was a confederate of the experimenter pretended, at the experiment’s start, to be the learner and then retreated into a separate room, with all subsequent communication between teacher and learner conducted over an intercom. And, in fact, the “shock generator” didn’t deliver punishment. The point of the experiment was not to study punishment and learning at all; that was just a cover story. It was actually to determine how far the par-ticipants would go in obeying the experimenter’s instructions.

Within the procedure, the learner made a fair number of (scripted) errors, and so the shocks that the participant delivered kept getting stronger and stronger. By the time 120 volts was reached, the learner shouted that the shocks were becoming too painful. At 150 volts, he demanded that he be let out of the experiment. At 180 volts, he cried out that he could no longer stand the pain, sometimes yelling, “My heart, my heart!” At 300 volts, he screamed, “Get me out of here!” and said he would not answer anymore. At the next few shocks, there were agonized screams. After 330 volts, there was silence.

The learner ’s responses were all predetermined, but the participants—the teachers—did not know that, so they had to decide what to do. When the learner cried out in pain or refused to go on, the participants usually turned to the experimenter for instructions, a form of social referencing. In response, the experimenter told the partic-ipants that the experiment had to go on, indicated that he took full responsibility, and pointed out that “the shocks may be painful but there is no permanent tissue damage.”

How far did subjects go in obeying the experimenter? The results were astounding: About 65% of Milgram’s subjects—both males and females—obeyed the experimenter to the bitter end. Of course, many of the participants showed signs of being enormously upset by the procedure—they bit their lips, twisted their hands, sweated profusely, and in some cases, laughed nervously. Nonetheless, they did obey—and, in the process, apparently delivered lethal shocks to another human being. (See Burger, 2009, for a contemporary replication that showed obedience rates comparable to those in the initial Milgram reports. For similar data when the study was repeated in countries such as Australia, Germany, and Jordan, see Kilham & Mann, 1974; Mantell & Panzarella, 1976; Shanab & Yahya, 1977.)

These are striking data—suggesting that it takes remarkably little within a situation to produce truly monstrous acts. But we should also note the profound ethical ques-tions raised by this study. Milgram’s participants were of course fully debriefed at the study’s end, and so they knew they had done no damage to the “learner” and had inflicted no pain. But the participants also knew that they had obeyed the researcher and had (apparently) been willing to hurt someone—perhaps quite seriously. We there-fore need to ask whether the scientific gain from this study is worth the cost—includ-ing the horrible self-knowledge the study brought to the participants, or the stress they experienced. This question has been hotly debated, but this doesn’t take away from the main message of the data—namely, it takes very little to get people to obey extreme and inhuman commands.

Why were Milgram’s participants so obedient? Part of the answer may lie in how each of us thinks about commands and authority. In essence, when we are following other people’s orders, we feel that it is they, and not we, who are in control; they, and not we, who are responsible. The soldier following a general’s order and the employee following the boss’s command may see themselves merely as the agents who execute another’s will: the hammer that strikes the nail, not the carpenter who wields it. As such, they feel absolved of responsibility—and, if the consequences are bad, absolved of guilt.

This feeling of being another person’s instrument, with little or no sense of personal responsibility, can be promoted in various ways. One way is by increasing the psychological distance between a person’s actions and their end result. To explore thispossibility, Milgram ran a variation of his procedure in which two “teachers” were involved: one a confederate who administered the shocks, and the other—actually, the real participant—who had to perform subsidiary tasks such as reading the words over a microphone and recording the learner’s responses. In this new role, the participant was still an essential part of the experiment, because if he stopped, the learner would receive no further shocks. In this variation, though, the participant was more removed from the impact of his actions, like a minor cog in a bureaucratic machine. After all, he did not do the actual shocking! Under these conditions, over 90% of the participants went to the limit, continuing with the procedure even at the highest level of shock (Milgram, 1963, 1965; see also Kilham & Mann, 1974).

The obedient person also may reinterpret the situation to diminish any sense of culpability. One common approach is to try to ignore the fact that the recipient of one’s actions is a fellow human being. According to one of Milgram’s participants, “You really begin to forget that there’s a guy out there, even though you can hear him. For a long time I just concentrated on pressing the switches and reading the words”. This dehumanization of the victim allows the obedient per-son to think of the recipient of his actions as an object, not a person, reducing (and perhaps eliminating) any sense of guilt at harming another individual (Bernard, Ottenberg, & Redl, 1965; Goff, Eberhardt, Williams, & Jackson, 2008).

The dehumanization of the victim in Milgram’s study has a clear parallel outside the laboratory. Enemies in war and victims of atrocities are rarely described as people, but instead are referred to as bodies, objects, pests, and numbers (Figure 13.19). This dehu-manization is propped up by euphemistic jargon. The Nazis used terms such as finalsolution (for the mass murder of 6 million people) and special treatment (for death bygassing); the nuclear age contributed fallout problem and preemptive attack; the Vietnam War gave us free-fire zone and body count; other wars gave ethnic cleansing and collateraldamage—all dry, official phrases that keep the thoughts of blood and human sufferingat a psychologically safe distance.

Thus, people obeying morally questionable orders can rely on two different strategies to let themselves off the moral hook—a cognitive reorientation aimed at holding another person responsible for one’s own actions, or a shift toward perceiving the vic-tim as an object, not a person. It is important to realize that neither of these intellectual adjustments happens in an instant. Instead, inculcation is gradual, making it impor-tant that the initial act of obedience be relatively mild and not seriously clash with the person’s own moral outlook. But after that first step, each successive step can be slightly more extreme. In Milgram’s study, this pattern created a slippery slope that participants slid down unawares. A similar program of progressive escalation was used in the indoc-trination of death-camp guards in Nazi Germany and prison-camp guards in Somalia. The same is true for the training of soldiers everywhere. Draftees go through “basic training,” in part to learn various military skills but much more importantly to acquire the habit of instant obedience. Raw recruits are rarely asked to point their guns at another person and shoot. It’s not only that they don’t know how; it’s that most of them probably wouldn’t do it.