Simple tissues are composed of one type of cells only. The cells are structurally and functionally similar. It is of three types. 1. Parenchyma 2. Collenchyma 3. Sclerenchyma

The Permanent tissues develop from apical meristem. They lose the power of cell division either permanently or temporarily. They are classified into two types:

Simple tissues are composed of one type of cells only. The cells are structurally and functionally similar. It is of three types.

Parenchyma is generally present in all organs of the plant. It forms the ground tissue in a plant. Parenchyma is a living tissue and made up of thin walled cells. The cell wall is made up of cellulose. Parenchyma cells may be oval, polyhedral, cylindrical, irregular, elongated or armed. Parenchyma tissue normally has prominent intercellular spaces. Parenchyma may store various types of materials like, water, air, ergastic substances. It is usually colourless. The turgid parenchyma cells help in giving rigidity to the plant body. Partial conduction of water is also maintained through parenchymatous cells. Occsionally Parenchyma cells which store resin, tannins, crystals of calcium carbonate, calcium oxalate are called idioblasts. Parenchyma is of different types and some of them are discussed as follows. 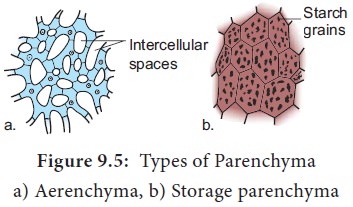 Collenchyma is a simple, living mechanical tissue. Collenchyma generally occurs in hypodermis of dicot stem. It is absent in the roots and also occurs in petioles and pedicels. The cells are elongated and appear polygonal in cross section. The cell wall is unevenly thickened. It contains more of hemicellulose and pectin besides cellulose. It provides mechanical support and elasticity to the growing parts of the plant. Collenchyma consists of narrow cells. It has only a few small chloroplast or none. Tannin maybe present in collenchyma.Based on pattern of pectinisation of the cell wall, there are three types of collenchymas. It is the most common type of collenchyma with irregular arrangement and thickening at the angles where cells meets. Example:Hypodermis of Datura and Nicotiana

The collenchyma cells are irregularly arranged. Cell wall is thickening on the walls bordering intercellular spaces. Example:Hypodermis of Ipomoea

The collenchyma cells are arranged compactly in layers(rows). The Cell wall is thickening is at tangential walls.These thickening appear as successsive tangential layers. Example:Hypodermis of Helianthus Annular Collenchyma: Duchaigne (1955) reported another type called Annular collenchyma in petiole of Nerium. The lumen is more or less circular in shape.

Sclereids are dead cells, usually these are isodiametric but some are elongated too. The cell wall is very thick due to lignification. Lumen is very much reduced. The pits may simple or branched. Sclereids are mechanical in function. They give hard texture to the seed coats, endosperms etc., Sclereids are classified into the following types.

Isodiametric sclereids, with hard cell wall. It is found in bark, pith cortex, hard endosperm and fleshy portion of some fruits. Example: - Pulp of Pyrus.

Rod shaped with dilated ends. They occur in leaves and seed coats. Example: seed coat of Pisum and Hakea

Star cells with lobes or arms diverging form a central body. They occur in petioles and leaves. Example: Tea, Nymphae and Trochodendron.

Hair like thin walled sclereids. Numerous small angular crystals are embedded in the wall of these sclereids, present in stems and leaves of hydrophytes. Example: Nymphaea leaf and Aerial roots of Monstera. Filiform Sclereids: The sclereids are present in the leaf lamina of Olea europaea. They are very much elongated fibre like and about 1m.m length. Sclerenchyma Found in Some Fruits

Fibres are very much elongated sclerenchyma cells with pointed tips. Fibres are dead cells and have lignified walls with narrow lumen. They have simple pits. They provide mechanical strength and protect them from the strong wind. It is also called supporting tissues. Fibres have a great commercial value in cottage and textile industries.

Fibres are of five types

These fibres are associated with the secondary xylem tissue. They are also called xylary fibres. These fibres are derived from the vascular cambium. These are of four types.

a.  Libriform fibres: These fibres have slightly lignified secondary walls with simple pits. These fibres are long and narrow.

b. Fibre tracheids: These are shorter than the libriform fibres with moderate secondary thickenings in the cell walls. Pits are simple or bordered.

d. Gelatinous fibres: Fibres in which lignin is less in amount and cellulose is more in this cell walls.

These fibres are characteristic of tension wood which is formed in the underside of leaning stems and branches.

These fibres are present in the phloem. Natural Bast fibres are strong and cellulosic. Fibres obtaining from the phloem or outer bark of jute, kenaf, flax and hemp plants. The so called pericyclic fibres are actually phloem fibres.

These fibres are produced from the surface of the plant organs. Cotton and silk cotton are the examples.They occur in the testa of seeds.

Fibres obtained from the mesocarp of drupes like Coconut.

Fibres obtained from the leaf of Musa, Agave and Sensciveria.

Fibres in Our Daily Life

Economically fibres may be grouped as follows

1)    Textile Fibres: Fibres utilized for the manufacture of fabrics, netting and cordage etc.

2)    Brush fibre: Fibres utilized for the manufacture of brushes and brooms.